Following a well-established tradition which has seen a number of great coupes produced by the Marque, such as the 404, 504 and 406, which became famous as icons of their times, today the 407 Coupé takes to the stage.

This new coupé with its exclusive style is both elegant and expressive and can comfortably accommodate four passengers and their luggage. Its modular interior with versatile and dynamic characteristics gives it all the credentials of a genuine contemporary touring car. Indeed, the technology chosen for the engines and suspension ensure highly efficient road-holding, guaranteeing active safety of the highest order, as well as convenience, comfort and driving pleasure at all times.
Architecture
The 407 Coupé has a length of 4.815 m and a width of 1.868 m. Its height does not exceed 1.40 m and the front and rear overhangs are 1.08 m and 1.01 m respectively, or + 5.5 cm and + 8.5 cm compared to those of the saloon. 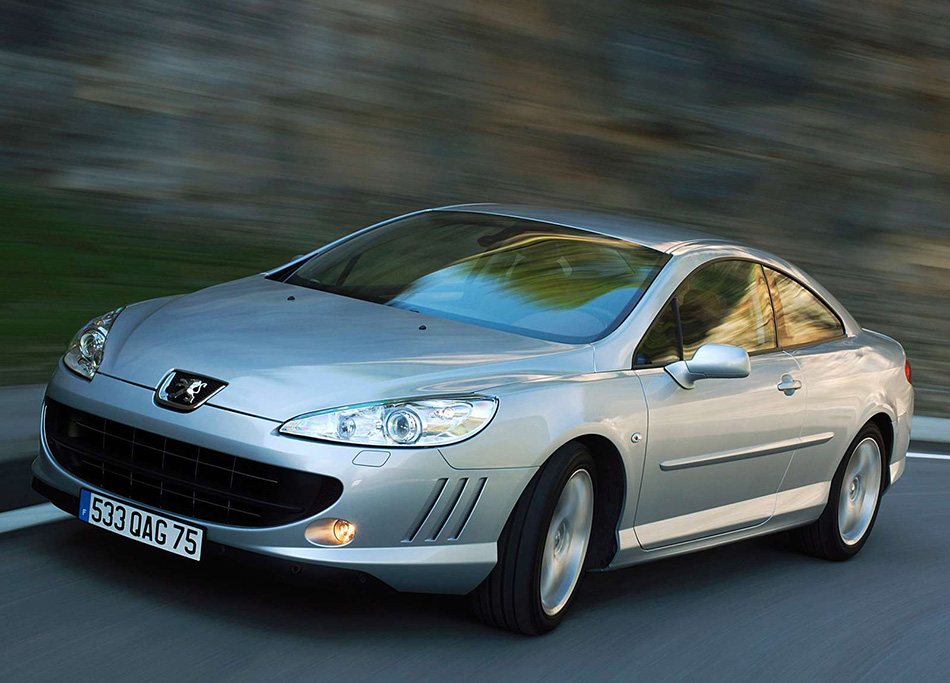 The perception of a large interior space is accentuated further by the large glazed surface area (2.8 m²) and the forward-positioned front windscreen. Like all 407s, the architecture of the driver's seat ensures perfect alignment between the pedal bracket, steering wheel and driving position. Moreover, the many possible adjustments ensure optimal comfort, even for a very tall driver, enhancing both driving pleasure and safety. To give this car a true coupé feel, the driving position has been lowered by 20 mm and set back by 9 mm compared to that of other 407s.

Thanks to its delicately sculpted architecture, this new body radiates balance, elegance and dynamism. Its feline look begins with the steeply inclined front windscreen, giving rise to the lines of a low roof which sweeps back to the tailgate with its integral dynamic spoiler. At the rear, the lower panel with its taut lines creates an unmistakeable visual impact, giving the impression that the 407 coupé is about to pounce, even when at a standstill.

The emotion aroused by the style of the vehicle is strengthened by the "look", the taut design of the flanks, and the aerodynamic design of the front shaping the contours of the passenger compartment that is both discreet outside but extremely generous inside.

This highly sculpted coupé accentuates the stylistic codes inaugurated on the 407 range and emphasises the harmonious balance between dynamism and refinement. The 407 Coupé sustains the promise of motoring enjoyment expressed by its bodywork by offering inside an opulent atmosphere with four "separate" seats. Here, echoes of motoring tradition can be found in its instrument panel, its real aluminium detailing and the hand-stitched finish of its leather trim. The special finish of the fascia panel, designed from the outset to set both the saloon and the coupé, is emphasised in the coupé, particularly in versions with leather trim. The variety of special trims available for the passenger compartment places this coupé firmly in the refined world of grand touring cars.

The structure, derived directly from that of the saloon and SW, has been developed specially to accommodate the new body. The structure of the coupé satisfies all the requirements laid down in terms of safety and driving pleasure by offering a torsional rigidity even higher than that of the saloon. Subject to a torsional load and a torque of 100 daNm applied to the axles, the deformation value does not exceed 0.71 mrd, a result hitherto not attained by any of the Marque's vehicles. This guarantees optimal operation of the suspension while enhancing road holding (active safety) and drivability.

This structure is equipped, in addition to the normal upper channel, with a lower channel for the absorption of impact energy. This is achieved by the presence of a long, aluminium sub-frame, also a feature of the front suspension.

The platform, though identical to that of the saloon, has been specially developed to create a vehicle lower by 4.4 cm and, as a direct consequence, a centre of gravity lower by 25 mm. Similarly, the front and rear tracks are wider compared to those of the 407 saloon and SW.

The 407 Coupé also offers undeniable driving pleasure thanks to a choice of modern, high-performance engines available in both petrol and PEF (particle emission filter) Diesel versions.
For the entry model, a 4-cylinder engine with a capacity of 2 231 cm3 is proposed. This 16-valve petrol engine with twin overhead camshafts and balancing shafts develops a maximum power of 120 kW (˜160 bhp) and a maximum torque of 220 Nm. Thanks to an on/off variable timing system (VTC) acting on the intake camshaft, 92% of the maximum torque is available from an engine speed of 2 000 rpm up to 5 500 rpm.

The second petrol engine, featured on the 407 saloon and SW from introduction, is a V6 with a capacity of 2 946 cm3 developing a maximum power of 155 kW (˜ 210 bhp) and a maximum torque of 290 Nm. This engine has four overhead camshafts and 24 valves. The two intake camshafts feature a variable valve timing system (VVT), which ensures optimal filling of the combustion chambers, making the engine both responsive and powerful.

Finally, the 407 Coupé is the first silhouette in the 407 family to feature the all-new Diesel HDi PEF V6 engine, previously only available in the new 607. The engine has a capacity of 2 720 cm3 and four overhead camshafts with 24 valves. It uses a Common Rail direct multi-injection system and it is fitted with a particle emission filter (PEF) with a service interval extended to 210 000 km. It develops a maximum power of 150 kW (˜ 205 bhp) with a maximum torque of 440 Nm, thanks in particular to two variable-geometry turbochargers.

Regardless of the engine under the bonnet, the 407 Coupé comes with a 6-speed gearbox. The 2.2 litre engine is combined with a manual gearbox, while the V6 Diesel engine comes with an automatic gearbox. The V6 petrol engine meanwhile can be equipped with either. These manual or automatic gearboxes offer six speeds adapted to the special power and torque characteristics of each engine.

It is the first time the ML6/C manual gearbox has been fitted to the V6 ES9/A petrol engine, only the final drive ratio differs from that fitted to the 2.2 litre engine (14/69) and that of the V6 3.0 litre (14/67). To ensure dynamic performance for each engine, the gear ratios are therefore lower in the 4-cylinder engine version.

The 6-speed transverse automatic gearbox (AM6) inaugurated on the 407 and then introduced on the 607 is of course offered with both V6 engines. With a torque capacity in excess of 450 Nm, it adapts naturally to the maximum value of 440 Nm developed by the DT17 engine (V6 HDi).

This gearbox, compact in terms of size and weight, offers a dynamic and lively performance without excessive fuel consumption. Each engine differs by the chosen final drive ratio (54/47 for the DT17 and 49/52 for the ES9/A). This gearbox is capable of adapting to the driving style of the driver, who can if desired also choose a more active driving style using the "Porsche Tiptronic System" sequential control. It is equipped with integral electronic management and "event-based" self-adaptability according to the road profile at any given time, steering wheel speed, type of driving adopted, etc…

By reducing loss of engine speed between gear changes, this automatic gearbox offers driving pleasure, while remaining quiet in operation and economical in terms of fuel consumption.