Mazda Motor Corporation confidently heads into the 74th Geneva International Motor Show with the world debut of its newest concept vehicle, the Mazda MX-Flexa. Mazda's fifth concept vehicle presented in the past six months, it demonstrates one possible direction Mazda could take for a future space wagon.

"It's not by chance we chose the Geneva show to launch this important concept," said Stephen Odell, Mazda's Senior Managing Executive Officer in charge of global Sales, Marketing and Customer Service. "The space wagon segment continues to be an important and growing segment in many markets around the world. In Europe, it has exploded in the past five years, growing in some estimations by more than 200 percent in the five largest markets.  We think this is one segment where Mazda can definitely inject a little Zoom-Zoom." 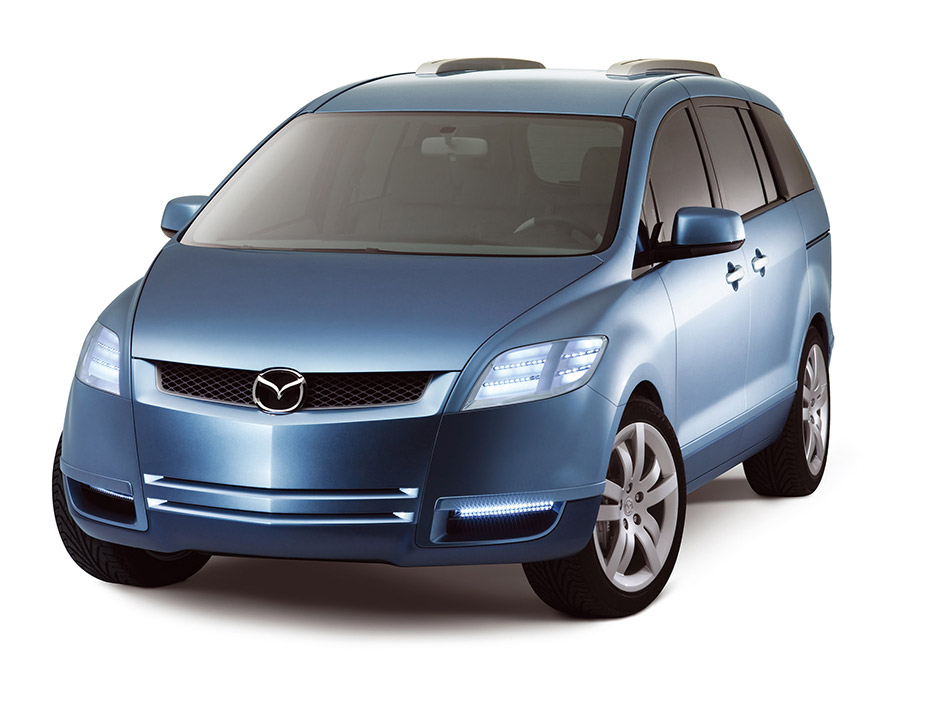 Created at the Mazda Design Studio in Hiroshima under the direction Moray Callum, Mazda Design Director, and Chief Designer Koji Tabata, the Mazda MX-Flexa project has given Mazda's design department the opportunity to introduce some Zoom-Zoom emotion into the space wagon segment and further develop the design language for a future product. The overreaching goal was to present Geneva show-goers with a space wagon that is very solid and athletic looking, a vehicle that, in the words of the designers, "looks dynamic even when standing still." This athletic tension in design has been a theme of many recent products, including the new Mazda RX-8 and recently launched Mazda3.

The Mazda team assembled to support this concept project had a single thesis in mind as they began: successful space wagons must be able to attract new buyers with the right emotional design, a design that is not heavy-handed or over-styled, but graceful and well proportioned. More importantly, a graceful, athletic design must be balanced with innovative packaging solutions that incorporate the practicality and ease-of-use that customers now expect from a space wagon.

"We think customers will react very positively to the intuitive functionality and comfort we are presenting in the Mazda MX-Flexa," said Tabata. "At the same time, we know the real opportunity for Mazda is to push further with emotional designs and tune the vehicle with driving dynamics that make it fun to drive and also very safe. It's simple, we want people to look at the MX-Flexa and think, ‘Zoom-Zoom: Yes, that's a Mazda.'"

The Mazda MX-Flexa concept is based on architecture borrowed from the all-new Mazda3 and modified to support the larger vehicle size and unique customer expectations. While still a concept, the MX-Flexa is tuned to meet the high expectations for Mazda driving performance, particularly in the area of overall vehicle handling.

In very specific terms, the team behind the concept set out to showcase key elements that could improve Mazda's position in the growing space wagon segment, with particular emphasis on adding new levels of emotional appeal. In line with the Mazda brand DNA, the team focused on three areas:

Stylish and Athletic Design — Inside and Out

From the onset, Tabata's design team worked under the very broad guidelines of "Stylish and Athletic."  While these two terms are not usually associated with the space wagon segment, the team pursued this approach by focusing on well-honed, new-generation Mazda design cues.

The vehicle's Sora Blue exterior, for example, relies more heavily on solid proportions and an athletic stance than on forced, artificial surface excitement. The proportions of the Mazda MX-Flexa are carefully balanced to produce a graceful, flowing exterior shape that communicates a sense of dynamic motion. The strong bonnet line and smoothly raked windscreen help provide a sleek overall exterior appearance.

Up front, the design team chose to present a fresh take on Mazda's traditional five-point grille.  While the five-point grille continues to be a signature element in all Mazda products, the design studio continues to offer fresh interpretations of this design cue when developing concept cars. (The Mazda MX-Micro Sport, which is displayed in Geneva alongside the Mazda MX-Flexa, is another example.) Not to be mistaken or confused, however, the large Mazda "Winged M" is positioned proudly in the centre of  Mazda MX-Flexa's grille.

The side view of the Mazda MX-Flexa is particularly strong, with an emphasis on the low roofline and attractive silhouette. This is the result of an effort to create an overall feeling of solidity with the vehicle. The side view is enhanced by short front and rear overhangs that compliment the sophisticated, five-spoke 18-inch wheels. The position of the wheels, in combination with the short overhangs and wide body, further express the vehicle's overall athletic, agile stance.

The interior team of the Mazda MX-Flexa developed a cohesive design that communicates a certain freshness and openness.  White, silver and blue surfaces were used to emphasize brightness within the interior space. And to ensure an emotional connection with consumers, the design team carefully chose materials, colour schemes and forms that would exude a high level of quality and spark an emotional response. The goal was to realize a concept interior that would equally balance utility, comfort and quality.

Their success is evident in an instrument panel, rendered in a sparkling silver finish that offers exceptional visibility and a fresh, bright appearance with its overlapping three-meter cluster. The main controls have been assembled in the instrument panel centre console for improved visibility and ease of operation, while the shift lever is located in the centre panel, neatly combined with the other key controls and in perfect reach of the driver.

The cabin layout of the Mazda MX-Flexa features six seats, all of them individual, leather-covered captain-style chairs. All six chairs are nearly identical in width to ensure almost uniform comfort throughout the cabin, even in the third row.

The Mazda MX-Flexa concept is driven by the insight that true vehicle "usability" actually comes from "flexibility," the word from which Mazda's latest concept derives its name. From Karakuri-type seats (which allow users to easily fold the seats using only one hand), to the idea of a four-door sports car, insight into "usability" has long been a key attribute of all Mazda vehicles.

With the Mazda MX-Flexa concept, this flexibility is demonstrated in the innovative E-ZZ-FOUR bike rack system. Combined with the vehicle's flexible seating — four of the six seats can be individually folded flat — the MX-Flexa can carry up to four bicycles: two inside the vehicle and two outside. The E-ZZ-FOUR bike rack system features four sliding rails, two of which are integrated into the ceiling within the cabin and two on the roof, offering great flexibility in transporting both bikes and cargo. Bikes are attached directly to the four rails, and then slid neatly into place. One key design target of the bike rack system was to ensure clean integration into the overall vehicle design, in both the interior and the exterior.

The amount of interior space is often times a measure of a vehicle's flexibility — simply put, the more space in the cabin, the more an owner can do. Interior space, however, must always be balanced against exterior dimensions, as larger vehicles are often compromised by being harder to manoeuvre in tight spots and less agile in terms of driving dynamics.

With the MX-Flexa concept, Mazda presents what it believes to be the right balance between exterior dimensions, which form the basis for superior driving attributes, and interior room. With an overall length of 4470 mm, a width of 1745 mm and a wheelbase  of 2750 mm, the concept's interior is roomy and comfortable.

Adding to the flexibility and roominess of the Mazda MX-Flexa are dual sliding doors that offer a generous 700 mm opening on each side — an obvious advantage where ingress and egress are concerned. The team also made every effort to create sliding doors that are easy to open from the outside, even for younger children.

The seating position within the Mazda MX-Flexa has been carefully considered to maximize passenger comfort, without compromising storage space. Legroom for everyone is a priority in the MX-Flexa, and even third-row passengers enjoy sufficient room. To meet another key target for the vehicle's packaging team, second and third row seats are not only comfortable, they fold quickly and easily, thereby adding to overall cabin flexibility. There's no need to remove any of the seats and store them elsewhere.

The second row of seats features Mazda's lift-and-fold approach, with the lower cushion being lifted forward and the seatback being folded down, resulting in a nearly flat cargo floor when the seats have been stored, even without removing the headrests. The two seats in the third row feature the one-touch KARAKURI function, a popular feature introduced in the Mazda6, whereby the rear-most seats can be folded by simply pulling a lever at the third-row seat back.

Additional features in the Mazda MX-Flexa include a large centre console with a detachable cool/warm box. This box fits into a console between the front seats and works as an in-vehicle refrigerator. It can also be removed and carried as a portable cooler.

To support the driving dynamics targets, the development team further refined a suspension and steering system based on the architecture of the Mazda3. With McPherson-type struts in the front and a multi-link suspension in the rear, and anti-roll bars  both front and rear, the Mazda MX-Flexa is a neutral handling

The Importance of Emotional Appeal

As the Mazda MX-Flexa concept demonstrates, Mazda believes the key to further growth and success in this segment is to combine strong emotional appeal through styling and driving dynamics,with the practicality that customers rightfully expect from a space wagon. The competitor that best balances both qualities — emotional and rational appeal — will win. With the Mazda MX-Flexa, Mazda demonstrates the intensity of emotional appeal that will draw customers to a future Mazda space wagon.