The Ferrari P4/5 by Pininfarina will debut at the Pebble Beach Concours d'Elégance. The car is a one-off commissioned by James Glickenhaus, the American collector with a yen for the legendary racing cars of the Sixties.

"This project – comments Andrea Pininfarina, Pininfarina S.p.A. Chairman and CEO - represents an exciting challenge, i.e. trying to meet the Customer's requests in the best way possible without deteriorating the company's approach based on stylishness and innovation".

The car has been designed, engineered and built entirely by Pininfarina, bringing to life something that, just a few months earlier, was just a dream and creating a sort of symbiosis between the customer and Pininfarina along the path leading to definition of this astonishing model. Starting from a Ferrari Enzo, the aim was to produce a sole vehicle inspired by sport racing cars with extreme vocations: not just a show-car but a vehicle to be enjoyed on the road.

After freezing styling with various touch-ups to the initial sketches, the surfaces were defined using CAS modeling, then moving on to actual construction and assembly. More than 200 components were specifically developed through constant interaction between styling and design: from the bi¬xenon lighting clusters specifically designed with an innovative system of yellow and white leds to the alloy wheels – 20-inch aluminum – milled from the block up to and including the aluminum and special steel in-sight hinges. 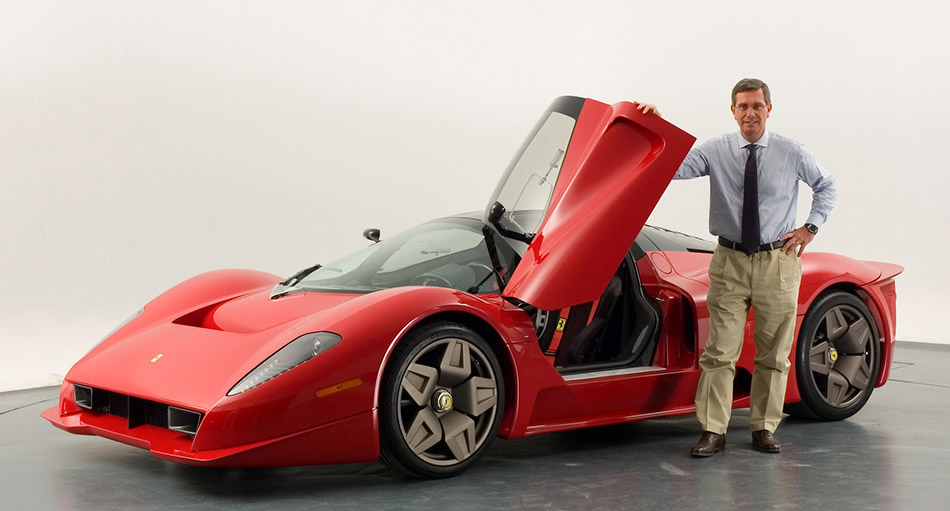 The sleek lines of the vehicle, characterized by a soft muscular touch, took shape on the body – made entirely of carbon fiber. The tapered profile of the nose highlights both its aerodynamic function and the car's new look; the central body is dominated by the single-shell windscreen, while the car is accessed via two butterfly type doors. The rear features powerful sides with the embedded teardrop type transparent rear window which also acts as engine cover and from which ceramic-coated exhaust tips peep out, as on racing cars of the Sixties. "The entire vehicle – stresses Ken Okuyama, Director of Pininfarina Styling – expresses elegance and fluidity with the clear-cut, uncluttered lines that are typical of Pininfarina's style.

Considerable attention has been dedicated to aerodynamics with continuous testing at the Pininfarina Aerodynamic and Aero-acoustic Research Center of Grugliasco (Turin, Italy) in an effort to reach the highest levels of performance combined with perfect functionality of all the appendices integrated in the body of the vehicle.

It is important to stress how re-styling was not restricted only to the outside of the car but continued also when defining the interior, completely redesigned according to the customer's indications.

"Pininfarina has been a strong stakeholder on the automotive scene for many years, as confirmed by the five new productions launched between the end of 2005 and 2006: Alfa Romeo Spider, Mitsubishi Colt CZC and Ford Focus CC for which we also followed up design and development, and Alfa Romeo Brera and Volvo C70 which we also engineered. The Ferrari P4/5 by Pininfarina and the Ferrari 612 Scaglietti "K" by Pininfarina – built for Mr. Kalikow and presented in April at Villa d'Este Concours d'Elegance - give us a chance to demonstrate our excellent creativity, making our know-how available to special customers in order to provide a real personal experience that goes well beyond simply the possibility of designing their own car" concludes Andrea Pininfarina.