New Renault Mégane GT and GT Line, unveiled at the Geneva Motorshow in March, are available across of the body types that make up the Mégane family (Hatchback, Coupé, Estate, Coupé-Cabriolet) and go on sale in June. These new versions bring distinctive styling and genuine driving emotions within reach of as many motorists as possible and also bridge the gap between mainstream Mégane and the allout performance credentials of Mégane R.S. 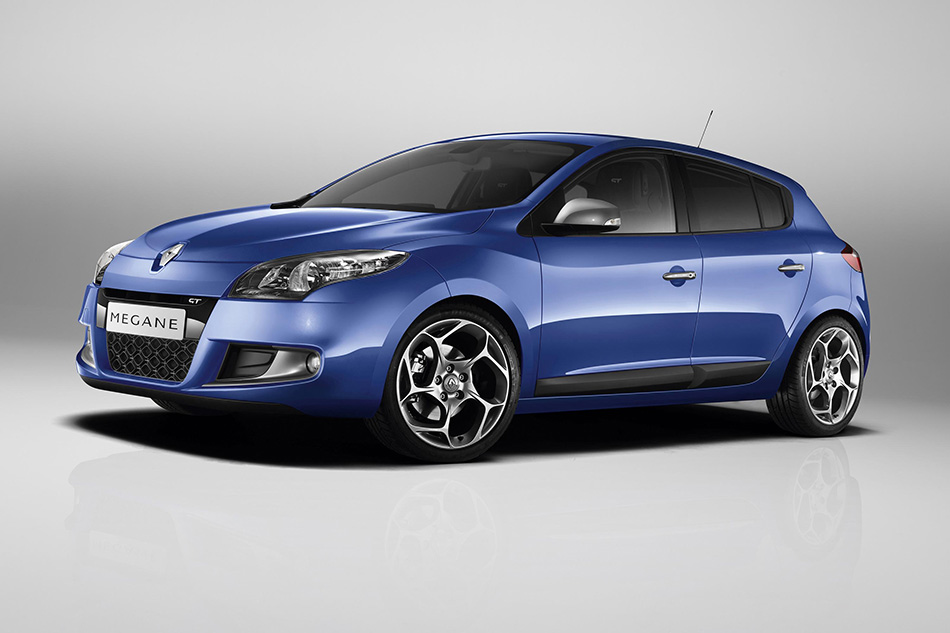 GT versions of Twingo, Clio and Laguna have been available for some time and have met with considerable success, with annual sales amounting to more than 10,000 cars. Meanwhile, the success enjoyed by New Mégane R.S. – which has already achieved number one status in France, and which holds third place in Germany and Spain – points to a healthy market for Mégane's sporting versions. Building on the reputation and success of its existing performance models, Renault now provides a sporting option for all the body types that make up the Mégane family.

New Renault Mégane GT and GT Line stand out by their sporty styling cues both inside and out. Their sporty character is further accentuated by the Malta Blue body colour (which is exclusive to these versions) and by the Dark Metal (anthracite grey) or polished carbon finish of certain details.

Front: the specific GT/GT Line bumper features a reshaped central air intake incorporating a gloss black centre section that supports the registration plate. The foglamps are housed in profiled, Dark Metal-coloured recesses on either side of the bumper. Black headlamp backgrounds round off the uniquely striking personality of New Renault Mégane GT and GT Line.

The windscreen frame and cabin surround of New Renault Mégane Coupé-Cabriolet GT and GT Line are picked out in Dark Metal (instead of satin-finish chrome). 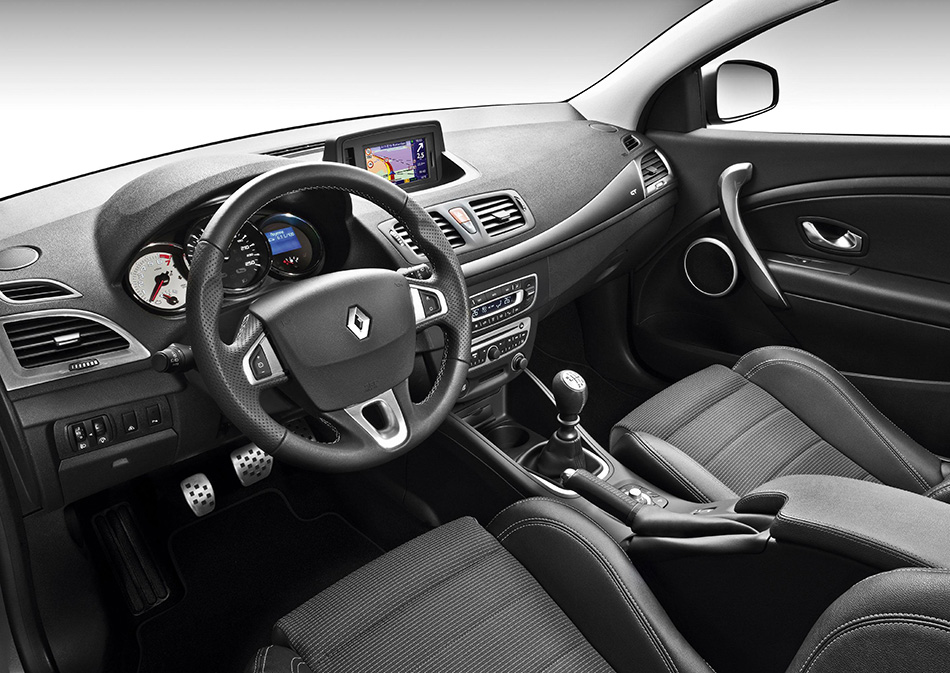 The engines available for New Renault Mégane GT and GT Line have been selected to meet customer demand and match the performance characteristics of each version. New Mégane GT Line are available with the same engines as the mainstream Mégane range and deliver a combination of driving comfort and impressive fuel consumption. GT versions are powered by the Mégane range's more potent, more exclusive powerplants for even greater performance.

The New Mégane GT Line range will appeal to customers who are looking for affordable, fuelefficient performance thanks to a choice of core-range petrol and diesel engines, the majority of which are Euro5-compatible and qualify for Renault eco²-criteria.

The more exclusive GT versions are available with either of the Mégane range's two most powerful turbocharged engines: the petrol

TCe 180 or the diesel dCi 160. The TCe 180 Euro5 (132kW) is a new evolution of the turbocharged 2.0-litre petrol engine and delivers outstanding driving enjoyment. With peak torque of 300Nm at 2,250rpm, it is extremely responsive and provides exceptional pick-up from low revs thanks to its twin-scroll turbo and continuously variable camshaft angle at the intake port which optimizes airflow into the combustion chambers and enables the turbine to spin up to speed more quickly. The turbo responds to the slightest touch of the accelerator from as low as 1,200rpm. This engine drives through a six-speed manual gearbox.

The dCi 160 Euro5 (118kW) is derived from the Alliance's 2.0-litre diesel turbo engine and is acclaimed as one of the most efficient of its class. With peak torque of 380Nm available from as low as 2,000rpm, this engine climbs smoothly and swiftly up the revs to 5,000rpm. Its 1,600-bar fuel injection rail, piezoelectric injectors, the advanced form of its pistons and its variable geometry turbo all contribute to making this four-cylinder diesel engine one of the most efficient in its class. The two balancer shafts efficiently filter out vibrations and contribute to an exceptionally quiet ride for even greater driving pleasure and comfort. The dCi 160 Euro5 engine is mated to a six-speed manual gearbox.

New Renault Mégane GT and GT Line were designed to deliver everyday driving enjoyment for the GT Line pack and sporty driving thrills inspired from New Mégane R.S. in the case of the GT versions.

The suspension of Mégane GT Line and Mégane GT shares its DNA with the rest of the Mégane family:

In order to lower their centre of gravity and produce a more dynamic handling package compared with core-range Mégane, the GT Line versions of New Mégane Hatchback and New Mégane Estate come with the 'Sport' chassis that was developed for New Mégane Coupé.

The thinking behind the GT Line version of New Renault Mégane Coupé-Cabriolet is slightly different inasmuch as it comes with the same chassis and seats as the standard version for a more comfortable ride with regard to vertical suspension performance.

Renault Sport Technologies' engineers have fine-tuned the suspension of the GT versions of New Mégane to deliver a genuinely sporty ride that is perfectly suited to everyday motoring. The technical solutions they have adopted have been chosen to ensure a perfect balance between driving enjoyment and comfort.

The GT versions feature the same 'Sport' chassis as used by New Mégane Coupé, but adjusted to suit the specific features of the different body types to ensure a quality ride and feedback from the road of the highest order.

For optimum grip and efficient transmission of power and torque to the ground, the GT versions of New Mégane come with the same high-performance Dunlop Sport Maxx TT 225/40 ZR18 tyres seen on Mégane R.S.

The GT versions of New Mégane are equipped with the same new electric power steering as the rest of the Mégane line-up and consequently benefit from the same improvements in steering feel. However, the calibration differs to that of the mainstream Méganes, however, to take into account the GT versions' specific tyres and chassis settings and provide a more responsive, firmer and sportier feel.

The brakes of the GT versions of New Mégane have also been adapted to its higher performance with:

THE MARKET AND RENAULT'S LINE-UP OF SPORTING CARS

The introduction of Mégane GT Line and Mégane GT alongside its R.S.-badged cars (Twingo R.S., Clio R.S. and Mégane R.S.) and GT versions of Twingo, Clio and Laguna sees Renault expand its line-up in the increasingly popular and clearly-defined sporting car market which incorporates both 'high performance' and 'performance' cars.

The European hot hatch market grew threefold between 2001 and 2009 to reach sales of almost 30,000 units, and Renault Sport's cars have emerged as benchmarks in their respective classes.

Renault's sporting cars benefit from the combination of Renault Sport Technologies' expertise, which is founded on experience acquired in the world of motor sport, and the production skill of the Renault Group.