At the North American International Auto Show in Detroit, USA, Volkswagen has an impressive study vehicle on display: the Advanced Activity Concept (AAC). It combines the functions of a pick-up with the luxury of a top-class sedan. With four-wheel drive, and powered by a 230 kW (313 hp) V10 TDI diesel engine, this is an initial clue to the changes that could take place in this vehicle class within a very short time.

The AAC's front-end styling echoes the Concept D car that was shown last year ? a large luxury sedan design study from Volkswagen. On the AAC's extra-long wheelbase, the design team has created a body that is as dynamic as it is elegant, and resembles no existing vehicle in this market segment. The A-posts are steeply raked, the side windows form a single visual unit and the C-posts which slope down at an angle to the load platform are all significant styling elements that combine to suggest something of a coupe body style. The load-area cover, with its end panel that echoes the slope of the C-posts, adds emphasis to the sporting side of the AAC's character. 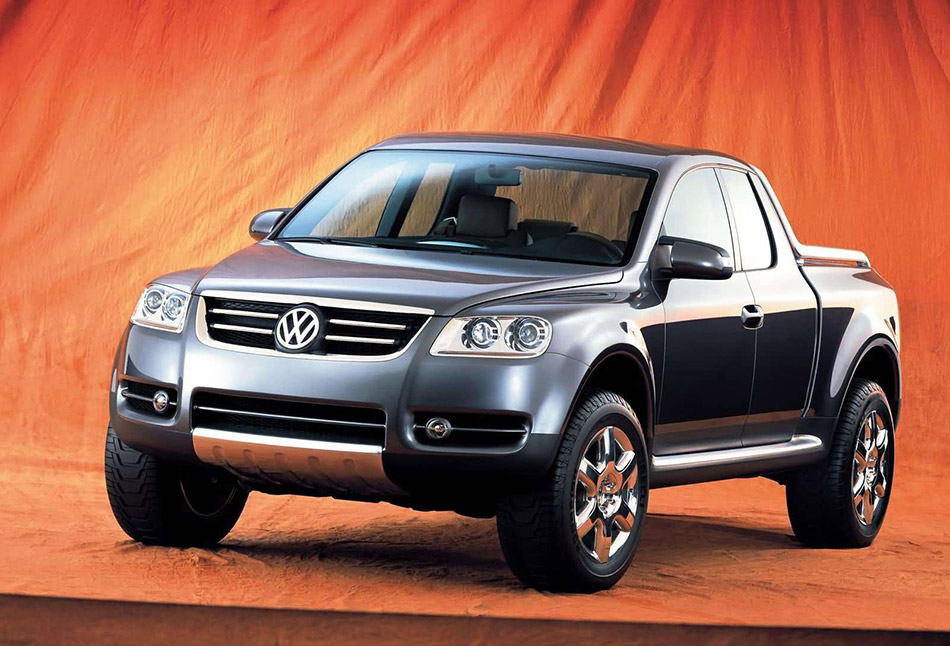 As far back as the C-posts, a load-bearing bodyshell is used.

The load platform and rear axle are supported on flanged-on side chassis members. As a smooth link between the passenger and load areas, a substantial rail runs all around the pick-up's platform.

In a style similar to the front, an aluminum underride guard is installed at the rear to provide off-road protection. Above it is the tailgate, giving access to the load platform, which has strong aluminium floor strips. A boldly styled lattice grid can be attached above the load-carrying space if needed.

The AAC's doors are unlocked by a remote control known as the "Communicator". Not until this is inserted in a special holder on the top of the dashboard can the engine be started by pressing a separate button.

Black Alcantara material enhances the appearance of the upper door trim panels and dashboard. The same material is used for the headliner. Below the windows there are aluminum strips in the door trims that are repeated at the appropriate height on the dashboard. All the elements below these strips are trimmed in high-quality leather, color "Teak".

Aluminum also dominates the center console in the area reserved for the lever gate of the six-speed automatic transmission. The controls for the three-position air suspension and the four-wheel-drive functions are also located here. A cold-store box has been integrated into the lower part of the center console. Above the switch panel is a navigation system with a 7-inch color screen that comes to life when the ignition is switched on. There is a multifunctional navigation guidance display which also shows which of the AAC's off-road settings are in use.

Since the special rear side doors mean that the body has no B-posts, Volkswagen has given the AAC front seats with the seat belt mounts integrated into the upper part of the seat back. Despite the absence of B-posts, the body's passive safety is unaffected: by way of the door locks, the roof and floor pan are pinned rigidly together.

The AAC design study is powered by a V10 direct-injection diesel with twin turbochargers and a balancer shaft. This high-tech unit develops 230 kW (313 hp) at 4000 rpm. One of its most remarkable features is the exceptionally high peak torque of 750 Newton-meters. Fuel injection is by a pump-injector system developed jointly by Volkswagen and Bosch.

A six-speed automatic transmission with Tiptronic manual shift mode transmits engine power to a permanent four-wheel drive system. When crossing difficult off-road terrain, an extra-low off-road ratio and two differential locks can be selected electronically by pressing the appropriate buttons, so that the AAC maintains its reliable progress in such conditions. These systems are accompanied by an electronic differential lock (EDS) at all four driven wheels. The electronic stability program (ESP) also helps to counteract difficult driving situations. The AAC concept car has independent suspension with double wishbones at all four wheels.

Air suspension with three position settings provides optimum ride conditions both on and off the road. It remains at the center height setting during the standard driving program, but can be lowered by a significant amount when driving at high speed. On rough terrain, on the other hand, the suspension can be fully raised; ground clearance is then 390 millimeters (15.4 in). The difference between the lowest and highest air suspension positions is 110 millimeters (4.33 in). This study vehicle possesses luxury features which have so far only been seen on conventional large luxury sedans.