The Alpine Berlinette turns 50 this year and, to mark the event, Renault has created the Renault Alpine A110-50 concept car, dedicated to performance and driving enjoyment.

So what's in a name? In some cases, the heritage of a name is like a national treasure - and that's certainly true for Alpine. Its DNA blends Renault's sporting passion and technical expertise.

The Renault Alpine A110-50 concept car translates the most characteristic design features of the original A110 in a modern and spectacular way.
The carbon-fibre bodywork features a new shade of blue which refreshes and reinterprets the famous original 'Alpine Blue'.
Produced with the renowned expertise of Renault Sport Technologies, the Renault Alpine A110-50 concept car is imbued with the world of motorsport. It benefits from the experience gained from the racing Mégane Trophy by using the same technical platform.
"Developing this concept car was a great adventure. It was a catalyst for creativity. We wanted to make a Berlinette that was of our time, and which boldly embodies Renault's passion for motorsport. We were guided by our hearts and emotions." - Axel Breun, Concept and Show Car Director. 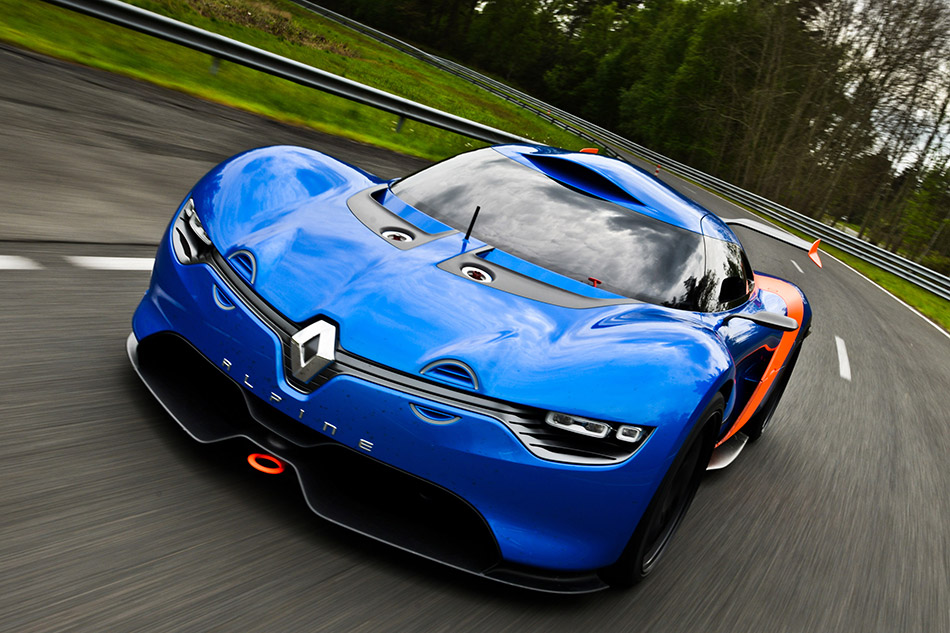 A new interpretation of a timeless design

To mark the 50th anniversary of the iconic Berlinette, Design Yann Jarsalle and Concept and Show Car Director Axel Breun reinterpreted the original design cues to include the new Renault design language introduced by Laurens van den Acker with the DeZir concept car, and which will soon be rolled out in the company's future models. The new front-end look, with the upright, confident diamond, has been adapted for this very low and wide car. The Renault Alpine A110-50 is a car of today; a bold embodiment of Renault's passion for motorsport.

"For everybody on the team, it was a dream come true to work on an Alpine concept car. We wanted to put this car firmly in the modern day, while resonating with its heritage" - Laurens van den Acker, Senior VP, Corporate Design.

The Renault Alpine A110-50 concept car translates the most characteristic design features of the original A110 in a modern and spectacular way with:

the sculpted forms of its elegant, flowing bodywork, enhanced by lights over which air seems to flow effortlessly.
the half-domed additional lamps, with a technical but nostalgic interpretation, thanks to full LED yellow lighting - as it should be!
a characteristic 3D rear window, which reveals the mid-rear engine.
air intakes on each side echo the ducts on the rear wheel arches of the Berlinette. The right-hand opening is for gearbox cooling, the left is for the engine bay.
Produced by Faster, the carbon-fibre bodywork features a new shade of blue which refreshes and reinterprets the famous original 'Alpine Blue'. Every opening panel does so with dynamics worthy of the finest GTs, with the bonnet hinged at the front and the engine bay cover opening towards the rear. The doors feature a scissor motion.

"The car is very curvy, like the Berlinette, while expressing the three key words of our new design policy: simple, sensual and friendly" - Axel Breun.

As you climb into the driving seat, the eye is drawn to the carbon-fibre sills. Everything inside this two-seater expresses build quality and sportiness, with black dominant.

the driver's seat features embroidered 'Renault Alpine A110-50' badging, Sabelt full harness belts and different, attractive shades of blue.
the dashboard is particularly uncluttered. The Renault Design-created steering wheel incorporates a colour screen and houses the same technology as a Formula Renault 3.5 single-seater to provide drivers with all the information they need.
Racing driver equipment is provided by Sabelt and the helmet is created by Ruby.
A true prototype 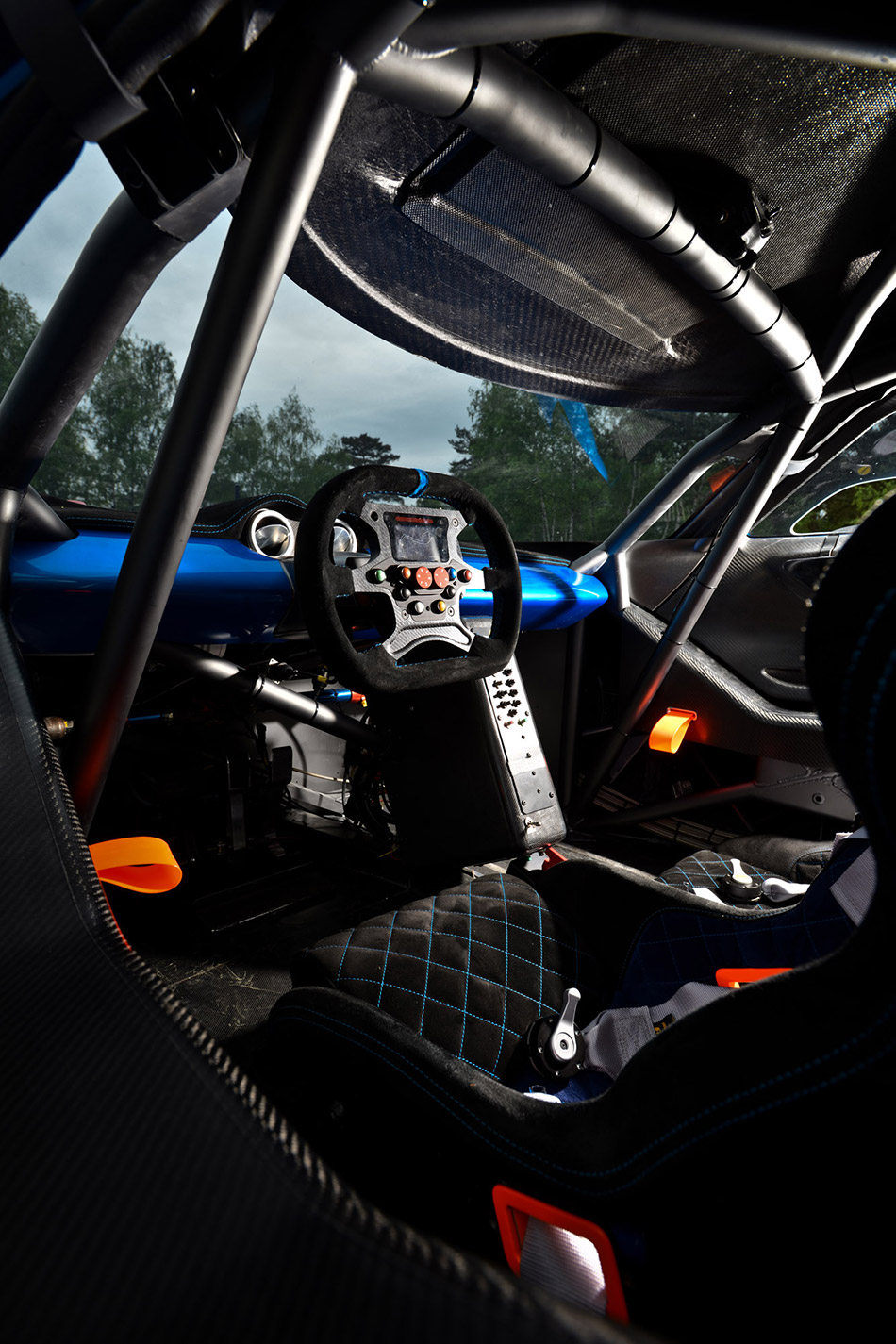 Produced with the renowned expertise of Renault Sport Technologies, the Renault Alpine A110-50 is imbued with the world of motorsport. It benefits from the experience gained from the racing Mégane Trophy by using the same technical platform. Acclaimed by drivers in the World Series by Renault, the tubular chassis of the Renault Alpine A110-50 has been stiffened and undergone several developments. The roll cage and bracing in the engine bay have been modified (lowered) in the workshop of Tork Engineering to adapt them to the vehicle's height, which is lower than that of Mégane Trophy. The digital design work was led by Renault Design, Koller and Etud Integral, while final assembly was carried out by Protostyle. The final weight distribution is almost ideal, with 47.8% over the front wheels.

To facilitate servicing, the concept car features integral pneumatic jacks. Derived directly from the systems seen in endurance racing, they allow the wheels to be changed extremely quickly.

An exceptional car that fuses elegance and aerodynamic efficiency

The efficiency of the Renault Alpine A110-50 concept car is largely generated by ground effect. At the front, a splitter hidden in the bumper generates low pressure, which results in significant aerodynamic downforce. At the rear, a diffuser accelerates air flow beneath the floor. Ground effect therefore accounts for more than one-third of the car's downforce, with the rest coming from an adjustable rear wing.

The research and design of this air flow was conducted using Computational Fluid Dynamics, a cutting-edge technology used particularly in F1. CFD involves studying movements of a fluid, or their effects, by resolving digitally the equations which govern the fluid. This technique was used by Renault Sport Technologies primarily in order to fine-tune the aerodynamics and study the behaviour of the New Mégane Trophy as a function of air flow.

The 21-inch wheels, with a single central nut, are specific to this car and fitted with roadhomologated Michelin tyres.

The Sachs dampers can be adjusted in compression and extension, and are mounted directly onto the lower wishbones. There are numerous different set-up options: castor, camber and alignment, ride height, anti-roll.

In order to improve driver feedback, driving aids like ABS, traction control, etc. are not fitted.

The braking capability of the Renault Alpine A110-50 match its performance. At the front, large 356mm-diameter steel discs are slowed by six-piston callipers. At the rear, the discs are 330mm in diameter, while the callipers are four-piston models.

The inlet manifold is fed by a new roof-mounted air intake. This development broadens the engine's power band, with additional horsepower at all engine speeds. The engine mapping has been optimised for these modifications.

The Renault Alpine A110-50 concept car is fitted with a semi-automatic six-speed sequential gearbox, as well as a twin-plate clutch that can be controlled using either the clutch pedal or a paddle on the steering wheel.

The gearbox is fitted longitudinally behind the engine and incorporates a limited-slip differential (discs and ramps) with adjustable pre-loading.

The cerametallic twin-plate clutch is also specific to the car. It is activated automatically when downshifting, guaranteeing fast and reliable gear changes.

A black box at the heart of Renault Alpine A110-50

"Developing this concept car was a great adventure. It was a catalyst for creativity. We wanted to make a Berlinette that was of our time, and which boldly embodies Renault's passion for motorsport. We were guided by our hearts and emotions." - Axel Breun.

Renault Alpine A110-50 - The legacy of the Berlinette

When Jean Rédélé unveiled the A110 Berlinette at the 1962 Paris Motor Show, it marked the start of an Alpine adventure for the engine from the Renault 8. The car had been developed from the Alpine A108, but was more stylish and more dynamic, with an even lower engine cover, a larger glazed area and the rear lights from the Renault 8. The new engine demanded changes to the air intakes: with the radiator mounted at the rear, cooling exits were opened in the resin bodywork behind the rear wheel arches, disguised with four chrome strips. The changes served only to heighten the elegance of the A110 Berlinette. The restrained, balanced silhouette maintained its extremely pure lines.

A car for the enthusiast

To drive a Berlinette is a life-changing experience. Above all, it was designed to win rallies, so it's not surprising that it boasts a certain pedigree; not a tricky personality, but real character. You don't climb aboard an Alpine, you slide into it. But once you're behind the wheel, the connection is immediate. Agility and traction are particular strong points thanks to the mid-rear position engine, which tends to produce oversteer that is easy to control using the steering and throttle. It's sometimes a little trickier to keep going in a straight line, but life's all about compromise... This isn't a car you simply take for a drive - it demands to be properly driven. Its weaknesses are also its strengths.

The light weight and handling qualities of the Berlinette meant it was perfectly suited for motorsport. As well as being fun to drive, the cars were favourites with the fans, who often saw them cornering hard at lurid angles. It's almost impossible to catalogue every motorsport triumph for the Berlinette, but these are the main stages of the adventure.

José Rosinski took the first win for the A110 at the 1963 Rallye des Lions. The remainder of the season followed this trend, with exploits including a win for Jacques Cheinisse on the Rallye d'Automne.

In the years that followed, a number of 'privateer' drivers achieved success at national and international level ahead of much more powerful cars from well-established brands.

Alpine became Alpine-Renault. New drivers joined the line-up: Gérard Larrousse, Jean-Claude Andruet and Jean-Pierre Nicolas in the works team, but also, among others, Bernard Darniche in the privateer ranks.

After victories on the Neige et Glace and Rallye de Lorraine for Gérard Larousse, Jean-Claude Andruet claimed the French title thanks to a total score of four wins during the season.

Jean Vinatier and Jean-Claude Andruet were the stars of the season, with the former going on to become the French Rally Champion at the end of the year.

The Berlinette 1600S was homologated for Group 4, which finally allowed the car to fight on almost equal terms with more powerful competitors. Jean-Claude Andruet, who had calmed his approach after several notable incidents, was crowned French and European Champion.

1971: The Berlinette dominates the Rallye Monte-Carlo

Another good year. Ove Andersson won the Rallye Monte-Carlo. Thérier finished second and Andruet third. Andersson also took the win in Italy against the flotilla of Fiats and Lancias dispatched to beat him. He subsequently triumphed on the Austrian Alpine Rally and on the Acropolis, securing the international title for Alpine. Jean-Pierre Nicolas won the French Championship.

The 1,600cc engine was replaced by a more powerful 1,800cc unit. Jean-Claude Andruet dominated the Tour de Corse. Numerous wins followed, shared between the team's drivers. Darniche was crowned French Champion at the end of the year, while Jean-Luc Thérier claimed the Rallye des Cévennes driving a turbocharged 1,600cc version. This was the first stirrings of a technology destined for major success...

Just imagine the best French drivers of the era: Andruet, Darniche, Thérier, Nicolas and Piot ably supported by the experienced Andersson. What's more, a team of mechanics giving their heart and soul, plus a car at the peak of its development. The season began with victory for Andruet on the Rallye Monte-Carlo, followed home by four other Alpines. In Portugal, Thérier and Nicolas scored a one-two. On the Rallye du Maroc, Darniche was unbeatable. And the rest of the season followed the same trend. Alpine won the inaugural World Rally Championship title and Jean-Luc Thérier was crowned French Champion.

Nicolas won the Rallye du Maroc and finished second on the Tour de Corse. This was the Berlinette's swansong, and the year produced the last major win for the A110 on the Critérium des Cévennes, driven by Jacques Henry.