Thirty years after the movie thriller ‘The Spy Who Loved Me' hit the silver screen "sQuba" is the first car that can actually ‘fly' under water.

Zumikon - "Dive it again, James!" If the situation gets too hot for the secret agent he'll go underground - or under water. So demonstrated impressively by Roger Moore in ‘The Spy Who Loved Me" in 1977 when he dove below the waves in a sleek vehicle that moments before seemed to be an ordinary car. The only problem: The scene never really took place; it was an animation.

With the "sQuba," the world's first real submersible car, the movie fake now becomes reality for visitors of the Geneva Motor Show (March 6th - 16th, 2008). Rinspeed boss Frank M. Rinderknecht (52) is known for his extraordinary automotive creations. The acknowledged James Bond enthusiast and Swiss automobile visionary kept revisiting this scene in his mind over and over: "For three decades I have tried to imagine how it might be possible to build a car that can fly under water. Now we have made this dream come true."

And it is this submerged stabile flight at a depth of 10 meters that sets the "sQuba" apart from military vehicles. While the latter can go under water, they are limited to driving slowly over the submerged ground. Rinderknecht: "It is undoubtedly not an easy task to make a car watertight and pressure resistant enough to be maneuverable under water. The real challenge however was to create a submersible car that moves like a fish in water." 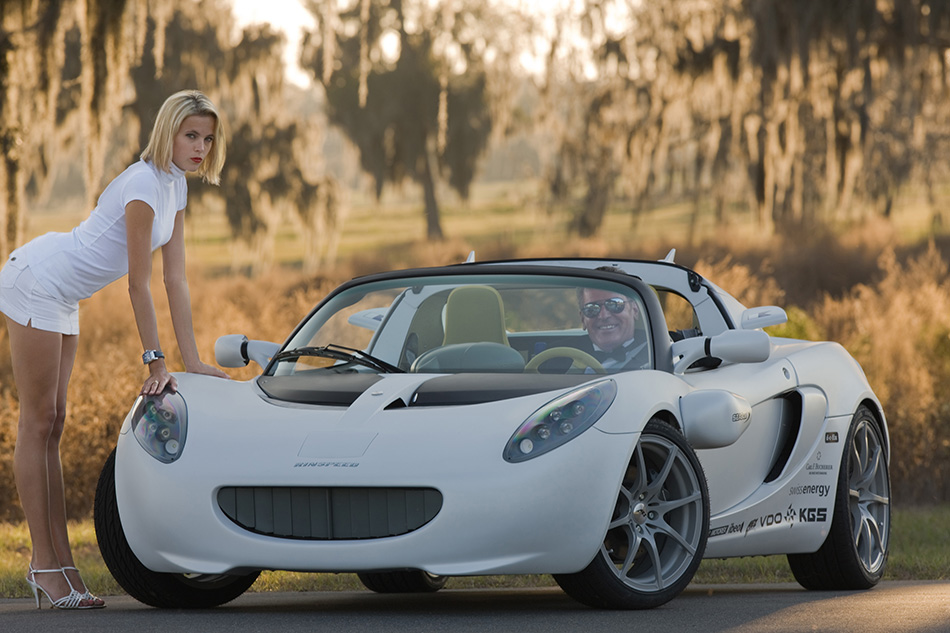 It also had to be a sports car that was converted into a diving dream in the facilities of Swiss engineering specialist Esoro. In a first step the combustion engine was removed and replaced by several electric motors. Three motors are located in the rear. One provides propulsion on land, the other two drive the screws for underwater motoring. They are supported by two powerful Seabob jet drives in the front, which ‘breathe' through special rotating louvers from HS Genion (for opening and closing the water intake). The rotating outlet jets were designed to be extremely light yet twist resistant by using high-tech nano materials, so-called Carbon Nano Tubes.

It is a sure bet that the "sQuba" will steal the show from any ‘Baywatch' beauty on the beach. And easily, too: You drive the car into the water and the car floats. That is, until you crack the door to let the water in. Immediately the "sQuba" starts on his way to the underwater world. The occupants' breathing air comes from an integrated tank of compressed air that divers know from scuba diving. Rinderknecht: "For safety reasons we have built the vehicle as an open car so that the occupants can get out quickly in an emergency. With an enclosed cabin opening the door might be impossible." But safety wasn't the only reason for choosing an open-top design: With an enclosed volume of just two cubic meters of air the vehicle weight would have to increase by two tons (!) to counteract the unwanted buoyancy, giving the "sQuba" the land mobility of a turtle. Without occupants the "sQuba" surfaces automatically.

It is even capable of autonomous driving on land thanks to a sophisticated laser sensor system from the Hamburg company Ibeo - without any help from the driver or passenger.

Power is supplied by rechargeable Lithium-Ion batteries. Rinderknecht: "The ‘sQuba' is a zero-emission car as documented by the rotating license plate in the rear. It produces no exhaust emissions. The Swiss are among the world's pioneers in the area of hydropower. The ‘sQuba's' filling station is the water reservoir." It is no surprise that the vehicle features powerful yet energy-saving LED lighting technology.

3-D foil elements with embossed fish and sharkskin patterns from Wetzel Processing Group and Hornschuch add visual pizzazz and streamline the exterior. Together with styling elements from Foliatec they create a harmonious velvety matt-white appearance.

For shore leave the "sQuba" relies on a stainless coil-over suspension from KW automotive and large Pirelli tires mounted on custom-made forged light-weight wheels from AEZ with 17- and 18-inch diameters. But the "sQuba" is really at home in the water. To make the occupants feel at home there as well the innovative salt-water resistant interior from Strähle + Hess features genuine mother-of-pearl trim and diamond-plated non-slip inlays from KGS Diamond, normally used in high-tech abrasives. After all, ‘diamonds are a girl's best friends.' The high-tech VDO instrument cluster and controls create a futuristic ambiance and allow controlling all vehicle functions even while submerged.

Frank M. Rinderknecht and his partners - amongst them also the fleet specialist LeasePlan - have created a truly unusual vehicle and in the process have thought of everything. Even the Motorex lubricants used in the ‘sQuba" are biodegradable. For the Rinspeed boss that is a meticulousness stemming from conviction: "The ‘sQuba' lets me be one with the elements and lets me immerse myself in a new and fascinating world - with Q factor. It is our duty to protect this world in which we are guests to the best of our ability." Isn't it, Miss Moneypenny? - James couldn't have said it better himself glancing at the sporty Swiss precision chronograph from C.F. Bucherer. Eau la la - shaken, not stirred.

Frank M. Rinderknecht used highly advanced technology and a Swiss-based network of top automotive specialists for his project. So the Rinspeed "sQuba" fits perfectly to Esoros motto: engineered by Esoro - What you dream is what you get.

For the ninth time the Swiss engineering company Esoro was hired to serve as general contractor for the entire project. Esoro was responsible for project management, implementation of new technologies, engineering, rendering, design and the manufacturing of the Rinspeed "sQuba".

Esoro realized the Rinspeed "sQuba" with the help of its highly competent suppliers. Starting with initial concepts, it took the highly skilled development team just six months to realize the entire project.

For 17 years now, Esoro has been a contract developer of concept vehicles, components and products, main focus is lightweight construction and mobility. During this time it has gained a well-deserved reputation for excellent efficiency and innovative solutions, which is demonstrated by numerous prototypes and serial products. Esoro develops fiber reinforced components from initial conception up to pre-production samples. In-house specialists optimize the component properties and characteristics throughout the entire development process. Important steps are non-linear, strong orthotropic Finite Element Analysis and crash simulation.

Furthermore another production process for niche markets, like high performance cars, trucks and caravans is now introduced by Esoro to several OEM's. The new and patented process called Melt Embossing offers the possibility to produce high end thermoplastic composite parts with low initial invest for structural and semi-structural applications. Since the company was founded, Esoro has been working intensively in the field of conception, implementation and tests of alternative and optimized vehicle concepts and drive systems. Esoro is thus one of the few companies in the world with well-founded experience in development and operation of electric, hybrid and fuel cell drives.