Smart is reaching for the stars. With the smart forstars concept vehicle the urban global brand is hitting the nerve of a target group that is at home in the cities of the world. The electrically driven smart forstars Concept is an SUC (Sports Utility Coupé) with room for two people and plenty of stowage space. Its name is a tongue-in-cheek reference to the glass roof above the passengers that gives a clear view of the starry sky. At the same time it hints at the witty idea of integrating a video projector in the front bonnet. This enables the work of film stars to be spontaneously shared with friends at any time.

The smart forstars Concept will be premiered at the 2012 Paris Motor Show (29 September - 14 October 2012). The show in the trendy French capital is a local affair for smart as the brand's production facility is located in Hambach, Lorraine. The colour of the expressive coupé is also a reference to the venue of the world premiere. It is painted in the extravagant colour "alubeam rouge" that creates an appealing contrast to the matt metallic titanium colour of the tridion safety cell. And thanks to the 60 kW magneto-electric motor from the new Brabus smart electric drive, the zero-emission smart forstars is agile and lively. 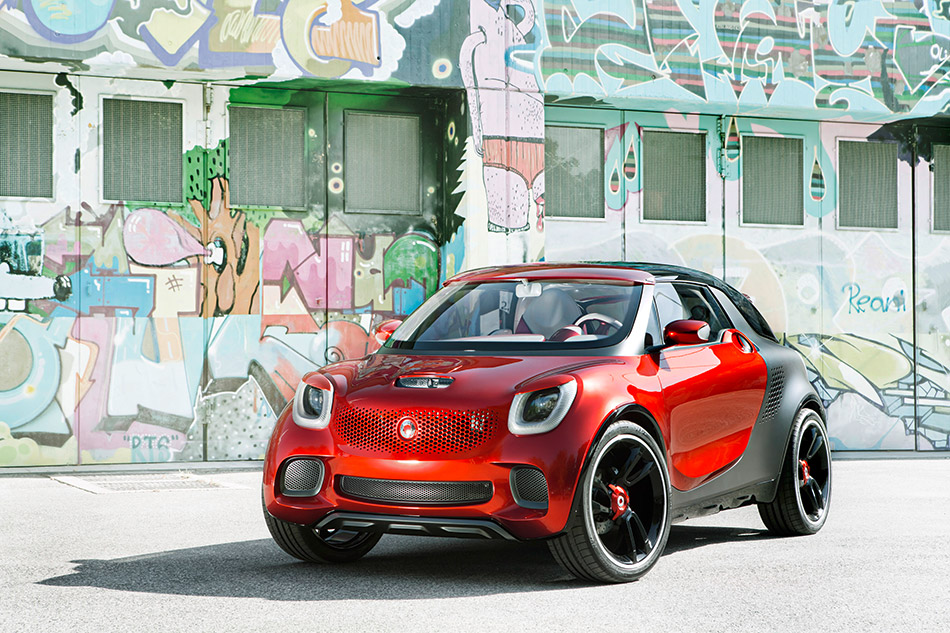 smart boss Dr Annette Winkler says: "The smart is Europe's most inexpensive series-produced electric car. Not only is it emission-free and fast, it is also possible to conveniently set the perfect interior temperature in advance with a smartphone, and it is simple to charge at a domestic socket. What's more, with its powerful battery and integrated projector the smart forstars can transform any grey backyard into an animated open-air cinema."

The compact smart forstars Concept (length/width/height: 3550/1710/1505 mm) is therefore not only a mobility concept with ample space for two people and a generous cargo area under the glass tailgate, it is also a communication concept that needs no more than a free house wall for a spontaneous cinematic experience. The media player of the projector integrated in the front bonnet is operated via Bluetooth® from an iPhone®. A high-quality sound system with additional loudspeakers in the ventilation openings behind the doors enables the drive-in cinema experience to be perfected for friends as well.

The exterior design: sassy and friendly with extremely short overhangs

The smart forstars is immediately recognisable as a member of the smart family, yet it also boasts striking new features - and not only its silhouette offers a look at smart's future design idiom. It greets the viewer with a saucy smile on its friendly yet assertive face.

The rhombic design of the front and rear lamps is very striking. Outer rings illuminate the indicators and daytime running lamps with a large number of LEDs. The lamps seem to push outwards like arrows - like drips on the cockpit window of an aeroplane as it takes off.

The "eyebrows" above the front headlamps are just one of many of the lovingly created new details. They give the headlamps a new U-shaped look. The transparent red sun visor above the windscreen takes up this idea and lends the coupé an even more squat road stance. The tail lights can even be opened. The charging socket for the high-voltage battery is found inside the right-hand tail light, whilst the left-hand one has space for a beverage can.

The study has a longer wheelbase than the current smart fortwo (2470 mm/plus 603 mm) and a wider track (front 1475 mm/plus 193 mm, rear 1475 mm/plus 90 mm) and these also emphasise the confident look. At the same time the extremely short overhangs at the front and rear make it exceedingly compact. All four wheels have been positioned at the outer corners of the body - a typically smart feature.

The smart forstars Concept shares the main features of its body with the smart for-us, which caused quite a stir at the 2012 Detroit Motor Show at the beginning of the year. The smart forstars, too, features convex and sensuously shaped body surfaces. The large brand emblem is proudly sported on the grille, and the front has a pronounced three-dimensional design. Where rally cars have an air scoop on the bonnet, on the smart forstars a video projector is integrated here as an ironic highlight.

There is a convex glass coupé roof above the passengers' heads. It joins seamlessly with the glass cover over the cargo area which opens upwards. Like the smart for-us, the lower tailboard at the rear can also be opened electrically. To start with, the tailgate slides down in a parallel position, then the cargo floor including tailboard retracts by 280 mm. The cargo on the 900 mm cargo area is then extremely easy to access.

Shiny black trims that continue below the side skirts draw attention to the wheel cutouts. The smart forstars Concept rolls on Michelin sports tyres measuring 245/35 ZR 21. The wing nut covers of the three-spoke wheels are an attractive detail.

The sporty, sassy character of the smart forstars is also emphasised by a striking and technically very complex red alubeam finish. "Alubeam rouge" has a wet look that provides an exciting and very modern contrast to the matt and distinctly metallic appearance of the titanium-coloured tridion cell.

The interior: stylish, uncomplicated and individual

Sleek, taut surfaces in mother-of-pearl white combined with precisely designed technical functional elements in brushed aluminium - the interior is characterised by contrasts. The colour "alubeam rouge" that is also used as an accent colour in the interior creates a link to the exterior. 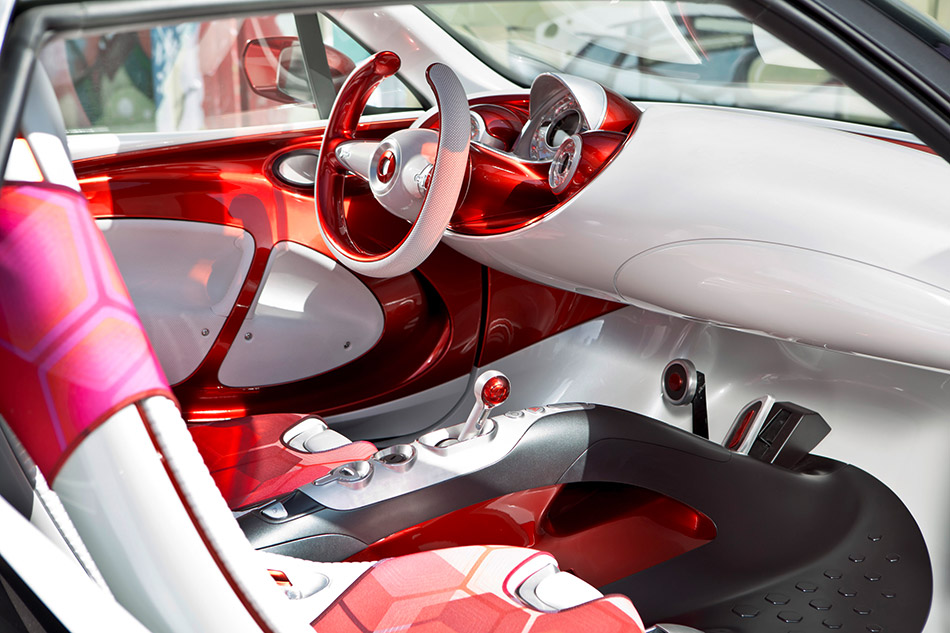 Stylish, uncomplicated, highly functional and easy to individualise - the two seats in the concept car are typically smart. The seat shells, which are open in the middle, are covered with a soft fabric throw giving them a hammock-like seating feel. The graphic elements and different red tones of the covers indicate a progression and thus underline the dynamism and the very trendy aspect of the vehicle.

As the covers can be removed in next to no time, simple individualisation with other throws is conceivable. Practical: when the seat cover on the passenger side is removed, long items can be loaded through the seat of the smart forstars Concept.

The seats are trimmed with high-quality white bag leather with exquisite white piping. Perforated leather in the door panelling forms a further sophisticated contrast and emphasises the high quality of the materials used.

Like the smart forvision and the smart for-us, the whole cockpit boasts aerodynamic styling for interior ventilation. The control and display elements are oriented to the driver. Just as the cockpit module divides the instrument panel, the two-spoke steering wheel is open at the top.

In place of a conventional rear-view mirror the smart forstars features a smartphone accommodated in a holder at the top of the windscreen. The driver can see what is happening on the road behind with the help of an integrated video camera. The smartphone also serves as a media source and controls the projector.

Stowage compartments to the left and right of the high-quality cargo area fitted with aluminium rails offer additional stowage space.