Whether he's on a street, in the dirt or at a formal course, BMX rider and Team Toyota athlete Drew Bezanson can turn any terrain into a fun run on his bike. The intensity could go up a notch when joined by the "Crusher Corolla," a creation dreamed up when Bezanson joined Toyota and Skullcandy to compete in the Toyota Dream Build Challenge.

Music and BMX come together throughout the customized 2014 Corolla to make Bezanson's next ride a party for everyone involved. Torrance, Calif. build shop Motorsports Technical Center infused BMX riding into the Corolla's design with custom grind rails added to the front and rear of the vehicle, rally wheels and a rack that mounts two bikes along the vehicle's back window. When the bikes are removed and the trunk opened, there are nesting locations for bike tools, plus a pair of mountable speakers with light bars. Suddenly, any location could be lit up and sound-ready for a BMX show.

Inside, custom iPad® integration controls the interior features, including music out of upgraded speakers shaped in the Skullcandy logo. Both front seat headrests are 3:1 scale representations of Skullcandy's newest Crusher headphones. "When designing the Corolla for SEMA, we imagined a BMX rider could drive next to any drainage ditch and transform the space into a performance with bikes, lights and music," Bezanson said. "Anyone who loves spontaneity in sports and deep bass sounds should vote for my entry in the Toyota Dream Build Challenge." 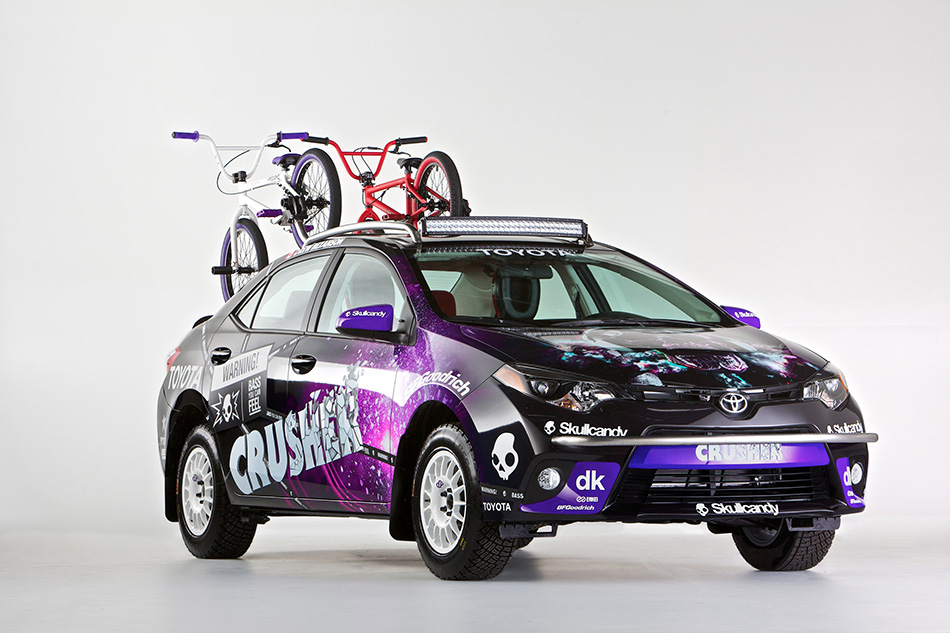 Bezanson is a Canadian native known for his creativity and talent both on the street and the course. He is a three-time Simple Session champion, along with his other wins at the Toronto BMX Jam and other competitions. Bezanson also helped design the course at the Toyota-sponsored Dew Tour City Championships in San Francisco earlier in October. This year's Toyota Dream Build Challenge invited five Team Toyota athletes and big-name partners to put the athlete's passion into a vehicle. Fans can vote once per day at www.ToyotaDreamBuild.com until Nov. 4.

The victor will be announced at the SEMA Show in Las Vegas on Nov. 5 at 10 a.m. local time by Top Gear host and racing personality Rutledge Wood. Fans can watch at www.livestream.com/Toyota. Bezanson's competition is NASCAR driver Parker Kligerman with partner Kyle Busch Motorsports, who transformed a 2013 Camry into a rally car; freestyle skier Simon Dumont with partner Oakley with the ultimate winter 4Runner; and Supercross stars Justin Brayton and Josh Grant with partner Joe Gibbs Racing Motocross with the Let's Go Moto Tundra.