Two top-notch motocross athletes and the Toyota Tundra came together to create one ultimate desert sports machine for the Toyota Dream Build Challenge.Joe Gibbs Racing Motocross (JGRMX) teammates Josh Grant and Justin Brayton combined their vehicle wish lists for a hot competition day, with help from the JGRMX and N-FAB shops more than 1,000 miles apart. The collaboration resulted in expandable electronic awnings and TV screens to cool down, along with all motocross gear and attitude to heat up the competition.

To accommodate the oversized needs, the team kept the front half of the 2014 Tundra with a CrewMax cabin and swapped in an 8-foot long truck bed from another Tundra. A custom-built metal box accommodates the length of a motocross bike, plus three TV screens on doors that swing open.

One TV plays off a game console so the riders have entertainment between competitions, another can play DVDs and a third displays bike engine diagnostics. A fridge, power washer, helmet dryer and space for tools, back-up gear and hydrogen tanks contribute to the functionality of the truck. Finally, the entire vehicle was lifted by nearly 12 inches to handle the rugged desert terrain where motocross events frequently occur. "The competition is not going to be able to hang with this truck and all the resources JGRMX and N-FAB brought to the table," Grant said. 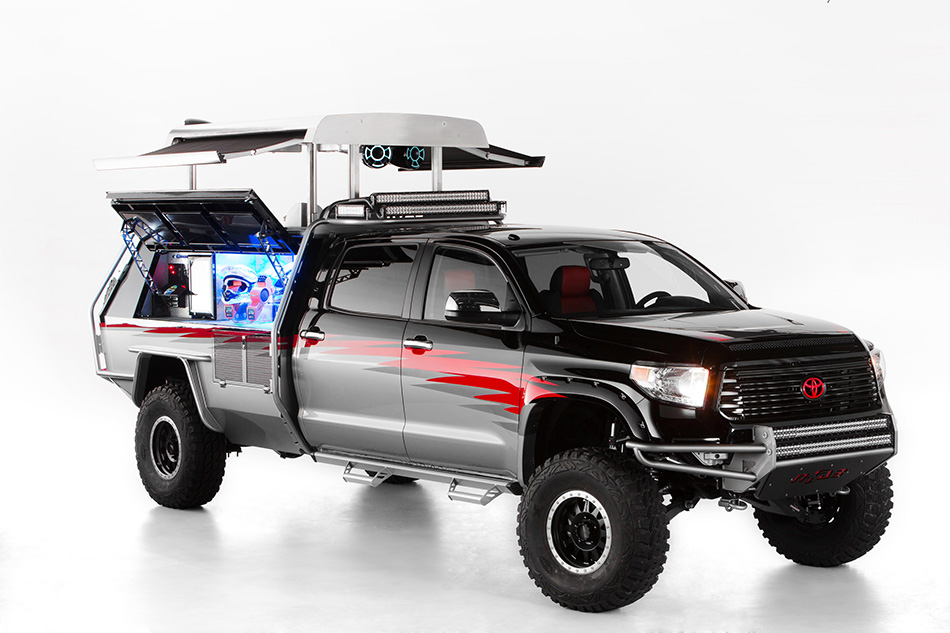 "Our industry has a lot of unique needs, and this Tundra hits them all." Grant has competed professionally since 2004 and is a frequent visitor to the podium, including a gold medal in Moto X at X Games 16, as well as wins in the Monster Energy AMA Supercross Championship and Lucas Oil AMA Pro Motocross Championship Series. Brayton turned pro at age 18, making a name for himself in the AMA Arenacross Series before earning a ride in Supercross and winning an X Games gold medal earlier this year.

The two Team Toyota athletes and their partners had seven weeks in this year's Toyota Dream Build Challenge to transform a vehicle. Voting for the winner begins today at www.ToyotaDreamBuild.com until Nov. 4. The winner will be revealed by Top Gear host and racing personality Rutledge Wood at the SEMA Show in Las Vegas on Nov. 5 at 10 a.m. local time. Fans can watch at www.livestream.com/Toyota.

"The skill, creativity and willingness of the teams to take on a wish list like ours was incredible to watch," Brayton said. "The Tundra will blow everyone away at SEMA, giving us the victory." To win, Grant and Brayton must beat out freestyle skier Simon Dumont with partner Oakley with the Ultimate Dream Ski 4Runner; BMX rider Drew Bezanson with partner Skullcandy and the 2014 Corolla tuned for performance and NASCAR driver Parker Kligerman with partner Kyle Busch Motorsports, who transformed a 2013 Camry into a rally car.