On sale throughout Europe in the summer of 2012, the Toyota GT 86 is an entirely driver-oriented vehicle. It gives form to the pure, intrinsic joy of driving through precise, instantaneous response to even the smallest throttle or steering inputs, for those who regard driving as a passion rather than a necessity.

With a low, highly aerodynamic bodyshell stretched tight over the engineering hard points, the new GT 86 is based on an entirely new platform. Shunning a heavy, large displacement powertrain for its performance, the GT 86 returns to Toyota's sporting roots with the world's only combination of a compact, front-mounted, free-revving, horizontally opposed 'boxer' petrol engine and rear-wheel drive. 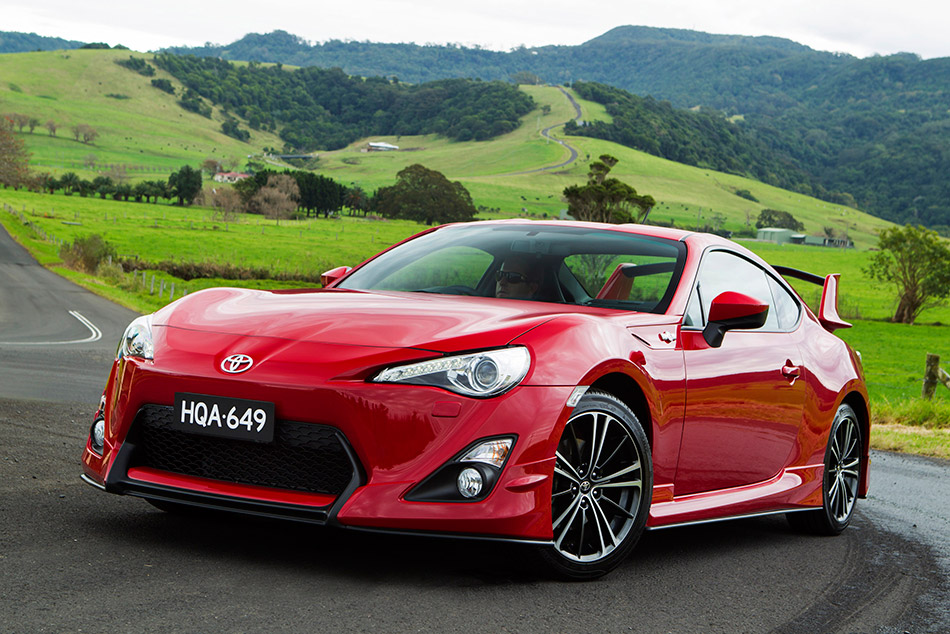 Conceived to focus specifically on the purity of the classic sports car experience, designed by a passionate team of engineers, honed through competition and fine-tuned to satisfy the most discerning enthusiast, The GT 86 inherits the spirit of former Toyota sports cars to reward drivers with pure driving involvement.

Though paying homage to both the exhilarating drivability of the Corolla Levin AE86 and its unique relationship with owners, enthusiasts and tuning shops, the number 86 has played a further, significant role throughout the development of Toyota's new sports car.

Packaged to Deliver the Ultimate in Sports Driving Enjoyment

Comprehensive weight saving measures result in a vehicle mass of around 1,200kg.

The flat-four format of the front-mounted boxer engine combines with the lowest driver hip-point of any Toyota production vehicle -just 400 mm- to give the GT 86 an ultra-low centre of gravity of only 460 mm.

Both the powertrain and driving position have been set as low and as far back as possible to optimise balance, giving the GT 86 near-perfect, 53:47 weight distribution. The ideal static weight distribution varies according to engine power; a 51:49 front bias suiting vehicles with approximately 150 hp, a similar chassis with 300 hp better suited to a 50:50 distribution.

Fine-tuning of the GT 86's suspension, brakes and steering maximises the benefits of its minimal mass, supercar-rivalling lack of inertia and ultra-low centre of gravity, allowing drivers to fully exploit the purity of the new Toyota sports car's outstandingly nimble handling, dynamic agility and cornering poise.

The front MacPherson strut and rear double wishbone suspension systems have been fine-tuned to react instantly to driver input. At 23 N/mm, the GT 86's front spring rates are, in fact, softer than the 25 N/mm settings of its Subaru counterpart. This softer front spring rate deliberately allows for slight body roll on initial turn-in, creating the perfect relationship between steering feel and vehicle behaviour exhibited by a classic front-engine/rear-drive platform.

Large, powerful ventilated disc brakes to both front and rear wheels offer a different brake pedal feel to that of any other Toyota. Brake response to pedal input has been tuned to provide precise modulation, assisting drivers in car control finesse by allowing for the smoothest possible dynamic weight transfer under braking.

Paying tribute to the legendary Black Racing wheels of the AE86, The GT 86's 17" alloy wheels feature a unique centre hub design. Toyota's traditional centre cap diameter is 60 mm, but this has been reduced to 49 mm, saving weight for no loss of rigidity, whilst making the spokes appear longer, and the wheels larger.

Toyota engineers determined that the dynamic potential of the Toyota GT 86 should not rely on high-performance tyres, and the new sports car is equipped with identical 17" tyres to those fitted to the Prius.

With very neutral, predictable properties, these tyres allow drivers to exploit the maximum potential of the chassis and suspension. Engineering the GT 86 to handle well on Prius tyres also ensures that customers who upgrade to high performance tyres will readily appreciate the net performance again.

The GT 86's 2.0 litre, naturally-aspirated petrol engine is the result of a joint development between Subaru and Toyota, bringing together their technical know-how and mutual passion for sports cars.

To Subaru's newly developed, horizontally opposed, 1,998cc, four-cylinder boxer engine, Toyota has added its D-4S technology. With separate twin injectors for both direct and port injection, and a high compression ratio of 12.5:1, D-4S increases power and torque over a wide range of engine speeds without sacrificing fuel efficiency and environmental performance.

Power is distributed to the rear wheels via a limited slip differential, optimising traction and grip under all driving conditions. And the GT 86's ABS and switchable VSC safety systems have been specifically tuned to combine dynamic stability at the limit of the vehicle's performance envelope with minimal electronic intrusion on the purity of the driving experience.

Designed under the 'Neo Functionalism' concept, the GT 86 combines the technical constraints of the most compact dimensions possible, a low centre of gravity and excellent, F1 technology-inspired aerodynamic performance with evocative, sweeping styling recalling the heritage of past Toyota sports cars.

The bold, simple yet iconic styling incorporates two key pillars of a new Toyota design language: Under Priority frontal design, which places the emphasis on an enlarged lower grille, focusing attention on the lower part of the car for a distinctive, more assertive appearance, and a Keen Look approach for clear, intelligent and expressive styling.

The new design language is enhanced by bold 'scorpion' styling to the lower grille, giving the Toyota GT 86 an even more aggressive, sporting appearance. Further sporting details include an exclusive, T-mesh grille design, purpose made 17" alloy wheels, a rear spoiler, twin rear exhausts with a connecting rod motif at the tip and the front wing-mounted '86' piston logo.

The '86' piston logo not only highlights the car's unique, front boxer engine rear-wheel drive powertrain format, but also represents the vehicle tyres sliding in a four-wheel drift, highlighting the perfect balance of the GT 86 at the limits of the performance envelope.

The GT 86 design uses a unique concept called 'Aero Sandwiching'. The car is pushed by air from the top, bottom and both sides -basically sandwiched by air from all directions- which stabilises it both vertically and horizontally. In this way the car is stabilised with no negative impact on the drag coeffiecient.

The dented contour on the 'pagoda' roof is an example of this system at work, and similar treatment has also been applied to the underbody. Additionally, stabilising canard fins known as 'sakana' (meaning 'fish' in Japanese), are attached throughout. The location of sakana both on the sides and the underbody of the GT 86 further contribute to lateral stability.

On board, the entirely driver-focused cockpit re-evaluates the essence of sports car driving through the detailed examination of the ergonomics and functionality of every element with which the driver interacts, allowing the GT 86 to be driven as if it were a natural extension of the driver's body.

The seat design has been painstakingly honed to ergonomic perfection through Nurburgring circuit testing, and under race conditions, to ensure it remains comfortable over long periods behind the wheel.

The seatbacks and cushion surfaces are designed to provide optimum support under acceleration G-forces from the front, back and sides. In addition, the shape of the front seat is designed not only for comfort, but also to prevent elbows from interfering with gearshift operation.

The steering wheel has a diameter of just 365 mm, the smallest yet fitted to a Toyota, and its buckskin finish has been developed through exhaustive feedback from test drivers to offer enhanced steering performance and maximum grip under all cockpit conditions.

Built around the large tachometer, the three meter instrument cluster has been designed with particular attention paid to display placement, markings and typeface, ensuring optimum, at-a-glance visibility and readability during sports driving. Within the tachometer, a red shift light illuminates at 6,300 rpm, helping drivers change gear at optimum engine revs.

Maximising the driver's all-round visibility has played a key role in the GT 86's interior design. The powerful, front and rear wheel arch flares have been designed to be visible both through the windscreen and rear view mirrors, helping the driver place the car accurately on the road. And a 'floating' centre high-mount stop lamp helps improve rear visibility. 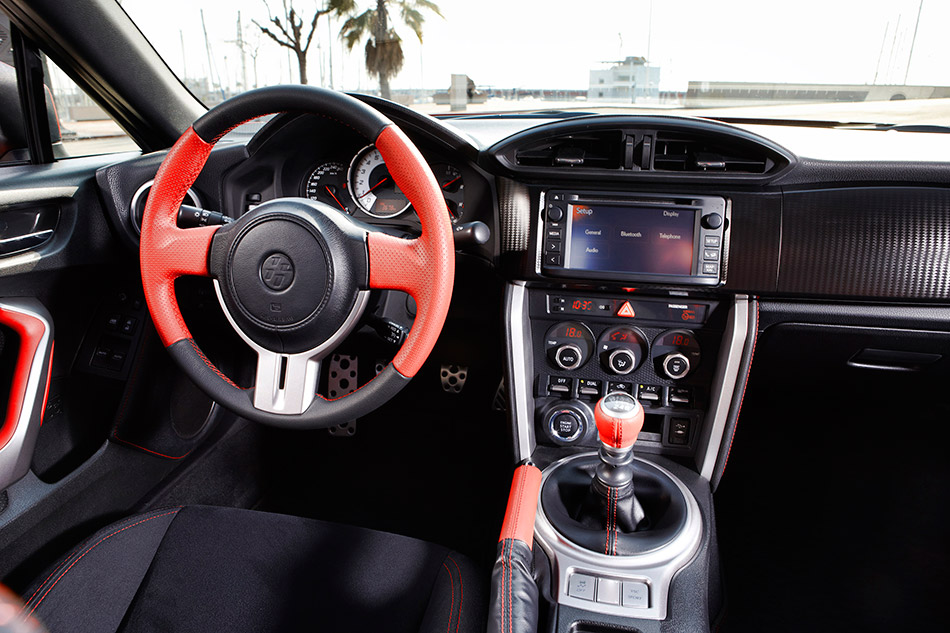 A Car Inspired by a 50 Year Heritage of Front-Engined, Rear-Wheel Drive Sports Cars

Toyota has a 50 year history of creating exciting, driver-focused, front-engined rear-wheel drive sports cars that have proved as popular with the public as they have been successful in competition.

The new GT 86 captures the best elements of three key models from that rich sporting heritage: the Toyota Sports 800, the Toyota 2000GT and the AE86.

Though the GT 86 launches as the world's only front-mounted horizontally opposed engine and rear-wheel drive package, it cannot claim to be the first. That honour goes to Toyota's two-cylinder boxer engined Sports 800, which the company began developing in 1962.

With its compact body and excellent fuel efficiency, the Sports 800 achieved great success in endurance races. The low centre of gravity of the boxer engine and front-engine, rear-drive powertrain format was considered ideal for a car providing maximum driving entertainment. For this reason, the GT 86 has adopted this classic layout for the first time since the Toyota Sports 800.

Even now, its styling appears sophisticated, cool and fresh. During the development of the GT 86, a 2000GT was put next to the clay model of new sports car being developed by the designers. Without receiving any specific instructions, the designers continued their work, occasionally looking at the 2000GT. As a result, their work infused the Toyota GT 86 with the spirit of the 2000GT without imitating it.

From the AE86, the GT 86 inherits not its hardware, but its spirit. The AE86 was not an extreme sports car. It was moderately priced, with a mass-produced engine and a compact, front engine, rear-wheel drive body.

A genuinely lightweight machine which offers the intimacy and involvement of a car that can be driven as if it were an extension of the driver's body, the Toyota GT 86 perfectly recaptures the exhilarating spirit of the last Corolla Levin AE86 and, with numerous customisable parts, shares its aim to be an affordable car that evolves with its owner.