In time for its 30th birthday, the new Polo appears optically more dynamic and fresher than ever before. The new front end with its V-shaped radiator grille, in particular, lends the Polo a significantly more striking look. Pre-sale will start on March 14; despite improved equipment, the vehicle's prices will remain at the same level.

The new Polo is coming! Based on its well-known virtues, the most recent generation of this all-round talent will remain the benchmark in its class. The Polo's appealing radiance has also remained, although its exterior appears more mature and even more modern. Pre-sale of the new Polo will start on March 14 in Germany. 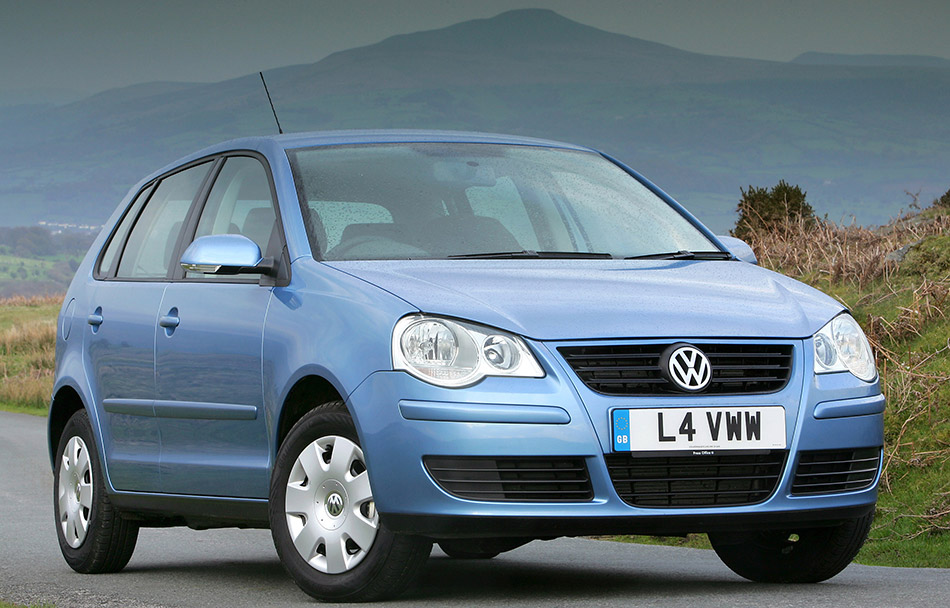 Despite its improved convenience and safety equipment, the vehicle's prices will remain at the same level. The Polo 1.2, which has an output of 40 kW / 55 hp, therefore costs €11,250; the basic TDI, which offers 51 kW / 70 hp, starts from €13,485 and therefore costs less than the predecessor's entry-level diesel version. Market launch in Germany and the most important European countries will take place at the end of April.

Following the new Passat, the new Polo will be the second Volkswagen to display the new brand face. The entirely redesigned front end bears the escutcheon grille and re-interprets the V topic. From the A-pillars, a striking curve stretches via the bonnet to the radiator grille.

However, the new Polo's face is essentially characterised by its headlights. These are defined as a trapezoidal element, enhanced by the eye-catching, circular element of the main headlights.

Thanks to this front end design, the Polo retains its appealing character, but its modern design style places it in a higher-quality class. In comparison with the predecessor, its redesigned front extends the new Polo by 19 millimetres to 3916 millimetres. Its width (1650 millimetres) and height (1465 millimetres) correspond to the currently available model.

The rear end lends the vehicle a further dynamic touch. Here, the rear window ends in a V shape in the lower frame area, making the Polo appear more lively and sporty when viewed from the rear. The redesigned rear lights also demonstrate character, picking up on the front end's circular elements and clearly setting the tone at the rear of the new Polo.

Regarded from the side, the Polo stands out thanks to a design which is both clear and convincing. Accentuation of the two available body versions is typical of the Polo: whilst the two-door's ascending lateral curve bears coupé-like features, the four-door reveals stature and solidity in its clear design and third side window in the C-pillar.

This most recent generation of the Polo will be available in three equipment levels: "Trendline", "Comfortline" and "Sportline". In addition to the good convenience and safety features familiar from these equipment levels, the new Polo is fitted with further, new details as standard. These include an anti-lock brake system with dual-rate brake assist, electric window lifters in the front, air conditioner (as of Comfortline) and central locking. Until recently, features such as Park Distance Control, Tyre Pressure Monitor and the dipped-beam's "Coming Home" function were exclusively available for luxury class models. The Polo will set the pace with these features, and combines a high-quality, modern design with innovative equipment which meets the requirements of progressive customers.

The new Polo has also been modernised inside. High-quality fabrics in an exclusive and fresh design lend a reviving touch. In addition to the redesigned instrument graphics, new steering wheels are also available.

The new Polo is fitted with front and side airbags on both front seats as standard. An optional head airbag system, in which the curtain airbags inflate to provide protective padding covering the entire side window area, is also available. The Electronic Stabilisation Programme (ESP), which is fitted as standard in engines as of 74 kW / 100 hp, and is optionally available for the other engines, additionally offers effective support for safe driving.

The new Polo demonstrates its first-class qualities as an all-round talent in the diversity of its engines. Five petrol engines with outputs ranging from 40 kW / 55 hp to 74 kW / 100 hp – including an FSI engine – and four state-of-the-art TDI engines with outputs from 51 kW / 70 hp to 96 kW / 130 hp are available.

Access to the Polo's diesel world is provided by a modern 1.4-litre three-cylinder TDI with 51 kW / 70 hp, which replaces the familiar 1.9 SDI. Another new engine, a three-cylinder 1.4-litre TDI with 59 kW / 80 hp, meets customers' wishes for higher output.