With the 2012 Paris Motor Show set to open, Citroën is continuing the DS line story with the reveal of a new chapter, the Citroën DS3 Cabrio. Motorists enjoy the slightest ray of sunlight thanks to the newcomer's intelligent architecture that makes convertible life considerably easier. The Citroën DS3 Cabrio is all about pleasure. Non-stop.

The DS3, launched in 2010, has proved an undeniable success, totalling nearly 180,000 registrations. Boasting enhanced personalisation possibilities with a range of roof collections and the Racing, Ultra Prestige and Just Mat models, the DS3 has played a major part in boosting DS line awareness and success. DS line sales have already topped the 250,000 mark. 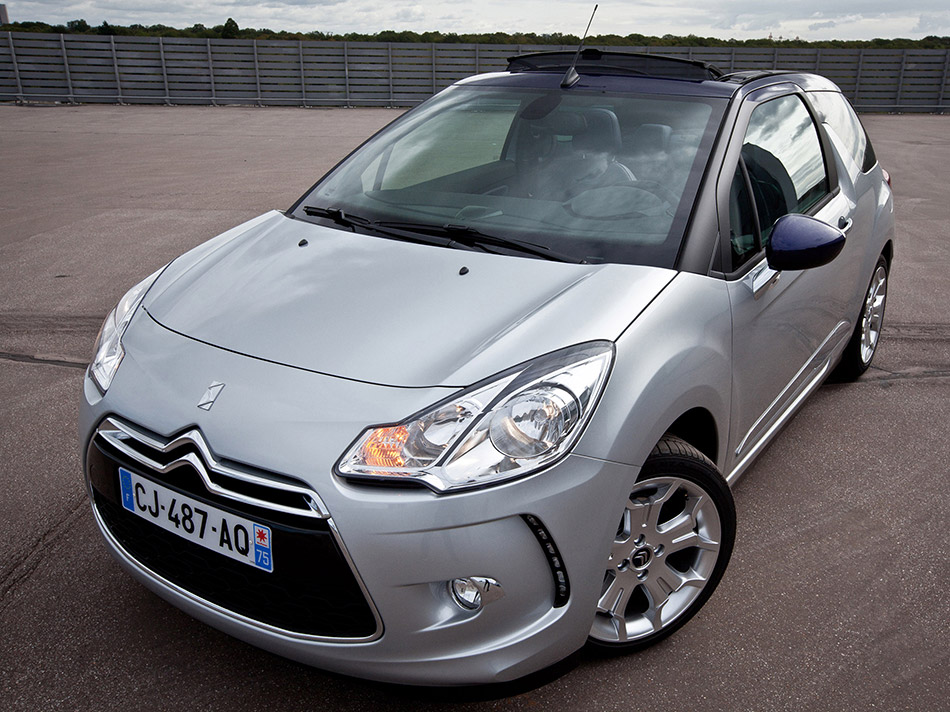 The Citroën DS3 Cabrio is above all a real DS3. It features all the strong points behind the success of its sister model, namely bold styling choices, refinement down to the last detail, and instant driving thrills.

Citroën has chosen a modern technical solution for the DS3 Cabrio to underscore the DS3's unique character and retain all of the original model's road feel. Contributing to the personalisation effort, three soft-top roofs are available: black, Infini blue and DS Monogramme. The Citroën DS3 Cabrio is also heir to all the sophistication of the DS line, with an innovative 3D rear light signature and a highly original tailgate opening motion.

The Citroën DS3 Cabrio blazes a trail in the cabriolet segment with a new wave of modernity:

electrically manoeuvrable roof up to 120 km/h
the only real 5-seater in the category
the largest boot in the category
The Citroën DS3 Cabrio, produced at the Poissy production site in France, will be launched in early 2013. A version emitting just 99 g/km of CO2 will be available from release.

Heir to the unique styling of the DS3

The Citroën DS3 Cabrio inherits the strong personality of the hatchback. At 3.95 m long, 1.71 m wide and 1.46 m high, it retains the original's compact proportions, denoting agility and energy. All the customary bold styling choices are present, from the "floating" two-tone roof and shark fin that reinvigorates the car's waist line, to the side recesses that underline the LED daytime running lights and sculpt the car's "face". The architecture of the Citroën DS3 Cabrio is fully in DS3 character. The canvas roof becomes a new source of personalisation with a range of original colours and designs that add to the car's unique personality. The new model also features all-new 3D LED lights at the rear and a chromefinished handle that elegantly highlights the top of the tailgate.

The Citroën DS3 Cabrio is available with three roof colours: black, Infini blue and DS Monogramme. Citroën has maintained the distinctive floating roof feature by colouring the rear side panels black and echoing the colour of the soft top on the upper part of the body sides, the front cross strip and the rear spoiler. The decors on the dashboard insert, air vent surrounds and gear stick handle are also colour-coded with the body paint and soft top. Six decors are available: grey, Brillant black, white, Carbotech, Infini blue and Moondust grey.

Refined down to the last detail

The highly sophisticated Infini blue canvas comprises delicate hues of blue and violet. The visual effect is obtained by a weave of three different coloured threads, one of which is shiny. Each thread reacts differently to changes in light to further emphasise the singular personality of the Citroën DS3 Cabrio.

Recalling products from luxury goods companies, the DS logo, synonymous with refinement and elegance, features on the Monogramme canvas roof of the Citroën DS3 Cabrio. The subtle design was achieved by contrasting two Jacquard grey tones with Moondust grey.

The atmosphere on board the Citroën DS3 Cabrio is just as distinctive as the body styling:

The Citroën DS3 Cabrio has a three-dimensional light signature based on all-new 3D LED tail-light technology. The design of the lights is inspired by those on the Revolte and Survolt concept cars. The central part of the light comprises a rectangular opaline set of 31 LEDs and an ensemble of semi-reflecting mirrors that reflect the light guide into infinity. The 3D unit lights up at night when the headlamps are turned on and in daylight when the driver brakes. A 15-LED blade on the upper part of the light emphasises the 3D unit and serves as a side and stopping light. In an elegant piece of detailing, the 3D light features a chrome-finished DS logo set in an embossed black DS setting.

The road feel of a real DS3

While most convertibles weigh in at some 100 kg more than the regular model, the Citroën DS3 Cabrio is just 25 kg heavier than the DS3 hatchback. The optimised architecture of the cabriolet model retains all of the agility and responsiveness of the original. Citroën engineers have managed to give the DS3 Cabrio the rigidity of the hatchback, notably by using the same architecture for the sides and adding structural reinforcements around the boot. Equipped with the same technical base as the regular DS3 - i.e. structural components and running gear - the Cabrio keeps all of the eager handling that makes the DS3 such a treat to drive while at the same time offering topnotch control and safety. The Citroën DS3 Cabrio brings the driver into "contact with the road" for amazing ease in corners and bends.

The Citroën DS3 Cabrio was designed to bring occupants pleasure with no compromises. It combines the advantages of a classic cabriolet with the strong points of a hatchback.

Top-down driving has never been this easy:

The roof takes just 16 seconds to fully close, at speeds of up to 120 km/h. Motorists open and close the roof with a button in the ceiling console offering three opening positions: intermediate, horizontal and total. Even in horizontal setting, the soft top folds back behind the rear passengers so they get a completely clear view.
Engineers worked particularly hard on acoustics. First, by choosing top-quality canvas, with standard-setting soundproofing, comparable to that of a hatchback when closed. But also by designing an aerodynamic deflector net for optimum acoustic comfort with the canvas roof open. This component springs into action as soon as the roof opens, deflecting air currents and preventing air buffeting.
The design is also less invasive in terms of cabin space. The Citroën DS3 Cabrio has five real seats and the largest boot in its category, at 245 litres. In a breakthrough in the segment, it has the same cabin space as its hatchback sister. And even retains the 60/40 split-folding rear bench, handy for a range of everyday needs. The tailgate has a particularly original opening path (circular motion), which enables motorists to fully open the boot no matter what the space behind (for example, when parked rear to wall).
Work on aerodynamics has resulted in an SCx of 0.69 m2, identical to that of the hatchback, which enhances performance but also helps to reduce CO2 emissions. More specifically, the impressive result was obtained by adding a long spoiler and aerodynamic deflectors on the quarter-light surrounds.