When Volkswagen introduced the Passat Alltrack, it closed the gap between the on-road and off-road worlds. Now Volkswagen is transferring this concept to another vehicle class with the new Golf Alltrack.

Europe's largest carmaker is celebrating the world premiere of this all-wheel drive model at the Mondial de l'Automobile in Paris next week (2 to 19 October). Technical and visual properties of the Golf Alltrack include a 4MOTION all-wheel drive system, higher ground clearance, wheel arch mouldings and flared side sills that offer body protection, newly designed bumpers and many other independent exterior and interior features.

Power units are a TSI petrol engine and three diesel engines, all powerful turbocharged direct injection units. The 1.8-litre TSI with 180 PS is an entirely new addition to the Golf range. Diesel units will comprise a 1.6-litre TDI with 110 PS, plus two 2.0-litre TDI engines with 150 and 184 PS. The versions with 180 PS and 184 PS transfer their power to the all-wheel drive system via a standard six-speed dual clutch gearbox (DSG).

4MOTION.The new Golf Alltrack was designed for good performance on both asphalt and light off-road terrain. The 4MOTION all-wheel drive system is the technical foundation here, equipped with the latest generation Haldex coupling, which activates even before slip occurs and prevents nearly all losses in traction thanks to a proactive control. Under relatively low engine load conditions, or when coasting, forward propulsion comes primarily from the front axle, while the rear axle is decoupled. This basic drive layout saves on fuel. If necessary, the rear axle can be variably engaged within fractions of a second. This is done by the Haldex-5 coupling, which is activated via an electro-hydraulic oil pump. A control unit continually adjusts the ideal drive torque for the rear axle and controls how much the multi-plate clutch should engage by activating the oil pump. If necessary, nearly 100 per cent of the drive torque can be directed to the rear axle. 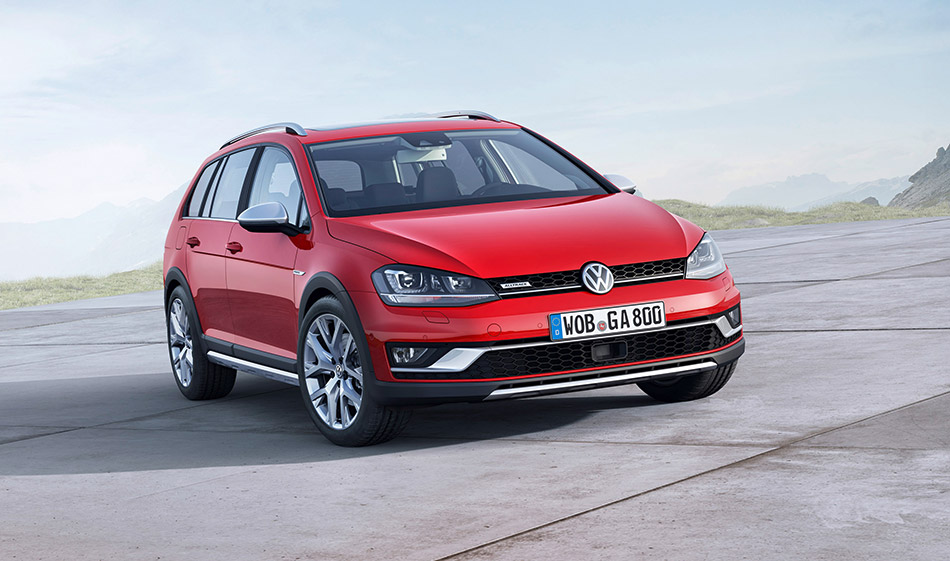 EDS and XDS. In addition to the Haldex coupling that acts as a longitudinal lock, the four-wheel EDS system – operating as an electronic differential lock that is integrated in the ESC electronic stability control system – assumes the role of a differential lock at both axles. The Golf Alltrack is also equipped with XDS at the front and rear axles. It optimises steering response by braking the wheels on the inside of a bend during fast driving. As soon as the electronics detect excessively reduced load at one of the wheels on the inside of a bend, the hydraulic unit of the ESC system applies brake pressure to this wheel to restore optimal traction.

The Golf Alltrack not only offers exceptionally good off-road properties and active safety benefits; it is also an ideal towing vehicle, designed to handle trailer loads of up to 2,000 kg (braked on 12 % incline).

One TSI, three TDI engines. As mentioned, the new Golf Alltrack will launch with four four-cylinder engines; they all fulfil the EU-6 emissions standard. The power range of the engines 110 PS to 184 PS.

1.8 TSI with 180 PS. For the first time in the Golf, Volkswagen is offering a 1.8-litre TSI with 180 PS (from 4,500 rpm). The direct-injection four-cylinder turbocharged engine is ideally suited for use in the Golf Alltrack, because it develops an impressive maximum torque of 280 Nm from a low 1,350 rpm, and maintains this constant value up to 4,500 rpm. The Golf Alltrack 1.8 TSI is equipped with a 6-speed dual clutch gearbox (DSG) as standard. The versatile vehicle has a top speed of 135 mph and accelerates to 62 mph in 7.8 seconds. This agility contrasts with an economical fuel consumption figure of 41.5 mpg (equates to 158 g/km CO2).

High-tech diesels. All three turbodiesel (TDI) engines of the Golf Alltrack come from the EA288 engine series. These common rail four-cylinder engines, which were introduced in the latest seventh generation Golf, are among the most efficient in the world. Despite their different engine displacements and power levels, they share several key technology modules, including emissions-relevant components such as the fuel injection system, turbocharger and intercooler within the induction module. A sophisticated exhaust gas recirculation system is also used. Also included: oxidation catalytic converter, diesel particulate filter and NOx storage catalytic converter.

2.0 TDI with 184 PS. This Golf Alltrack 2.0 TDI sets a record with an output of 184 PS (at 3,500 to 4,000 rpm), becoming the most powerful Golf ever in an Estate body. The two-litre turbocharged engine delivers its maximum torque of 380 Nm to the 6-speed DSG – which comes as standard on this car – from a low 1,750 rpm. It maintains this constant value up to 3,250 rpm. The car's power and torque figures, along with its all-wheel drive system not only perfect its off-road properties but also enable trailer loads of up to 2,000 kg (braked on 12 % incline). The engine, which was adapted from that in the Golf GTD, also delivers extremely sporty driving performance: 7.8 seconds for the sprint to 62 mph and 136 mph top speed are proof of this. The Golf Alltrack 2.0 TDI consumes just 55.4 mpg (134 g/km CO2).

Exterior – side profile. The Golf Alltrack, which has up to 20 mm additional ground clearance, essentially has the same car body as theGolf Estate. However, much of the exterior of the new model was customised, resulting in a very charismatic vehicle. From the side, the black wheel arch mouldings of the Golf Alltrack are visually prominent; this rugged protection is continued in mouldings that run above the side sills and into the lower areas of the redesigned bumpers. The side sills, painted in matt "Reflex Silver" have sporty flares that offer additional protection. The car's side body styling is complemented by 17-inch "Valley" alloy wheels designed specifically for the Volkswagen Alltrack models, door mirror caps painted in glossy "Reflex Silver", an "Alltrack" badge on the wings, a chrome trim strip (matt) beneath the side windows and the "Silver" anodised roof rail.

Exterior – front and rear. The independent front end of the Golf Alltrack features a low-profile radiator grille crossbar in the upper front area that sports an aluminium look (matt) and extends into the headlights. The radiator grille in honeycomb design with a chrome "Alltrack" badge was designed in matt "Black". The lower cooling air intake in the fully redesigned bumper also has a honeycomb structure.

Another visual highlight here is a distinctive crossbar in "Reflex Silver", which extends across the entire width of the bumper and into the side body where, like a wing, it integrates the standard fog lights (with integrated cornering lights). Underbody protection in "Reflex Silver" completes the lower section of the front end. At the rear, the Golf Alltrack – which is equipped with dark-red rear lights – has a new bumper design with a visually dominant underbody protection in "Reflex Silver". The version with the 180-PS TSI engine can be made out by its dual-branch exhaust system with separate chrome tailpipes on the left and right. Meanwhile, the TDI versions have a sporty visual presence with dual chrome tailpipes on the left side.

Interior.The high-end interior of the Golf Alltrack reflects its sporty off-road character. In this car, interior styling is defined by such details as a leather-trimmed steering wheel and gear shift lever, custom seat covers with the "Alltrack" badge on the backs of the front seats, accents in "Dark Magnesium" (centre console) and "Tracks" (dashboard and interior door trim) as well as ambient lights in the door trim. Other standard features (in addition to the "Comfortline") include: automatic climate control ("Climatronic"), LED reading lights for the front and rear seats, lights in the front footwell areas, "Composition Touch" infotainment system, Driver Alert System and cruise control system. Exclusive features include a chrome trim strip with "4MOTION" lettering on the centre console compartment lid, stainless steel door sill plates with "Alltrack" lettering and chrome accents for various switches and buttons (lights, electric windows, mirrors). Sporty features include the (optional) black rooflining, including upper roof pillar trim elements, and custom pedals and foot rest with an aluminium look.