On top of being Volkswagen of America's number one-selling car for decades, the Jetta is one of the world's most successful sedans with more than 14 million units sold since 1979. Last year alone, Volkswagen delivered 925,000 units worldwide—making the Jetta the top-selling car for both the brand and of the entire VW Group. Now, at the 2014 New York International Auto Show, Volkswagen is presenting the world premiere of the redesigned 2015 Jetta sedan.

In addition to new styling touches at the front and rear of the car, the 2015 Jetta has notable changes throughout. Overall efficiency has been improved by reducing air drag and utilizing new tires that help improve rolling resistance. New driver assistance systems are available, such as Blind Spot Detection, frontal collision warning and rear cross-traffic alert. Inside, the Jetta sees an upgraded interior with new materials and an enriched assortment of available equipment. The 2015 Jetta continues to offer three four-cylinder gasoline engines (2.0-liter naturally aspirated and 1.8T and 2.0T TSI® Gen 3 turbocharged EA888 engines), a 1.4-liter turbocharged full hybrid version, and a new EA288 2.0-liter turbocharged EA288 TDI Clean Diesel engine. Furthermore, the 2015 Jetta has been engineered to meet or exceed all current U.S. safety standards. 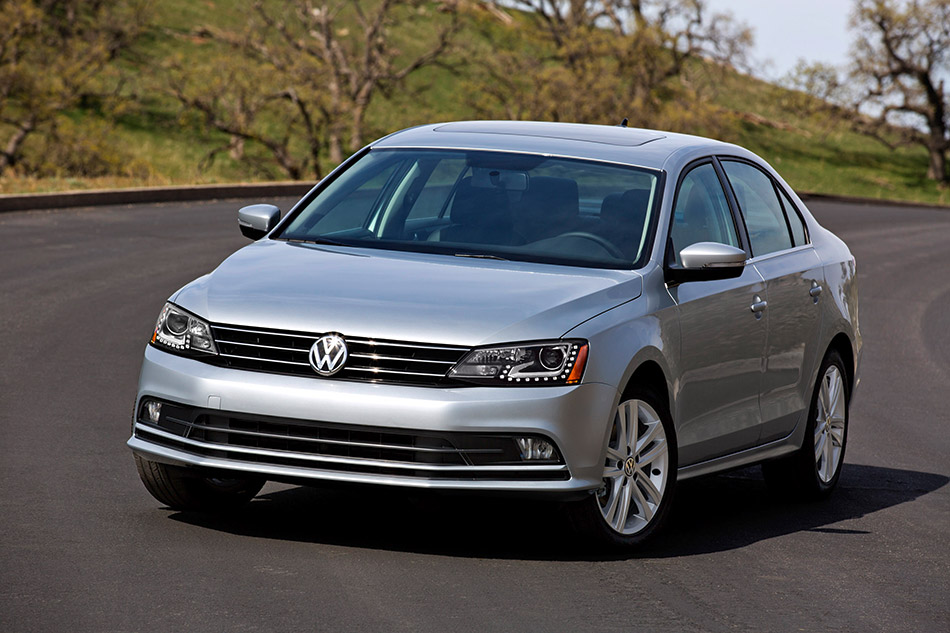 The 2015 Volkswagen Jetta is expected to arrive at U.S. Volkswagen dealers in the third quarter of 2014.

Volkswagen has restyled the front and rear of the Jetta while improving its aerodynamic properties. At the front, the latest generation of the car can be recognized by its redesigned radiator grille with three cross fins, optional Bi-Xenon headlights with Adaptive Front-lighting System (AFS), and a new bumper. The Bi-Xenon headlights have an especially distinctive design: Each daytime running light is formed by 15 LEDs arranged in an L-shaped string alongside and beneath the xenon modules, creating an unmistakable light signature, day and night. A chrome element between the LED daytime running lights and the xenons accentuates the headlights. The new visual band formed by the radiator grille and the headlights, as well as the now larger lower air inlet, give the Jetta a wider and more substantial look. Re-sculpted foglights mounted in the outer areas of the bumper reinforce this effect.

New rear design. The trunklid, taillights, rear logos and bumper of the Jetta have also been updated for 2015. The trunklid has an aerodynamic trailing edge, and on the sides the lines of this integrated spoiler extend into the rear fenders and then into the precise contour of the car's silhouette near the so-called character line. Beneath this are new available LED taillights (GLI and Hybrid only) which feature a bright stripe, as well as a redesigned VW logo. One level lower, the side lines of the trunklid now run downward, which dominates the design. The new bumper underneath it all completes the new rear look of the Jetta.

Optimized aerodynamics. Volkswagen has introduced numerous innovative aerodynamic modifications into the design and equipment of the Jetta. In the front of the car, air drag has been reduced by the new bumper, optimized air intakes, and aerodynamically refined rain gutters on the sides near the A-pillars. A closer look reveals underbody panels at the rear axle and sill covers with wheel spoilers. Jetta models equipped with the 1.8T engine also have modified brake ventilation channels. Jetta GLI and Jetta Hybrid models sport special aerodynamic elements such as new front/rear spoilers and sill extensions.

Updates to the Jetta's interior are subtle but significant. On mid- and high-level trims, the dash, gauges can now framed in chrome-edged tubes, with an available color multifunction display nestled in between. Elsewhere, the 2015 Jetta sports several optional new features based on trim: a new multifunction steering wheel; redesigned air vent controls; piano black accents on the center console and around the gear shift lever; new chrome accents around the dual-zone Climatronic® control; ambient lighting; and new fabric colors and designs for the seats. 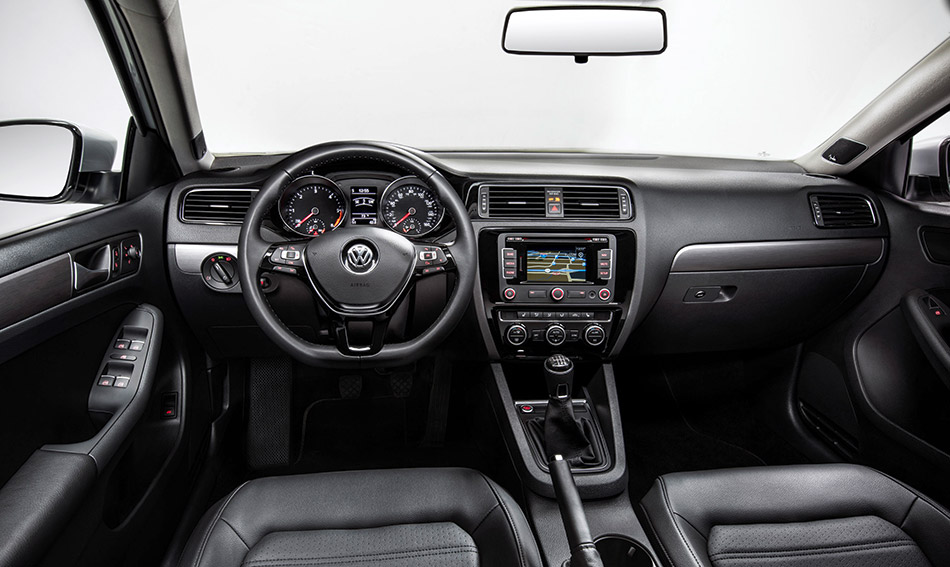 Blind Spot Detection. Blind Spot Detection utilizes a flashing symbol in the outer area of the side mirrors to make the driver aware of vehicles in the blind spot next to the Jetta or approaching from the rear. This is intended to help improve driver awareness when changing lanes. The system uses radar sensors to "monitor" a space around the vehicle with a range of approximately 65 feet. Customers who choose the Blind Spot Detection option automatically get the rear cross-traffic alert assistance system as well.

Rear cross-traffic alert. The new rear cross-traffic alert assistance system is offered in tandem with Blind Spot Detection. The system not only helps alert the driver to stationary and moving vehicles directly behind the vehicle; it also detects vehicles approaching from the side which may be difficult for the driver to see. The radar-based sensor module can even detect objects up to 65 feet away. In case of an impending collision, the system gives an acoustic warning.

Bi-Xenon headlights. Bi-Xenon headlights with LED daytime running lights are now available. Also integrated in the new generation of headlights is what is referred to as the Advanced Front-lighting System (AFS). In this system, the headlights track the steering angle and can be turned up to 15 degrees, illuminating corners in turns.

Improved efficiency. The 2.0-liter 150-horsepower EA288 TDI® Clean Diesel engine offered in the 2015 Jetta is one of the most fuel-efficient engines in its class and already conforms to the upcoming LEV3 emissions standard in the USA. Compared to the previous engine, the efficiency of this new generation TDI was improved by another eight percent. In city driving, the Jetta TDI Clean Diesel with a manual transmission delivers a manufacturer-estimated 32 city/45 highway mpg; its combined fuel economy is projected to be around 37 mpg.

Torque-strong. The common-rail direct-injection engine with two balancer shafts is an exceptionally comfortable and dynamic engine. The 2.0 TDI Clean Diesel engine in the Jetta develops its maximum power over a low speed range of 3500 to 4000 rpm. The maximum torque of 236 pound-feet is available from just1750 rpm up to 3000 rpm.

First new-generation MDB in the U.S. The TDI Clean Diesel engine in the Jetta is the first engine to be introduced to the U.S. which utilizes the new modular diesel system (MDB) from Volkswagen. Many components of the MDB engines are used in a modular way, such as the exhaust system components and the injection system, turbocharging systems, and forced induction cooling within the intake manifold module. Besides helping to reduce emissions, Volkswagen also designed the new TDI engine for minimal internal friction, for instance using piston rings with lower pretension and very low-friction camshaft bearings. Energy efficiency has also been optimized by using an oil pump with volumetric control and two pressure levels. An innovative thermal management system makes use of separate coolant loops for the cylinder head and the crankcase during the warm-up phase and has a water pump that can be deactivated.