It has been ten years since Volkswagen introduced the first Golf R – still in the Golf VI back then. At that time, its torque-rich four-cylinder turbo replaced the predecessor R32 with an naturally aspirated VR6 engine. Almost at the same time, R GmbH was founded – an independent company that would from then on look after the sporty top models from Volkswagen. For ABT Sportsline, the vehicles produced there were always the start of all creation. The same applies to the new Golf VII R with an environmentally friendly gasoline particle filter: The world's largest tuner for vehicles from the Volkswagen and Audi Group just presented the ABT Powerboost for it. "This allows us to produce another extra boost," explains Hans-Jürgen Abt. The auxiliary ABT Engine Control (AEC) unit increases the standard power from 300 HP (221 kW) and 400 Nm to 350 HP (257 kW) and 440 Nm. 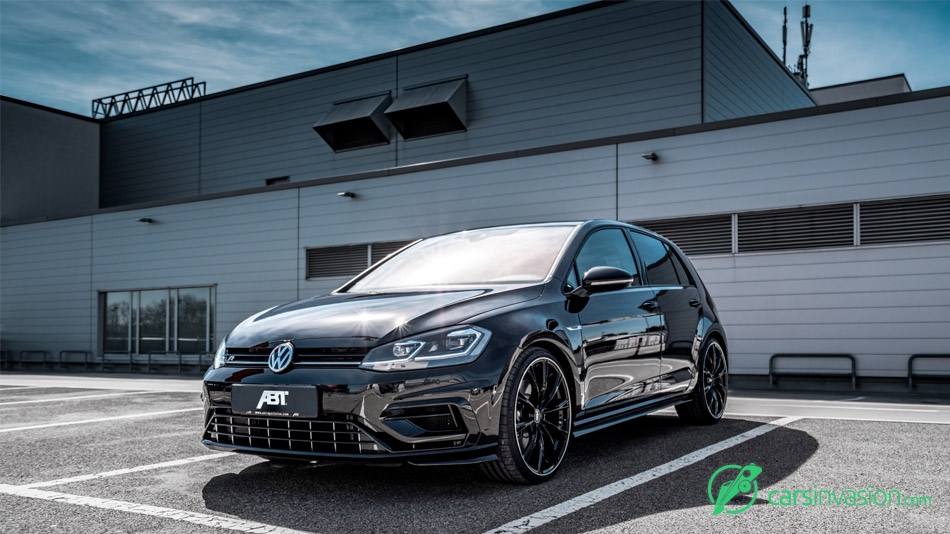 Thanks to the successful setup, the Golf VII R keeps on course stoically and reliably, even in during fast corner changes.The transverse dynamics can even be improved further with ABT suspension springs or an ABT height-adjustable suspension kit. The ABT sport anti-roll bar kit is the icing on the cake. Basically, the components in this kit are a type of torsion-bar springs. They reduce rotation around the longitudinal vehicle axis by creating a connection between the left and right suspension side of an axle.

The crew at ABT Sportsline not only makes the Golf VII R faster, though, but also visually more individual. Alloy wheels are available in 18, 19 and 20 inch sizes, whereby the designs ABT ER-F, FR, DR and GR can be selected. With its diamond-machined elements, the latter is a particularly attractive choice in matt or glossy black, as the car in the photos demonstrates with its 20-inchers in glossy black. Other features include the spokes which bisect towards the rim flange, a recessed hub area and a strongly concave rim design.

The bold look is perfected by the distinctive muffler system, which is currently being developed in Kempten for the Golf VII R with gasoline particle filter. Its four dark chrome-plate tail pipes each have a diameter of 102 mm and deliver a brilliant acoustic performance. After all, the idea of this "strong" Golf is not only to convince meters and gages, but also to win plenty of hearts.