Audi is taking a large step towards sustainable future mobility with the A3 Sportback g-tron. The five-door premium compact model, which will appear on the market at the end of the year, runs on both the fossil fuel natural gas and on climate-friendly Audi e-gas, which Audi itself produces at a recently completed power-to-gas plant. It innovatively combines ecological balance, economy and high-tech solutions.

The Audi A3 Sportback g-tron, the brand's first natural gas car to go into production, reveals the sheer depth of the technological expertise of Audi – from ultra lightweight technology through the highly advanced infotainment to the driver assistance systems. It showcases state-of-the-art CNG technology (CNG = compressed natural gas), complete with the fuel storage technology. Its two pressurized tanks beneath the trunk floor each hold around seven kilograms (15.43 lb) of gas; they essentially use the recess for the spare wheel, thus impinging only minimally on the load capacity. 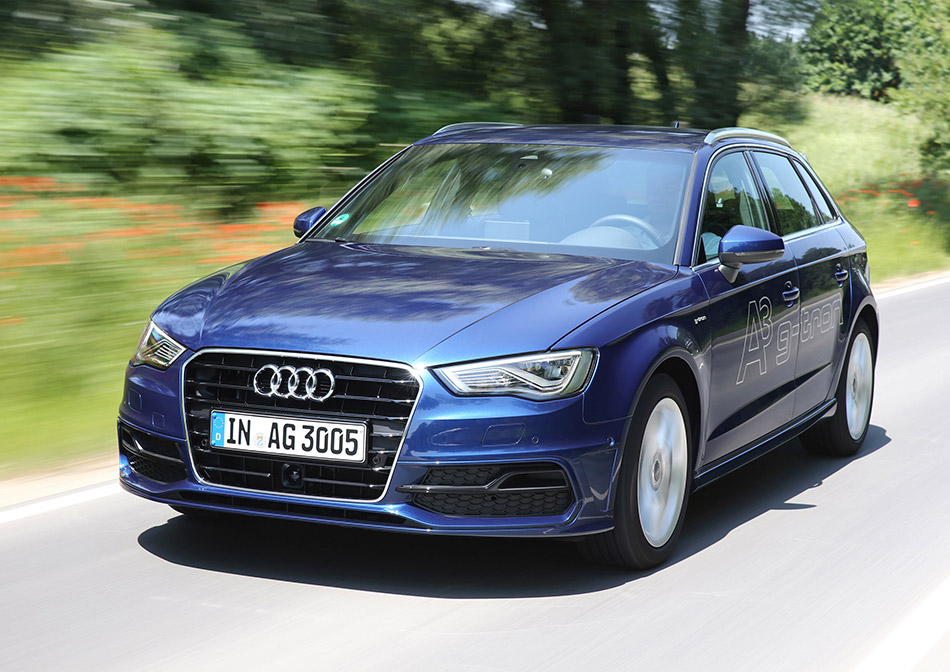 These tanks, which store the gas at a pressure of 200 bar, use the ultra lightweight construction principle of Audi: They weigh 70 percent less than conventional steel bottles, each of them weighing 27 kilograms (59.52 lb) less than an equivalent steel version. Their composition reveals an innovative layout: The inner layer consists of a gas-impermeable polyamide matrix, while a second layer of carbon fiber reinforced polymer (CFRP) gives the tank its extremely high strength; a third layer of glass fiber reinforced polymer (GFRP) provides protection against damage from the outside. Epoxy resin is used to bind the fiber reinforced materials.

A second highlight of the Audi A3 Sportback g-tron is its electronic gas pressure regulator. This compact and lightweight component reduces the high pressure of the gas flowing from the cylinders down to around five to nine bar in two stages. It ensures that the right pressure is always present in the gas rail and at the injector valves – low pressure for efficient driving in the lower speed range, and higher when the driver wants more power and torque.

When the pressure in the tank falls below 10 bar when there remains about 0.6 kilogram (1.32 lb) of gas, the engine management automatically switches to gasoline operation. The Audi A3 Sportback g-tron is designed as a bi-fuel concept. In the NEDC cycle it drives over 400 kilometers (248.55 miles) on gas and a further 900 kilometers (559.23 miles) on gasoline, so its overall range is comparable to a TDI. The driver information system always shows current consumption; two displays in the instrument cluster indicate the tanks' fuel level. The filler pipes for both are located behind the same flap. 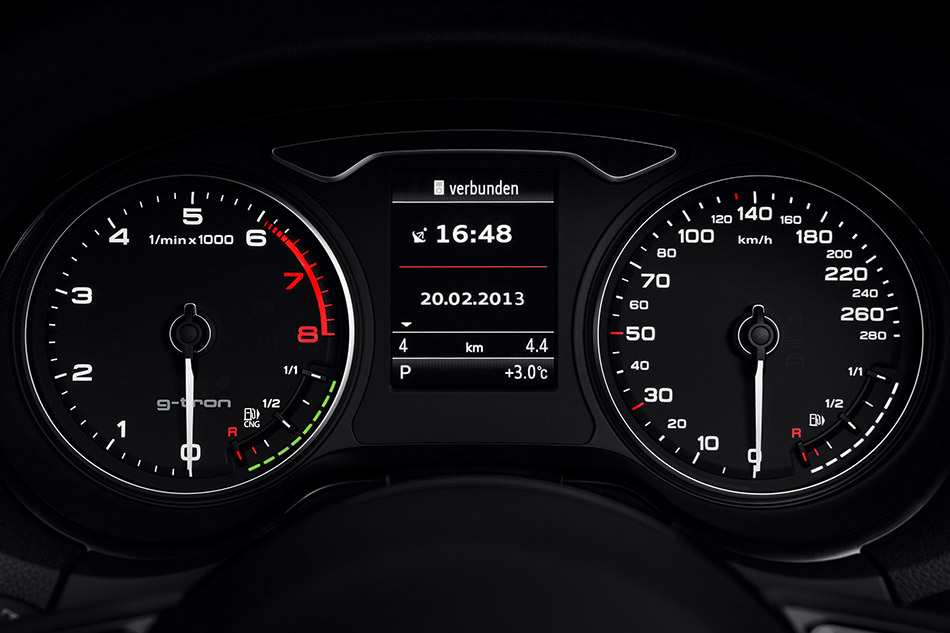 After refueling, and whenever it is very cold, the Audi A3 Sportback g-tron is started with gasoline initially, then it is switched over to natural gas as quickly as possible. Its engine is a modified 1.4 TFSI; the cylinder head, turbocharger, injection system and catalytic converter are specifically designed to run on gas. With an output of 81 kW (110 hp) and 200 Nm (147.51 lb-ft) of torque, the compact five-door model accelerates from 0 to 100 km/h (62.14 mph) in less than 11 seconds; it achieves a top speed of more than 190 km/h (118.06 mph).

The Audi A3 Sportback g-tron is the benchmark in its segment for efficiency and economy. Its CO2 emissions in the exhaust gas remain below 95 grams per km (152.89 g/mile) in the NEDC cycle, and the fuel costs for the customer are around four euros per 100 km (62.14 miles). Over 100 km (62.14 miles), the compact car uses on average less than 3.5 kilograms (7.72 lb) of natural gas or Audi e-gas – the fuel that is produced in the Audi e-gas project from CO2 and water using renewable power. This fuel is a major step into the future of mobility for the brand with the four rings – Audi is the first carmaker to be establishing production facilities for a whole chain of sustainable energy sources.

The e-gas plant that Audi has set up in Werlte (Emsland) involes two major process stages – electrolysis and methanation. In the first step, the plant uses renewable power to break water down into oxygen and hydrogen in three electrolyzers. The hydrogen obtained from this process can be stored separately if required, for powering future fuel-cell vehicles.

However for the time being, in the absence of an area-wide hydrogen infrastructure a second process step is carried out: The hydrogen is then reacted with CO2 to produce synthetic methane, or Audi e-gas. In chemical terms it is almost identical to the fossil fuel natural gas and can therefore be distributed throughout Germany using the natural gas grid to CNG filling stations, for refueling vehicles.

The carbon dioxide used in the Audi e-gas plant is waste gas from a nearby biomethane plant that runs on organic waste and is operated by power utility EWE. That plant separates it from the crude biogas to produce highly pure biomethane. The Audi e-gas plant is expected to achieve an annual output of around 1,000 metric tons, capturing around 2,800 metric tons of CO2 that would otherwise pollute the atmosphere. As a result, the fuel is climate-neutral.

Throughout the entire production process at the e-gas plan that Audi has erected jointly with the plant engineer ETOGAS (formerly SolarFuel), the efficient use of energy flows is a high priority. The waste heat that is given off during methanation is put to good use in sanitizing the waste and preparing the biogas, appreciably increasing overall efficiency. The Audi e-gas plant is currently being commissioned and from summer 2013 will be supplying the grid with synthetic gas. 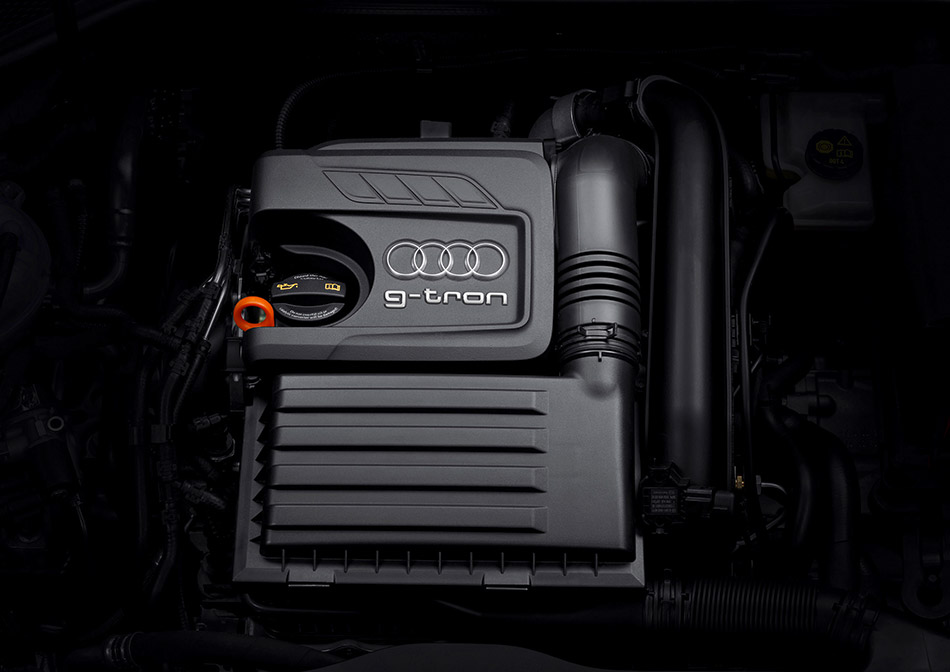 Audi e-gas is a high-energy fuel that is ideal for powering combustion engines. The CO2-neutral e-gas from Werlte can power 1,500 new Audi A3 Sportback g‑tron vehicles, each driving 15,000 kilometers (9,320.57 miles) a year. In operation, these cars do not produce a single gram of CO2 that has not previously been captured during the e-gas production process. Even in the comprehensive well-to-wheel calculation, which includes the outlay for building and operating wind turbines and the e-gas plant, current forecasts predict the CO2 equivalents to remain under 30 grams per km (48.28 g/mile).

The A3 Sportback g-tron can fundamentally run on natural gas, the biomethane on sale at certain filling stations, or e-gas. Customers wanting to buy e-gas can sign up for a particular contingent of e-gas for the A3 g-tron at their Audi dealer. This enables them to take part in an accounting process that ensures that the amount of gas that they put in their vehicle at the natural gas filling station has been supplied to the grid by the Audi e-gas plant.

They pay for the e-gas monthly on the basis of a fuel supply agreement. The customer takes this out separately to the lease contract. They pay the CNG price advertised at the filling station by monthly bill for their e-gas card. This serves as an accounting instrument that gives the customer certifiable evidence of the sustainable mobility service they are receiving. It will be accepted at most CNG filling stations throughout Germany – if customers so wish, their navigation system or smartphone will locate these for them. But the A3 Sportback g-tron can of course also be refueled at any other natural gas station, and will then be supplied with natural gas or biomethane like any other natural gas vehicle.

The German energy industry as a whole stands to benefit from the Audi e-gas concept. There is still the unsolved question of how to store renewable power, of which there is an increasingly frequent oversupply following the energy policy rethink, efficiently and independently of location. The world first of linking power with the gas grid as demonstrated by the e-gas project in Werlte offers a solution to this problem by storing the e-gas produced in the natural gas grid, the biggest and most efficient form of energy storage available. This prospect could provide a major boost to the expansion of renewable energies.