Like will to like! True to this motto, the located in the very north of Baden-Wuerttemberg Hperformance manufacture has chosen two Audi TT RS cars in a bit for ennobling. Individuality according to customer's wish with hand crafted rough materials, as stainless steel, aluminum and carbon, is even the ultimate imperative for the tuning forgery in Osterburken city. And this fact obliges! Therefore, the company is not satisfied with copying, but shows own developments. Thus, to fulfill individual customer's wishes is not any problem, but it is passion. Both vehicles – by pure chance, the one is a glossy white one and the other one comes in mat black – are equipped by a company own exhaust system type "sound at will" and sound, nevertheless, in spite of identical modifications absolutely differently. This fact proves that the promised "sound of will" is absolutely achievable – hardly to be ignored while the photo shooting. The two Audi TT RS "make their voice heard" by an exhaust system made by HPerformance beginning at the turbocharger – with a 80-mm pipe beginning from the turbocharger on the one side, and on the other with two 76-mm pipes beginning from the turbocharger. 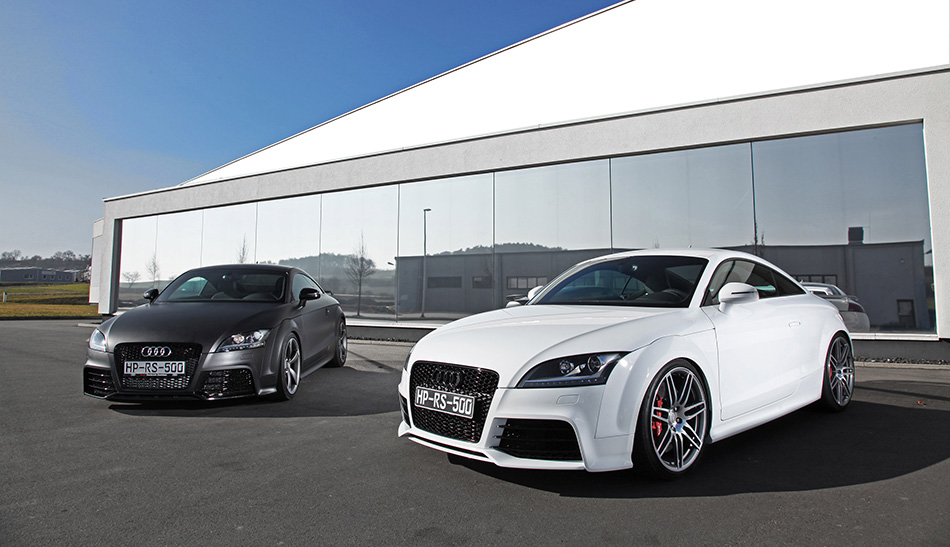 Both vehicles are equipped by HJS racing cats and valve commands, adjustable via key switches or remote control, respectively. The made of aluminum intercooler and the upgrade turbocharger HPXT-510 are also identical, likewise also the made by Hperformance suction system "street" with 80 mm suction pipe, optimized intake manifold and RAM air charging behind the front. Special ignition plugs and a software adaptation in co-operation with Siemoneit Racing on the power testing station give each one of them 500 HP (= 368 kW) and 660 Nm of torque, whereas the latter may be increased up to 710 Nm when necessary. Whilst the white vehicle got a Hperformance clutch upgrade with single mass flywheel, reinforced pressing plate and sintered metal friction washer, the mat black one received a step 3 DSG adaptation. Last but not least: Both cars have Bilstein B16 coilovers, H&R stabilizers, all around installed ceramic braking systems coming from the big brother named R8 GT and steel flex braking pipes.

There must be mentioned the fact that HPerformance is ready for a 700 HP configuration level for Audi TT RS! By the way – sometimes, patience is virtue …