When the first-generation Mazda 3 was released, it introduced a level of driving pleasure and sense of quality which exceeded its class. Five years later, total sales have surpassed 1.8 million units and the Mazda 3 has won a total of 90 automobile awards around the globe. The new Mazda 3 builds on the virtues of the first generation and reflects increasing worries about environmental issues, the rapid expansion of motorization, and growing diversity in the criteria people use to value cars. Development was carried out by R&D staff in Japan, the US, and Europe working together to reflect Mazda's long-term vision for technology development, "Sustainable Zoom-Zoom," which aims to achieve harmony between driving pleasure and environmental and safety features. As a result, the all-new Mazda 3 evolves the original model's acclaimed sporty driving and design, and achieves top class environmental and safety performance.

Program Manager Yoshiyuki Maeda says, "We focused on achieving an exhilarating experience that drivers would sense directly. We targeted dynamic driving performance that responds to the driver's intention and excellent environmental and safety features that offer pride and confidence whenever the driver is behind the wheel. In order to create exhilaration in every element of the vehicle, we worked to enhance each aspect of the driving quality." 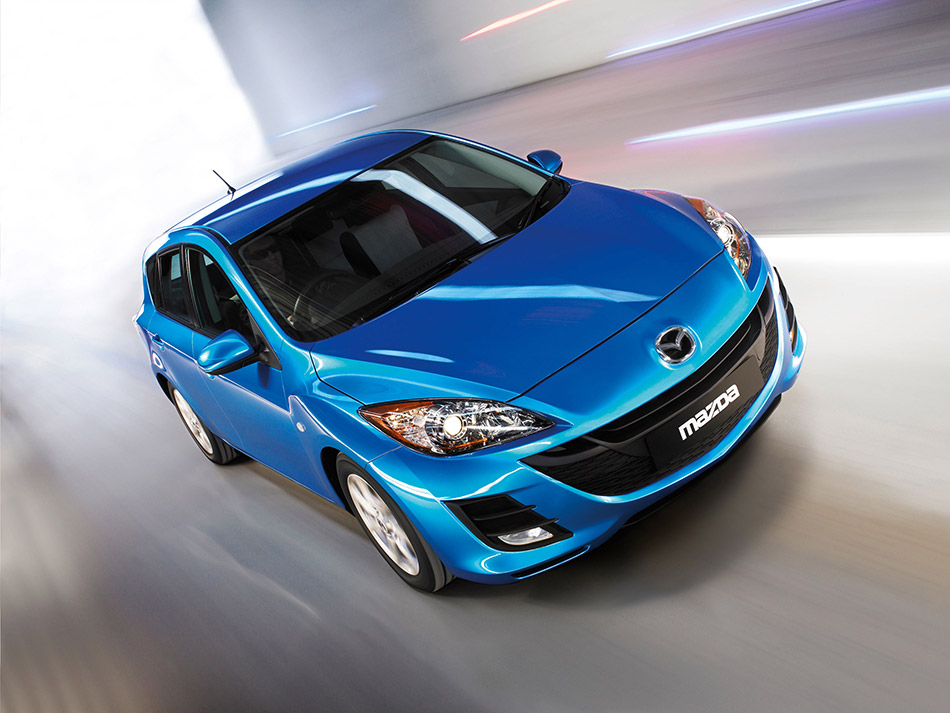 The design concept for the new Mazda 3 was "remaining faithful to an inherited identity while evolving the design to make it more expressive." While retaining some of the original model's dynamic lines, richer expression was sought to create a more emotional design. As a result, we achieved a powerful design that enhances recognition of Mazda's unique value.

A distinctive new front fascia is formed by the 5-point grille and openings at the front corners. These design cues combine with the sculpted shape of the hood and the bold, expressive lines that connect the hood to the front pillars. All the lines seem to flow into the center just below the 5-point grille, which creates a stronger expression of power and dynamism. From the side, the front fender line smoothly morphs into the beltline, clearly identifying the vehicle as a Mazda and communicating dynamism. The line of the side sill curves up and seems to connect with the rear spoiler to emphasize the vehicle's compact size and express its agility. In order to make the surface more expressive, Mazda designers slightly elaborated the depth of the hood edge, front fenders and the three-dimensional shape of the protruding body sides, carefully crafting curves that subtly reflect changes in natural light.

The rear view boasts a sporty design with wide stance. The strongest features are the protruding shoulders and emphasized center-focus design. This concept was carried over from the first generation Mazda 3 and made bolder to represent expressiveness. All the lines of the rear view are designed to concentrate on the brand symbol in the center. The impressive C-pillar design was also inherited from the first-generation Mazda 3 and made more prominent. This was made possible by Mazda's expertise in stamping technology.

Inside the all-new Mazda 3 is a sporty yet highly refined cabin. The dashboard sweeps out from the center toward both sides with dynamic flair as though it is flexing powerful muscles. The large center display and controls are laid out around the driver to deliver just the right feeling of snugness. The angle of the center panel was adjusted after careful analysis of the driver's hand movement, producing a more stylish and dynamic design. A soft, wood grained surface with minimized parting lines on the top of the dashboard enhances the interior quality. The new interactive lighting control enhances the driver's connection with the vehicle.

Driving dynamics - The evolution to a more sophisticated sporty ride

The development theme for the all-new Mazda 3's dynamic performance was "exhilarating driving." It refers to the satisfaction derived when a car acts in perfect concert with the driver's intentions. It could also be described as the sense of accomplishment derived when the driver can handle the car easily and have it respond exactly as desired to their will.

Toward this end, the development team didn't settle for merely adding small changes to the already high levels of body rigidity and driving performance. Rather, they made every effort to completely eliminate all negative aspects, from the engine noise, vibration in the body and road noise. At the same time, the team retained all positive aspects including the sound of the engine, the feeling of acceleration, the quality of brake response and control and the road holding sensations.

Powertrains for all driving experiences

The MZR 2.0-litre petrol engine underfloor catalyst is the world's first vehicle catalyst to be constructed with single nanotechnology, which controls even finer materials structures than nanotechnology. It is used to embed individual particles of precious metals, which are less than 5 nanometers in diameter, into the catalyst base material. This new development enables Mazda to reduce the amount of expensive precious metals such as platinum and palladium by 70 to 90 percent without impairing catalyst performance. The catalyst is an important part of Mazda's efforts to reduce reliance on limited resources.

To deliver just the right balance between fuel economy, light steering-wheel operation and a feeling of stability, all configurations of the all-new Madza3 are equipped with the Electro-Hydraulic Power Assist Steering system (EHPAS) that has earned high acclaim on the first generation Mazda 3. The suspension is based on the first generation Mazda 3 system, and has been enhanced to ensure even nimbler response to steering wheel operation, and also to improve roll control and maintain a flatter ride by strengthening the suspension damping. In the brake system, the vacuum booster has been tuned and the feeling of initial brake application has been optimized. The overall result is outstanding response and reassuring linearity under all braking conditions.

The basic development concept for the body shell of the all-new Mazda 3 was to improve the overall balance of the body's rigidity and ensure it firmly absorbs the reaction force of the dampers. To this end, particular attention went to reinforcing the area around the front and rear suspension mounts and the joint sections in each corner, which are subject to greater stress. Structural adhesive was used to strengthen the joints for the front and rear suspension towers, and spot welding was added to reinforce the joints of the door openings. The result is a substantial improvement in rigidity and body hysteresis (the degree of car body deformation due to repeated applications of torsional load).

We adopted a new approach, called "airflow management," to optimally control the flow of air. Conventional car designs create a large amount of drag, a loss that adversely affects aerodynamic performance. However, the all-new Mazda 3 does not take in excess air and thereby minimizes drag. One specific example is the upper and lower grille openings, which concentrate ram pressure (wind pressure) in a manner that eases the intake of air and directs it effectively to cool the engine. Additionally, the front corners of the upper body were reshaped and round front tire deflectors were added to control the flow of air along the vehicle's sides. As a result, the drag coefficient for the European specification 5-door hatchback and 4-door sedan are respectively 0.30 and 0.28, amongst of the bests in the segment. These measures helped the engineers attain top-class levels for wind noise reduction, high speed stability and fuel economy.

Cabin environment - sense of oneness between car and driver

Aboard the all-new Mazda 3 is a new Human Machine Interface that contributes to the sense of oneness between the car and driver. The cabin interior is designed to allow the driver to concentrate on driving and also appreciate the level of quality in both design and the materials used.

The new "zone layout" approach focuses on improving visibility and more intuitive controls which provide "a sense of the car and driver as one" and "a reassuring sense of confidence that frees the driver to concentrate on driving." First, the Mazda 3 development team integrated the information display and positioned it towards the front in the optimal "zone." This placed the information necessary while driving where it can be seen with the least amount of eye movement. Next, the engineers placed all the controls and switches within a single "zone" closer to the driver's hands. Designing the cockpit with controls and information display in separate zones frees the driver to concentrate on driving.

Based on the concept of the zone layout, Mazda developed the Multi Information Display (MID). It clearly shows information on all the equipment needed while driving, such as the trip computer, audio system and compact GPS system (optional), which can be operated easily by switches mounted on the steering wheel.

The raised sides on the front of the seat cushions were made 20mm larger than on the first generation Mazda 3 to increase the leg support for a better fit. The seat backs were also extended by 35mm, which better supports the occupant's posture. Seat position adjustment controls were also evolved. The new power seat has a 3-position memory function. Upon approach to the car, the left-front seat automatically adjusts to the settings chosen by up to 3 different drivers by recognizing the code of the key fob. High-grade models feature standard sports seats.

The interactive lighting control increases anticipation of a Zoom-Zoom driving experience. For example, when the driver unlocks the car door, the cockpit spotlight, room lamp and lights in the door handles illuminate in sequence, along with the meters and centre display, to gently welcome the driver and passengers (depending on grade). The illumination even responds when the driver operates the controls, strengthening the interactive communication between driver and car.

Many improvements were made to structural rigidity and powertrain NVH performance to provide a quieter, more pleasant ride, including the reduction of high frequency booming noise sometimes heard when decelerating while further evolving a sporty engine note. Increasing the rigidity of components and joints also helped to deliver a quieter ride that rates among the class leaders. The sound pressure level of road noise was curtailed by 6 to 11 percent over the previous model, and wind noise was reduced by approximately 6 percent, to 59.0 dB at 100 km/h with a 5 m/s crosswind, placing the all-new Mazda 3 among the quietest in the class.

Mazda has achieved recyclability ratios of over 90 percent. Beginning in 2005, Mazda also became the first in the auto industry to fully implement 'bumper-to-bumper recycling' that recycles material from damaged bumpers. Additionally, we have completely eliminated the use of lead, hexavalent chromium, cadmium and mercury, with the exception of exempt parts. Mazda led the motor industry by being the first to adopt a low-VOC sealer that reduces toluene emissions to less than one tenth of conventional sealers. Furthermore, all of Mazda's domestic production sites have attained ISO 14001 certification.