When the new Audi TT Roadster removes its top, it will get breezy! After all, even in the four-cylinder 2.0 TFSI, 230 hp (169 kW) make for high wind speeds indeed. Now,  ABT Sportsline upgrades the car – as with the coupé – to a mighty 310 hp (228 kW), no less than the production-type TTS, which, incidentally, ABT Sportsline beats by 440 to 370 Nm. "And to make you even more certain of its quality, I issue a comprehensive guarantee to go with this ABT Power New Generation uprating. This guarantee is now valid in many European countries," says CEO Hans-Jürgen Abt. 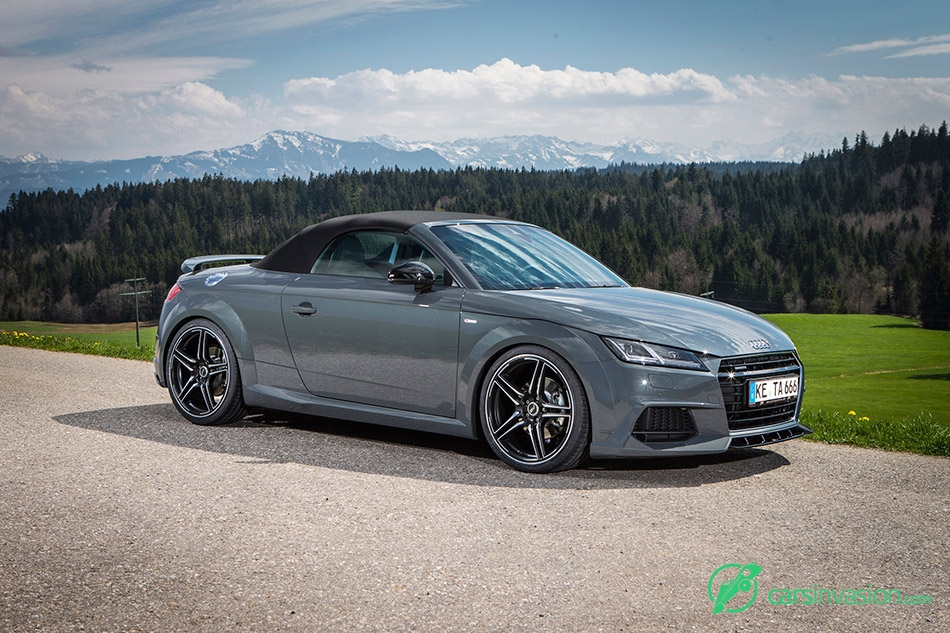 With its successful set-up, the TT also shows that the most fun is found when taking bends. ABT suspension springs and stabilisers make for much balance and agility. ABT wheel spacers of 24 or 30mm also make it very assertive. And the various ABT alloy wheels all come into their own here, e.g. the new FR in mighty 20''. The CR, DR and ER-C and the very exclusive ER-F (forged) are also available, some in 18 and 19'', too, and in various colours.

And for the third generation of the TT, the globally largest tuner of cars produced by the Volkswagen Group provides a body kit that makes this sports car look good from any angle, too. ABT Sportsline makes its edgy face appear even more dynamic with a front skirt add on featuring a spoiler lip. Specially designed mirror caps with the ABT logo complete the front. Whoever sees the ABT TT in their rear-view mirror, will soon see its newly designed rear. Through the fixed rear wing and the skirt insert with an offset centre, the car is definitely made more racy, an impression also underscored by the ABT exhaust system with black-chrome-plated tailpipes and lasered ABT logos. Drivers and passengers can thus enjoy a real open-air concert whenever the pedal hits the metal.