The 2005 Ford Mustang Convertible was designed from the ground up to deliver a more rigid body structure without adding burdensome weight. This was accomplished by engineering it in tandem with the Ford Mustang coupe. An added benefit of this process - one that helped meet a goal set for the convertible's exterior design - was that it provided the car with a cohesive, integrated look. It does not look like a coupe that has undergone reconstructive surgery to become a convertible.

The fabric top also seals better than did those of previous models and it affords superior rearward visibility. Looking for new and better ways to do things, Ford engineers designed a z-fold top that gives the Ford Mustang Convertible a finished appearance with the top down.

Aside from the top, the 2005 Ford Mustang Convertible shares the look of a legend with its coupe sibling. The signature long hood, short deck and classic design cues may be found on both. There's an unmistakable hint of Mustang notchbacks of yesteryear in the convertible's profile and stance - with the same athletic proportions, save for today's bigger, wider wheels and tires, that make it look as good at rest as it does at speed. Design influences of the 2003 Ford Mustang GT Convertible Concept are clearly visible. 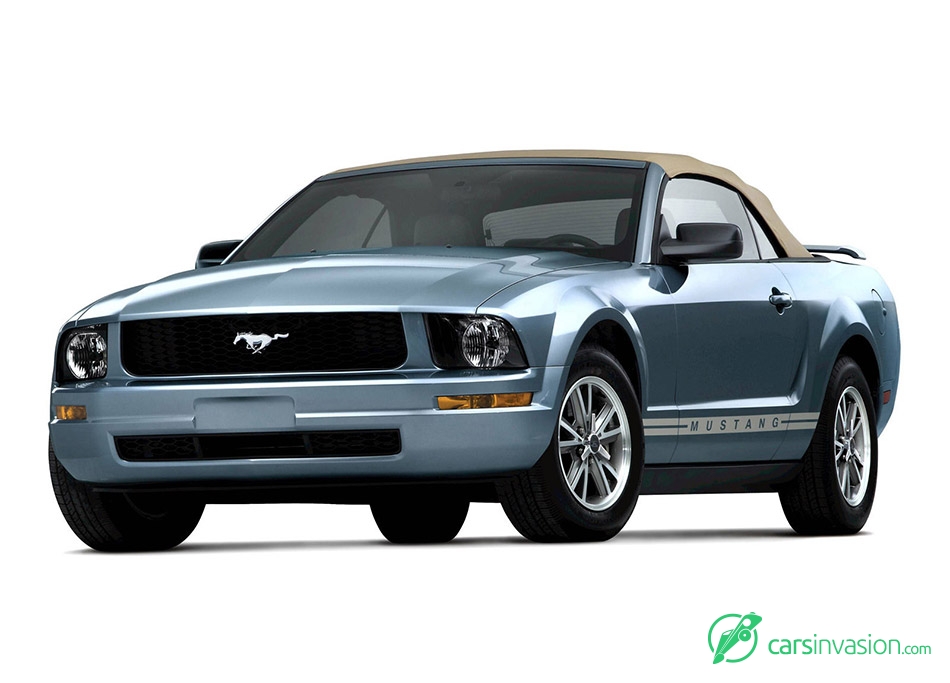 Just as it does with its exterior design and engineering, the 2005 Ford Mustang Convertible makes a statement with its interior.

Thanks to intelligent engineering that resulted in a convertible platform with more than twice the torsional stiffness of the previous version, this is the most quiet and solid drop top Ford Mustang ever produced. The squeaks, shakes and rattles to which convertibles typically are prone are startlingly missing from the 2005 Ford Mustang Convertible.

Also improved is the rearward visibility. The 2005 Ford Mustang Convertible comes with a wide glass backlite (including a defroster), full quarter windows and slim C-pillars, all of which offer a driver a better look out the back.

Both passengers in the back and front will appreciate the lack of wind-related buffeting and noise when the top is down. With the windshield header more steeply raked than on the coupe and a modified rear seatback, the 2005 Ford Mustang Convertible has no need for add-on devices to block the wind.

Aside from these touches, the 2005 Ford Mustang Convertible shares the coupe's look of a much more expensive car. Mustang's past is honored by the twin-pod instrument panel and the present is addressed via modern materials and Ford's acclaimed attention to interior design and details. Plus, there's an optional color-configurable instrument panel, an industry first, that gives the driver more than 125 different color backgrounds to illuminate the gauges and controls.

Done Right Because It's Done Light

The typical convertible "conversion" can add as much as 300 pounds. Much of the weight comes from the metal added to brace the structure to restore some of its strength after the top is cut off. Ford Mustang engineers considered how they could add strength into both the 2005 coupe and convertible. For instance, they were able to design body joints and rocker panels that give the convertible a commendable level of stiffness without the need for additional bracing.

The payoff from "adding lightness" is evident. For one thing, the 2005 Ford Mustang Convertible shares its suspension geometry and virtually all its suspension tuning with the coupe. As a result, never before have the coupe and convertible ridden and handled so much alike. Another benefit of the convertible's sensibly managed weight program is that excess poundage does not sap acceleration.

Like the 2005 Ford Mustang coupe, the convertible uses a MacPherson strut front suspension and a rigid rear axle that has surprised the automotive press with its composure and handling prowess. The secret for its success is a three-link setup with a Panhard rod that maintains precise control over the axle.

Steering is via a power-assisted rack-and-pinion system.

Disc brakes are fitted at all four corners. The Ford Mustang GT rotors are the biggest ever used on a mainstream Mustang and the calipers are the stiffest. A 4-channel anti-lock braking system (ABS) is standard on the Ford Mustang GT Convertible and optional on the V6. ABS also comes with traction control. This all-speed system can be switched off when the driver desires to "hang it out" a bit on dry pavement, or when a smoky burnout is in order for an acceleration run.

Mustang is the very symbol of American muscle, and the 2005 Ford Mustang Convertible is no exception.

The base engine is a 4.0-liter SOHC V6. Producing 210 horsepower and 240 foot-pounds of torque, it is more powerful than the 260-cubic-inch displacement V8 that was an option when Ford Mustang was first introduced. 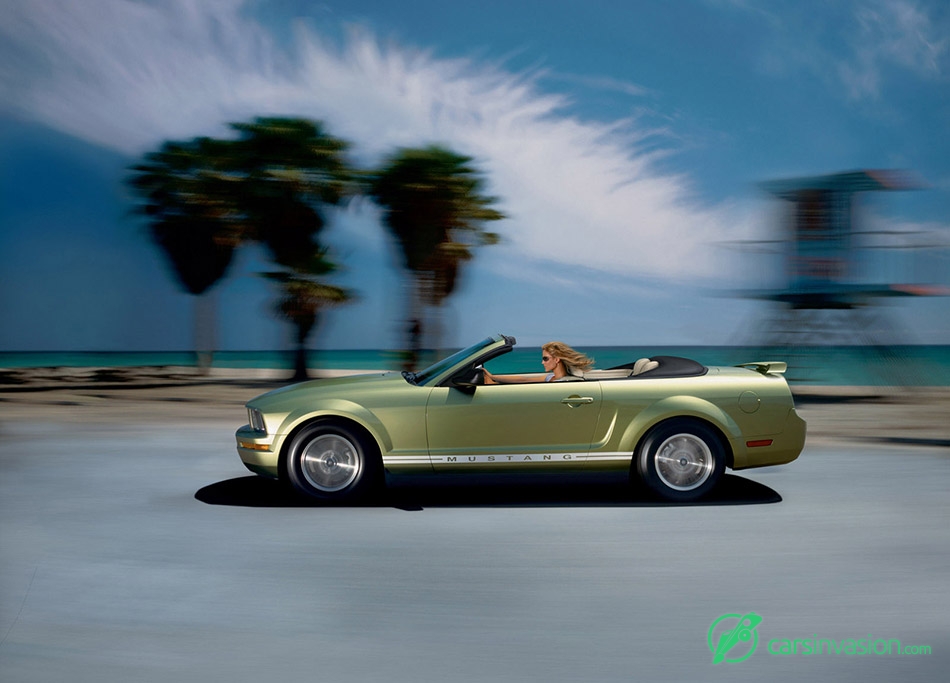 While they are responsive, both Ford Mustang engines are respectful of the environment. Both meet Ultra-Low Emission Vehicle II (ULEV II) standards. On average, the 2005 fleet for Ford Mustangs will emit 57 percent less smog-forming pollution than the 2004-model-year fleet.

For the first time, the Ford Mustang Convertible is available with a five-speed automatic transmission. The 5R55S automatic is optional with either the base V6 or the V8 Ford Mustang GT Convertible and has closely spaced gears to keep the engine running in its power band. This assists acceleration as well as fuel efficiency.

To Protect and Serve

While the agility and acceleration of the 2005 Ford Mustang Convertible can help a driver avoid an accident, not all bad situations can be escaped. That's the point at which passive safety systems take over.

Here again a smartly structured body comes into play. The rigid core of the 2005 Ford Mustang Convertible creates a safety cage that helps protect the cabin from deformation and intrusion during an impact. The front of the car is designed to help channel the violent energy of a collision away from vehicle occupants.

And to help you keep a Ford Mustang Convertible in your stable, an optional active anti-theft package provides an increased level of protection, including a separate alarm sounder, new anti-tow sensor, ultrasonic interior motion sensor, perimeter anti-theft protection and even a high-capacity battery to keep sounding the alarm longer.

New Home For The Range

With the 2005 model year, Ford Mustang has moved to a new plant from its long-time home at the Dearborn Assembly Plant at the Ford Rouge Complex. All Mustangs are now made at the AutoAlliance International assembly plant in Flat Rock, Mich. The 2005 Ford Mustang Convertible will go on sale in the spring.