Munich. It may not be its only strength – far from it – but outstanding efficiency is undoubtedly a BMW 5 Series speciality. Indeed, the model series' achievements in this area have played a major role in securing its global bestselling status at the premium end of the executive class. And now the BMW 5 Series Sedan and BMW 5 Series Touring have set about extending their lead in the efficiency stakes once again. The introduction of a new generation of four-cylinder diesel engines improves further on what was already an exceptional balance between performance and fuel economy. The new 2.0-litre units with BMW TwinPower Turbo technology boost the output of the new BMW 518d and new BMW 520d by another 5 kW apiece. At the same time, fuel consumption and CO2 emissions in the EU test cycle have been reduced by as much as 0.4 litres per 100 kilometres / 10 grams per kilometre. For example, the new BMW 520d Sedan – which now produces 140 kW/190 hp – burns just 4.7–4.3 litres of fuel per 100 kilometres (60.1–65.7 mpg imp) with CO2 emissions of 114–124 g/km. If the optional eight-speed Steptronic transmission is specified, these figures improve further to 4.5–4.1 l/100 km (62.8–68.9 mpg imp) with CO2 emissions of 109–119 g/km, depending on the tyre format fitted.

The new entry-level diesel models – the BMW 518d Sedan and BMW 518d Touring – now offer output of 110 kW/150 hp and peak torque of 360 Newton metres (266 lb-ft). The 140 kW/190 hp variant of the new four-cylinder power unit, meanwhile, boosts peak torque by 20 Newton metres (15 lb-ft) to 400 Nm (295 lb-ft). This version of the engine is fitted in the BMW 520d Sedan and BMW 520d Touring as well as the BMW 520d xDrive Sedan and BMW 520d xDrive Touring models with intelligent all-wheel drive. The likewise updated eight-speed Steptronic transmission is available for the rear-wheel-drive models as an option in place of the standard six-speed manual gearbox, and included as standard on the all-wheel-drive models. 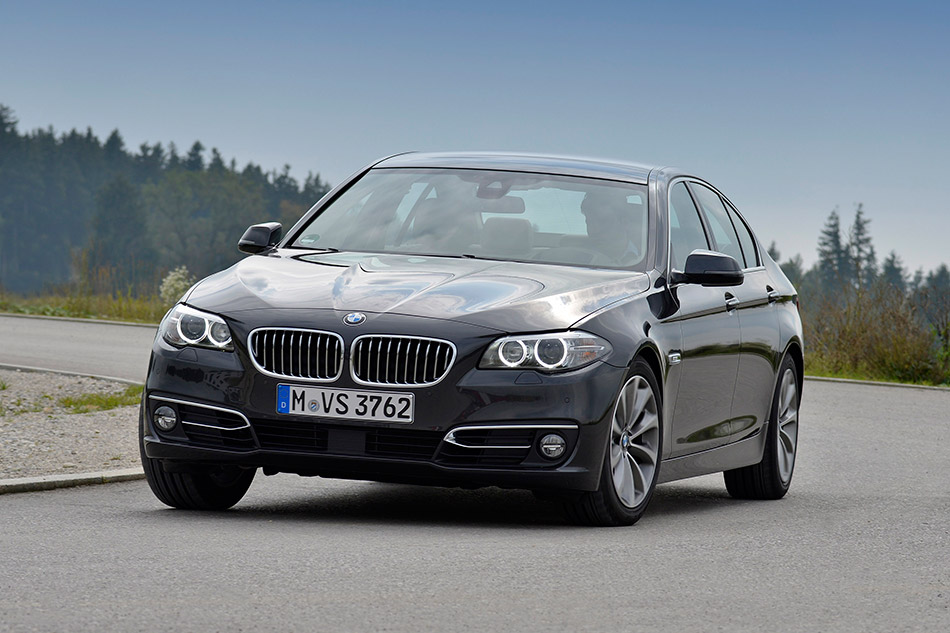 These new gains in fuel economy represent further evidence of the effectiveness of the ongoing development work – focusing on the optimisation of combustion engines and other components – under the BMW EfficientDynamics banner. The current (sixth) generation of the BMW 5 Series has set the pace in its class in terms of economy and driving pleasure from day one, thanks to extensive use of BMW EfficientDynamics innovations, such as BMW TwinPower Turbo technology, the eight-speed Steptronic transmission, Electric Power Steering, Brake Energy Regeneration and numerous other measures. The exemplary levels of efficiency achieved as a result underline the trailblazing character of the BMW 5 Series, as do its elegantly sporty design defined by harmoniously flowing lines, the modern functionality of the interior – with innovative display and control elements – plus driver assistance systems from BMW ConnectedDrive and superior chassis technology. Additional innovations like ECO PRO mode and the Auto Start Stop function (also available with the automatic transmission) are now likewise fuelling this commitment to building on its leading position.

The introduction of the new four-cylinder diesel engines represents the next stage in the process. Both units are members of the BMW Group's new modular engine family and offer top-level BMW TwinPower Turbo technology. They feature an aluminium crankcase with thermally joined cylinder liners (to reduce internal friction) and integrated balancer shafts, turbochargers with variable intake geometry and optimised efficiency, and further developed common rail direct injection systems. The extra output, more instantaneous power delivery and high-revving character that these measures provide go hand in hand with not only greater fuel economy but also a reduction in weight of around two kilograms over the outgoing engines. In addition, fresh advances have been made in the area of acoustic comfort.

The effectiveness of the turbochargers has been enhanced by a new roller bearing and extremely effective and need-based exhaust gas recirculation. The newly designed heat exchangers for the exhaust gas flow have a compact construction and optimised cooling performance, which leads to an effective reduction in maximum combustion temperatures. Another special feature is the vacuum-operated bypass valve, which allows a higher proportion of uncooled exhaust gas to be fed into the engine while it is warming up, for example.

The common rail direct injection system's new solenoid valve inectors ensure the engine uses even more precise quantities of fuel. They now allow increased injection pressure of up to 2,000 bar, which paves the way for extremely economical and, at the same time, clean combustion.

Furthermore, the thermodynamic efficiency around the core engine has been optimised, as have the starting characteristics of the diesel engines with the Auto Start Stop function. The new four-cylinder diesel engines are also equipped with map-controlled oil pumps. The new fully variable vane-type pumps enable continuously adjustable control of the volume flow and therefore the oil pressure in response to the operating status of the engine at any given time. The result is a significant reduction in the energy required by the oil pumps which – as with all the need-based ancillary components – means a greater proportion of the engine's output is available to drive the vehicle.

Another common theme of the new diesel-engined BMW 5 Series variants is the positive influence of the eight-speed Steptronic transmission on performance and fuel economy. The latest update of the automatic transmission has been tuned precisely to the performance characteristics of the new-generation power units. Further improvements to internal efficiency and longer gear ratios open up additional efficiency potential. An rpm-linked vibration damper with engine-specific tuning allows economical driving at low revs to be combined with increased driving and acoustic comfort. In addition, converter slip during gear changes has been further reduced. The updated eight-speed Steptronic transmission also offers a predictive shift strategy, which works in conjunction with the car's navigation system – even when the route guidance is not active – to ensure that gear changes are timed precisely according to the driving situation at hand. Based on navigation data, the gearbox identifies and takes into account an approaching corner, intersection, roundabout or motorway slip road. If the vehicle is approaching an intersection or a bend, for example, it changes down early to the most appropriate gear, making optimum use of the engine braking effect. The gearbox then shifts to the optimal gear to accelerate dynamically out of the bend. Furthermore, interaction with the navigation system allows unnecessary gear changes between two successive bends to be avoided.

This latest round of engine updates sees the BMW 5 Series underlining once again its status as a fertile breeding ground for innovation in the brand's model-line up. The latest advances made under the banner of BMW EfficientDynamics – such as the ongoing process of optimisation in the areas of comfort-enhancing equipment, functionality and intelligent connectivity courtesy of driver assistance systems and mobility services from BMW ConnectedDrive – help ensure the BMW 5 Series represents the leading edge of technology. The BMW 5 Series has therefore laid the ideal foundations to further increase its popularity and maintain its global market leadership at the premium end of the executive class into the future. It is an approach that has enabled the current model to become the leading light in the successful history of the BMW 5 Series, which dates back to 1972. With sales now topping 1.5 million units, the current BMW 5 Series has already outstripped the previous most successful generation.