As it did in 2014, the BMW M4 Coupé will again head the Safety Car fleet in the MotoGP World Championship in 2015. BMW M Division's high-performance coupé has been designed to ensure maximum driving dynamics and with its use on the racetracks of this world in mind. The six-cylinder inline engine with M TwinPower Turbo technology, a high-rev concept and distinct racing genes contributes significantly to the high-performance character of the overall concept. Already the production version of the sporting heart delivers a top performance of 431 hp (317 kW) and provides a maximum torque of 550 Nm (combined fuel consumption of 8.8-8.3 l/100 km, combined CO2 emissions of 204-194 g/km) over a broadly usable range of revolution speeds.

Technology transfer with potential for the future

Appearing as it does in the extremely performance-oriented world of MotoGP, where the world's top motorcycle racers battle for points and positions, the Safety Car must also boast appropriately impressive performance parameters. With this in mind, the engineers at BMW M Division have equipped the highperformance power unit with an innovative water injection, thus considerably increasing the engine's performance. Water injection makes it possible to raise the upper performance limits, which have otherwise been restricted thermally. As well as increasing performance and torque, the innovative system in the BMW M4 MotoGP Safety Car also ensures outstanding efficiency with benefits in terms of fullload consumption and exhaust emissions. As a BMW M product at the cutting edge of technology and innovation, the BMW M4 MotoGP Safety Car also opens up possibilities for use of this technology in future production models. 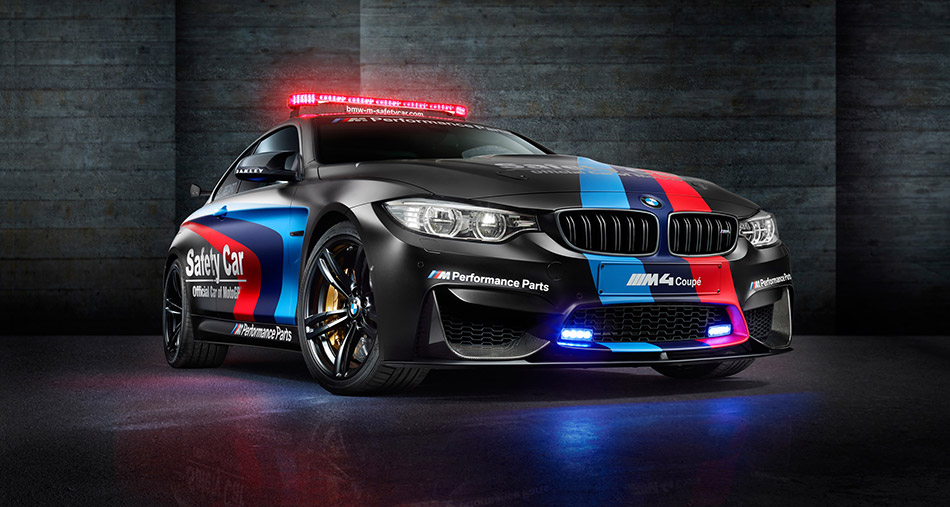 Up until now the high potential performance of the charged, six-cylinder inline engine has always placed particularly high demand on the temperature management of the engine and its auxiliaries. In order to guarantee optimal operating temperatures at all times, BMW M Division has turned to a cooling system that is as innovative as it is effective. Next to the main radiator, additional radiators also ensure balanced temperature control for the high and low temperature circuits, as well as for the gearbox and turbocharger. The exhaust air, which is heated by the turbocharger, is cooled using indirect intercooling and is supported by an additional electric water pump.

The kind of increase in performance evident in this year's BMW M4 MotoGP Safety Car also places even greater demand on the thermal qualities of the turbo engine, particularly the cooling of the supercharged air. This challenge has been overcome using the innovative water injection. As well as significantly increasing performance, the high-performance power unit also boasts outstanding fullload consumption and emission figures.

Following intense testing within the MotoGP World Championship, the water injection system will also be employed in a BMW M production model in the near future. This allows BMW M Division customers to take advantage of high-performance technology straight from the racetrack, which considerably improves performance on the streets and is ideally suited for everyday usage.

The water injection system employed by BMW M Division further optimises the performance and consumption of the charged six-cylinder, inline engine at full throttle. The engineers make use of the water's physical effect during the vaporisation process to extract the energy required from the environmental medium. Water is injected into the intake module's collector as a fine spray, thus significantly cooling the exhaust air during vaporisation. This lowers the discharge temperature in the combustion changer and thus reduces the tendency for knocking. The turbo engine can thus be operated with a higher charging pressure and an earlier ignition point.

The lower process temperatures also reduce the formation of hazardous substances, in particular nitrogen oxide (NOX). Water injection consequently dramatically improves the effectiveness of the engine. The technology increases performance and torque, whilst at the same time ensuring outstanding consumption and emission figures. As such, the improved performance can be achieved without increasing the heat applied to performance-related components, meaning the reliability of these parts is not affected.

The advantages of water injection can be used in different ways, depending on the engine and vehicle design. The engineers hereby have relatively free rein to decide to what extent they wish to optimise either the performance or the consumption of the power unit.

When a turbo engine whose turbo charger reaches its maximum speed at nominal output is fully charged, additional water injection makes it possible to increase performance and reduce consumption by about eight per cent. At the same time, losses in performance as a result of rising ambient temperatures (> 20 °C) are also compensated by increasing the amount of water being injected. And finally: instead of more performance, water injection can also be configured to reduce consumption, thus allowing more savings when fully loaded.

If water injection is taken into account when designing a high-performance engine, the turbocharger can be implemented with a suitably high degree of supercharging, whilst at the same time achieving a high compression ratio. The result is a substantial increase in performance and the reduction of consumption and emission figures when fully loaded. 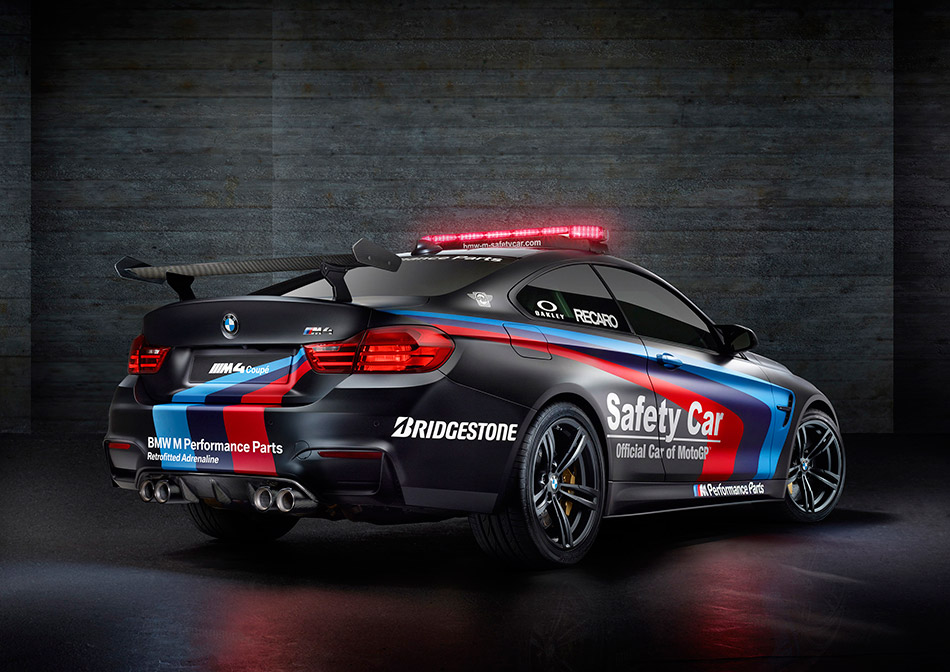 The mechanism behind water injection in detail

The performance achievable by a combustion engine is limited by various factors, including the process temperature in the combustion chamber. If this temperature is exceeded, the result is uncontrolled combustion (knocking) and thus a loss in performance and, in the worst case, expensive damage to the engine. This is particularly important when the engine is charged, as the intake air is already heated intensely in the turbocharger's supercharger. An intercooler does ensure that the temperature drops as necessary, but even that has its physical limits. Depending on design and dimensions of the cooling system and the car's aerodynamics, the intake air reaches temperatures that are just below the maximum permitted temperatures.

Increasing the supercharging pressure would exceed the knocking limit and is therefore not a viable means for increasing performance. BMW M Division has a solution: injecting a fine spray of water into the collector once more significantly reduces the temperature of the combustion air. The cooler supercharged air reduces the engine's tendency to knock, making it possible to bring the point of ignition forward and thus closer to the optimum value. This makes the combustion process more effective, whilst at the same time reducing the combustion temperature. On the other hand, cool air has a higher density which increases the oxygen content in the combustion chamber. This results in a higher mean pressure during the combustion process and in turn optimises performance and torque. Finally, the effective internal cooling of the combustion chamber reduces the thermal strain on numerous performance-related components. This not only prevents damage to pistons, exhaust valves and catalytic converters, but also reduces the strain on the turbocharger, which is subjected to lower exhaust temperatures.

Resolving a conflict of objectives

Using water injection to increase the knocking limit also helps to largely resolve a familiar conflict in objectives when designing powerful engines. Performance and consumption are not least determined by the compression ratio. This also applies, in particular, to highly charged turbo engines like the BMW M TwinPower Turbo, inline six-cylinder. Thanks to a high compression ratio, this engine is highly efficient and boasts low consumption figures, especially in the partial load range. However, the maximum compression ratio is limited by the knocking tendency when fully loaded. Water injection is also hugely beneficial here, as it reduces the tendency for the engine to knock, whilst at the same time increasing the compression ratio. This way, the turbo engine can achieve optimal performance across a wide range of operating points: the potential of the technology increases more, the lower the octane rating of the fuel used. As fuel with ROZ 98 is not available everywhere in the world, water injection helps achieve optimal performance and consumption from an engine with Super E10 (ROZ 95).

Implementing the technology in the BMW M4 motogp safety car

When positioning the water injection, the engineers at BMW M Division opted for a layout with three injection valves in the plenum chamber, each supplying two cylinders of the six-cylinder, inline engine. This solution ensures very equal distribution and also allows the system to be designed in a compact manner.

Located in the boot of the BMW M4 MotoGP Safety Car is a water tank with a gross volume of about five litres, which houses the water pump, sensors and valves. The pump and complete system of sensors and actuating elements are controlled by the engine electronics, which have been upgraded accordingly. In practice, the pump feeds the water to the injectors at a pressure of ten bar, whereby the appropriate volume is supplied depending on load, engine speed and temperature. This ensures that water consumption is kept to an absolute minimum. In rigorous action out on the racetrack, it is always necessary to refill the water supply whenever the car must refuel. During standard operation, the intervals between water refills are considerably longer, depending on the driving style. Even when driving faster on the motorway, it is only necessary to refill the water container roughly every five stops for refuelling. To ensure the system is as suitable as possible for daily use, it does not require any additional maintenance. 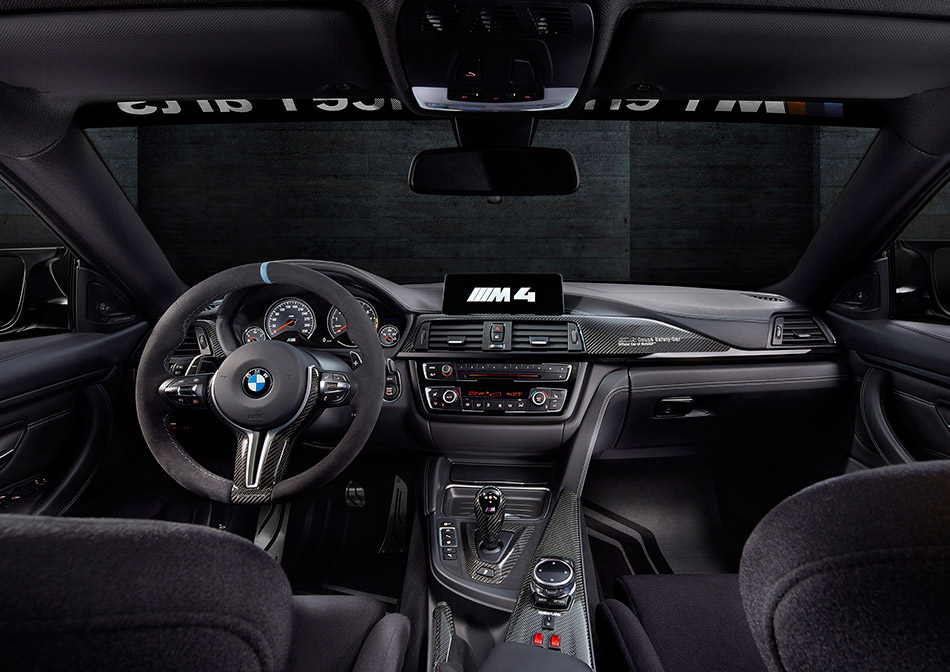 For safety reasons, the BMW M water injection works with a sophisticated automatic diagnosis. Should the water tank be empty or parts of the system fail, appropriate measures will be taken to protect the power unit. Supercharging pressure and ignition point are cancelled, thus enabling continued operation of the engine without any restrictions other than reduced performance. However, a wide range of measures also ensures the functionality of the system during normal operation. After the engine has been turned off, the water is transported back from the pipeline into the tank, in order to prevent the system components freezing in minus temperatures. The water tank itself is also frost-proof.

Technology transfer from the racetrack to the street

With water injection, BMW M Division is once again underlining its many years of motorsport experience and expertise when it comes to developing powerful drive trains. The letter "M" is not only synonymous with success on the racetrack, but also with uncompromising high-performance, street-legal sports cars. The BMW M4 MotoGP Safety Car allows BMW M Division to underline its innovative prowess and to follow the brand's philosophy of bringing motorsport technology to the streets. At the same time, the model also offers a clear perspective of an M car that will set a new benchmark in terms of performance, exclusivity and individuality. As well as greater performance coupled with outstanding consumption and emission figures, customers will also benefit from an innovative water injection system with benefits both on the racetrack and in everyday use.