Audi has spared no effort in revising the A7 Sportback*. The spacious five-door coupe is now even more powerful and attractive – thanks to new engine configurations, new transmissions, new headlights, taillights and new infotainment systems. The new A7 Sportback combines the emotional appeal and sportiness of a coupe with the comfort of a sedan and the functional benefits of an Avant.

* The collective fuel consumption of all models named above and available on the German market can be found in the list provided at the end of this MediaInfo.

Back when the A7 Sportback first debuted in 2010, Audi was already setting new standards in automotive design, embracing an athletic aesthetic and elegance in grand style. Its long engine hood, sporty, flowing C‑pillars and the sharply dropping rear end create a dynamic overall impression. The revised version of the five-door model, measuring 4.97 meters (16.3 ft) in length, now has additional striking, sporty features.

The most striking changes are to the Singleframe grille, bumpers, tailpipes and headlights. LED technology is now standard; upon request, Audi can supply Matrix LED headlights, which light the road optimally without causing glare for other road users. Combined with the Matrix LED headlights, dynamic turn signals are also installed at the front; they come standard at the rear. 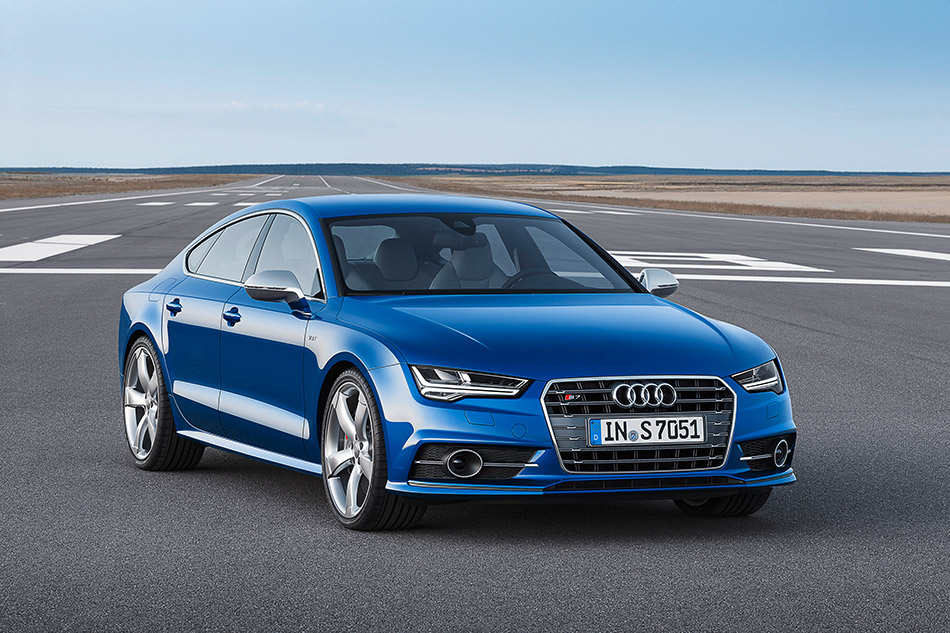 The body of the new Audi A7 Sportback consists primarily of aluminum and high‑tech steel grades. It is extraordinarily lightweight and designed for maximum comfort in terms of noise. The cargo space under the long, electrically driven trunk lid has a base capacity of 535 liters (18.9 cu ft). When the rear seat backs are folded down it grows to 1,390 liters (49.1 cu ft).

The sporty style of the exterior is echoed in the car's interior. The dominant element is the horizontal line surrounding the driver and passenger. The dashboard gives an impression of lightness and elegance. The new interior materials, including the aluminum/Beaufort walnut inlay and Valcona leather, are impressive for their finish. The color palette has been redesigned, offering five color options even for the seats.

The new Audi A7 Sportback is confident and relaxed to drive. The front seats can be optionally equipped with ventilation and massage functions, and there are four seat versions to choose from. The MMI radio operating system comes standard; it can be supplemented as an option with a head‑up display that projects all important information onto the windshield.

The 3.0 TDI biturbo clean diesel, which delivers 235 kW (320 hp), works with an eight‑speed tiptronic transmission; all other engine configurations have a seven‑speed S tronic transmission. In the versions with front‑wheel drive, the dual‑clutch transmission has been fully redeveloped, replacing the multitronic. In engine configurations starting at 200 kW (272 hp), quattro permanent all-wheel drive can be supplemented with the sport differential, which actively distributes power between the rear wheels.

The chassis, too, combines sporty precision with high comfort. The new Audi A7 Sportback features wheels with diameters ranging from 17 to 21 inches. Some engine configurations are equipped with new lightweight brakes. The power steering system features an electromechanical drive for high efficiency.

The new Audi A7 Sportback leads the competition in terms of infotainment. The top system, MMI Navigation plus with MMI touch, utilizes the latest generation of the modular infotainment system; its highlight is a powerful graphics processor from Audi's partner Nvidia. Touchpad control lets the driver scroll and zoom in lists and maps.

The perfect supplement to MMI Navigation plus is Audi connect, which links the five‑door coupe with the Internet via the LTE high‑speed data transmission standard. The Audi phone box connects the driver's cell phone to the car antenna for improved reception. The top of the hi-fi line is the Bang & Olufsen Advanced Sound System.

The new Audi A7 Sportback will begin arriving at dealerships in late summer 2014. Its base price in Germany will be €51,300. The Audi S7 Sportback is available starting at €82,300.

Fuel consumption of the models named above: