Chevrolet today introduced the 2015 Tahoe and Suburban – all-new versions of the industry's best-selling duo of full-size SUVs. They offer more functionality, greater refinement, new safety features and an increased range of advanced technologies to appeal to two distinct customer groups who want the unique combination of features only Tahoe and Suburban provide.

"There are several new features and enhancements at the core of the all-new 2015 Suburban and Tahoe that will extend the legacy Chevrolet has built as the segment leader," said Tim Mahoney, Chevrolet global chief marketing officer. "Customers will experience greater refinement, efficiency and safety with the same capability that has made Chevrolet the go-to brand for full-size SUVs." 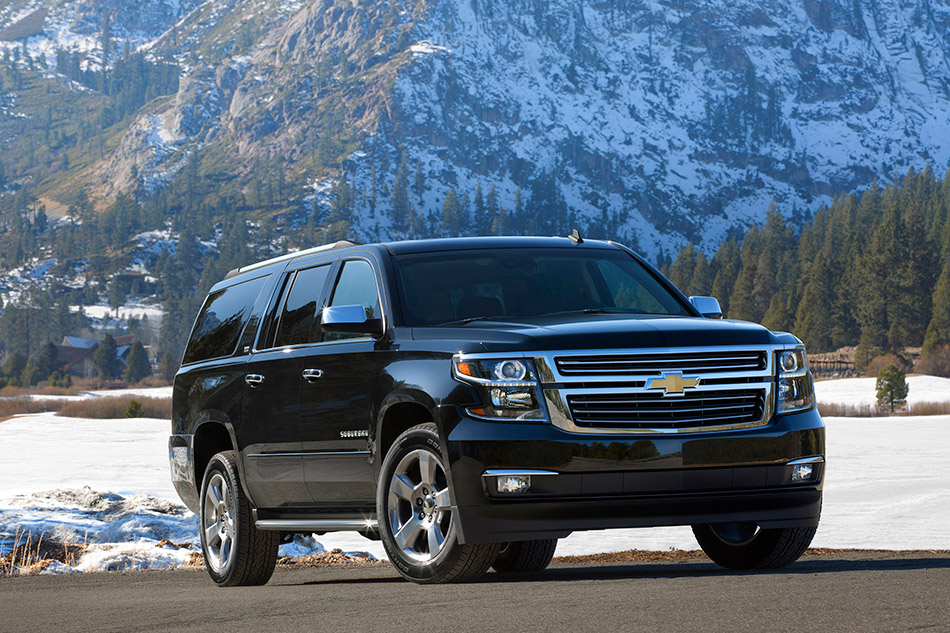 With more than 117,000 sold in 2012 and sales up more than 16 percent for the first six months of 2013 over last year. Chevrolet's full-size SUVs continue to play an important role in the brand's success and General Motors' profitability. Introduced in 1935, the Suburban is the segment's founder and the industry's oldest continuously available nameplate, while Tahoe is the segment's sales leader.

"The Chevrolet Tahoe and Suburban will continue to be dominant forces in the marketplace and provide great value for our customers, Chevrolet and General Motors," said Dan Ammann, GM executive vice president and CFO. "This is an important and profitable segment and we have set the bar high to ensure we provide our customers with great quality and performance they expect and deserve."

The all-new 2015 Suburban represents the 80th anniversary and 12th generation of the original SUV. This generation has been designed for today's active families needing space for everyone and everything. Suburban continues to offer legendary roominess, unmatched functionality, connectivity and first-class amenities.

New functionality and technology features found on both vehicles for 2015 include:

Both vehicles also offer the segment's only front-seat center air bag (bucket-seat models), which is engineered to provide additional protection for drivers and front passengers in far-side impact crashes, where the affected occupant is on the opposite, non-struck side of the vehicle.

Chevrolet's full-size SUVs have also been designed with greater security features to thwart theft attempts, including available window break in or glass-break, vertical-movement and interior movement sensors. Along with triggering the vehicles' alarm systems, some of the features shut down key control systems to make it almost impossible to start or move them.

The exterior designs of the 2015 Tahoe and Suburban are more refined and precisely sculpted. Not a single exterior sheet metal panel or lighting element is shared with Chevrolet's full-size pick-ups.

New inlaid doors fit into the body side openings instead of over the top of the body, significantly improving the quietness of the interior cabin and contributing to improved aerodynamics – an attribute that helps the vehicles slip through the air on the highway with less drag for greater efficiency. Lightweight aluminum hood and lift gate panels also enhance efficiency through reduced overall mass.

Projector-beam headlamps flank the Chevrolet-signature dual-port grille – chrome on all models – and sweep into the front fenders. high-intensity discharge headlamps and light-emitting diode daytime running lamps are included on the up level LTZ model.

Inside, premium materials and enhanced ergonomics demonstrate the Tahoe and Suburban's blend of sophistication, craftsmanship and function. A new instrument panel houses an available eight-inch color touch screen radio with a secured storage bin behind the motorized screen. The compartmentalized center console is large enough to store a laptop or iPad.

The 2015 Tahoe and Suburban are engineered to deliver the customer a quieter, more-controlled ride and improved steering and braking feel. It all starts on a stronger, fully boxed, perimeter frame, which supports payload and trailering capability that body-frame-integral crossovers and SUVs can't match. The all-new Tahoe will offer today's customers the capability of a truck and the amenities of a luxury vehicle.

The driving experience of the new SUVs is further enhanced with:

Tahoe and Suburban's standard 5.3L V-8 feature state-of-the-art technologies, including direct injection, cylinder deactivation, continuously variable valve timing and an advanced combustion system, designed to make the most of power, torque and efficiency across a broad range of operating conditions.

The new Tahoe and Suburban will be built at GM's Arlington, Texas assembly plant. Both vehicles are scheduled to arrive in dealerships in the first quarter of 2014.