At the New York International Auto Show today, Chevrolet announced it will add the Trax, a new small SUV, to its portfolio. The 2015 Trax will offer versatility, connectivity and turbocharged performance in an efficient package.

Sporty and modern, Trax blends small-car agility with the utility of an SUV, including up to 48.4 cubic feet (1,371 liters) of cargo space. It's Chevrolet's seventh small-vehicle launch in less than four years. During that time, the brand's share of the small-, compact- and mini-car segments has more than tripled – up 221 percent.

"Trax offers customers another option in the Chevrolet family and will be a strong competitor in the emerging small-SUV market, which is expected to grow more than 80 percent by 2016," said Alan Batey, General Motors senior vice president, Global Chevrolet. "Trax also leverages our global resources and builds on Chevrolet's strong SUV heritage." 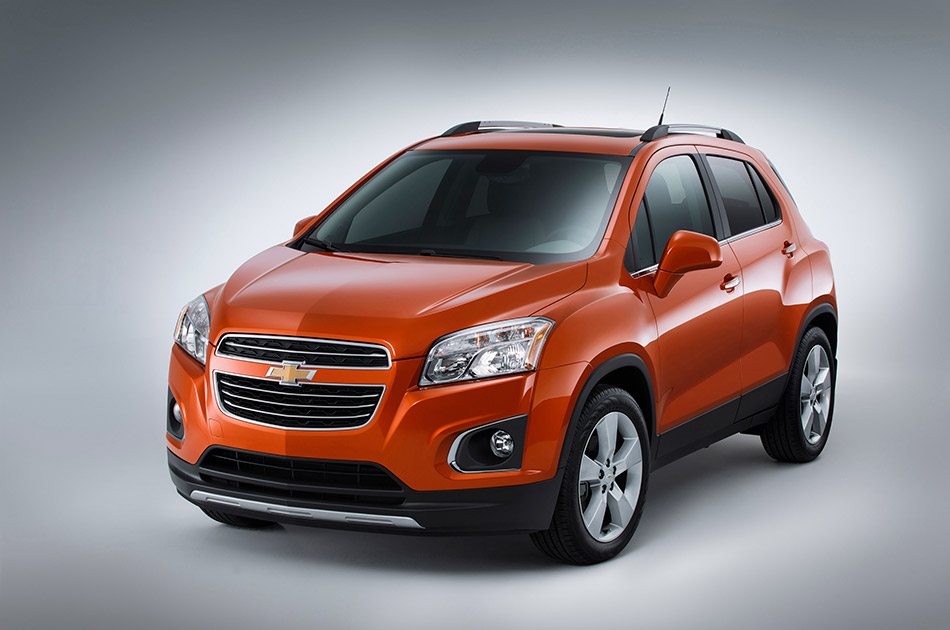 When it arrives in dealer showrooms early next year, Trax will accommodate customers' increasingly connected lifestyles with available OnStar 4G LTE and built-in Wi-Fi hotspot, as well as MyLink technology featuring the segment's only seven-inch color touch screen. Trax also will be the first in its class to offer Siri Eyes Free.

Trax will be offered in LS, LT and LTZ trims. Pricing will be announced closer to the start of production.

A Chevy inside and out

With its signature dual-port grille, prominent bowtie emblem and swept headlamps, the Trax is immediately identifiable as a contemporary Chevrolet. Its grille design – with chrome accents – emulates other Chevrolets and provides a more cohesive appearance across the brand's lineup of crossovers and small cars.

Available cues such as front fog lamps and simulated front and rear skid plates lend a sportier presence, while vertical tail lamps flank the tailgate, accenting taught body lines and pronounced wheel arches that give the Trax a confident stance.

Inside, Trax's distinctive styling carries over to a dual-cockpit instrument panel. In the center, it houses a seven-inch, high-resolution, full-color display for the standard MyLink voice-activated infotainment system. It also features displays for available SiriusXM satellite radio and standard rearview camera, as well as the available GPS-enabled app navigation system that customers can download.

The instrument cluster is inspired by the bold design in the Sonic, featuring a large, performance-style analog tachometer combined with a prominent digital display for the speedometer and other readouts. A small-diameter, thick-rimmed steering wheel enhances the sporty ambience. The wheel is leather-wrapped on LTZ and some LT models.

For versatility, the 60/40 flat-folding rear seat features a fold-down armrest with cup holders, storage in all four doors, four bins in the dash, pockets in the seatbacks and bins under the rear load floor and a hidden storage drawer under the front passenger seat. It also offers 18.7 cubic feet (530 liters) of storage behind the split-folding rear seat and 48.4 cubic feet (1,371 liters) with the rear seat folded. The front passenger seat also folds flat to extend the cargo length and accommodate items up to eight feet long.

Available Siri Eyes Free for iPhone iOS 6 and iOS 7 users enhances connectivity and convenience. Each enables voice-controlled connectivity so customers can keep phones stored and their hands on the wheel. 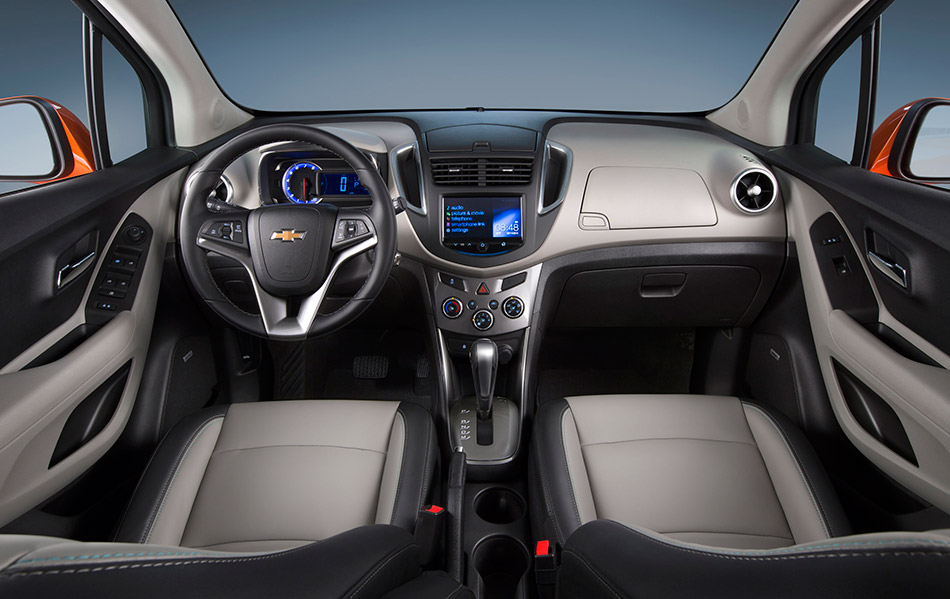 Trax is powered by a power-dense Ecotec 1.4L turbocharged four-cylinder engine backed by an efficiency-enhancing six-speed automatic transmission. The engine is expected to be rated at an SAE-certified 138 horsepower (102 kW) and 148 lb-ft of torque (200 Nm) between 1,850 and 4,900 rpm.

The wide rpm range for the maximum torque – a specific trait of turbocharged engines – helps it deliver a more confident driving experience, with a strong feeling of power across the rpm band. The turbocharger's on-demand performance also contributes to efficiency because it enables greater power when needed with the lower fuel consumption of a small-displacement engine when it's not.

The turbocharger is integrated within the exhaust manifold, for reduced weight and greater packaging flexibility. A solid cast crankshaft and forged connecting rods deliver additional durability to support the engine's pressurized power and torque.

A Hydra-Matic 6T40 six-speed automatic transmission with TAPShift control is matched with the 1.4L turbo engine. It has a unique design, with the planetary gearsets positioned on the same axis as the engine crankshaft centerline, making the entire powertrain unit shorter fore-to-aft. This design enables a shorter overall vehicle length, increased interior space, enhanced safety crush zones and lower weight.

A "steep" first gear and a "tall" overdrive top gear to achieve a wide ratio spread of 6.14:1. This allows Trax to achieve robust acceleration, as well as fuel efficiency and lower engine noise at highway cruising speeds.

Trax is built on a robust global platform and engineered with precise suspension tuning to deliver one of the segment's quietest and most refined driving experiences. Available all-wheel drive seamlessly shifts power to the rear wheels when required for better traction and handling.

The body structure forms a protective cage around the passenger compartment, with 66 percent of the structure composed of high-strength steels, including ultra-high-strength steel. That structural protection is complemented with 10 standard air bags: