At the Beijing Motor Show, DS will be presenting the DS 5LS R concept car, an all-new and unique version of the DS 5LS that showcases all the attributes of the production model, chief among them power and top-quality materials. Following on from the DS3 Cabrio Racing and DS4 Racing concept cars, the DS 5LS R highlights DS expertise though a blend of top-level performance and luxury fully in step with the DS spirit.

The DS 5LS R concept car, making its debut at the Beijing Motor Show, showcases the DS 5LS launched recently in China. The DS 5LS stands out with its powerful body styling, featuring the sculptural and prestigious "DS Wings" grille fit on new DS models. The DS 5LS R emphasises the athletic character of the DS 5LS, highlighting the voluptuous curves of the production model. 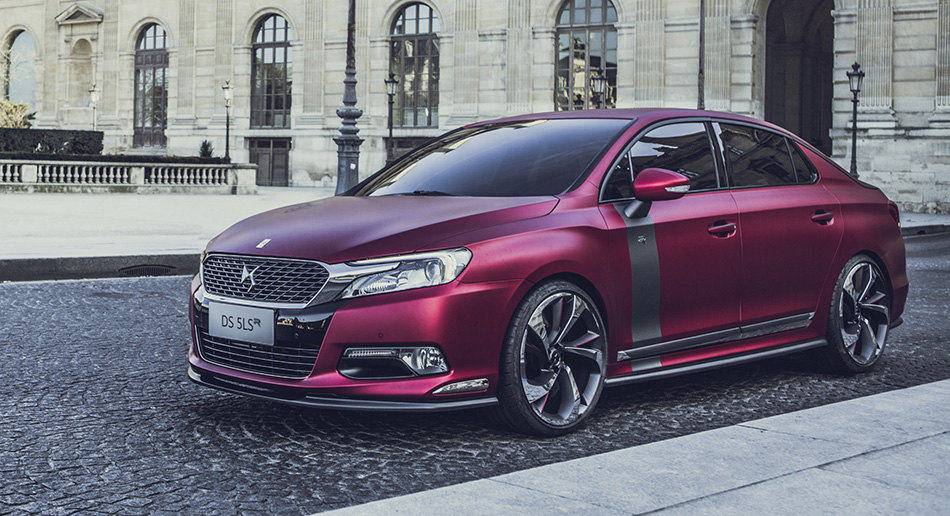 In a nod to the Brand's WRC commitment with the DS3 Racing, the sportiness of the DS 5LS R is underpinned above all by a 1.6-litre turbo engine that develops 300 bhp and torque of 400 Nm. The chassis is 15 mm lower than the production model's and the concept car boasts wider front tracks. It is equipped with a sequential gearbox controlled by steering-wheel paddles. High-precision development work also went in to the chassis, brakes and suspension, while the focus on performance is visually underscored by components including an air vent, a bumper panel and a lower body panel in real carbon.

Faithful to the DS spirit of innovation and the search for the finest materials, the DS 5LS R makes a spectacular first impression with its anodised carmine red paint with a matte and metallic finish that sublimates the concept car's sporty body styling. Wide side strips in matte carbon grey on the front doors underline the concept car's belonging to the "R" range of sports cars, alongside the DS3 Cabrio Racing. The "R" signature features above the grille, at the rear and on the side of the car.

A true concentrate of technology, the DS 5LS R is fit with real carbon components including the side signature that extends from the windows to the boot, cutting through the quarter panel with a subtly drawn shark fin. The DS Wings grille is in carbon grey. The athletic nature of the beast is emphasised by the 20-inch wheels, cut from the block, sculpturally designed and carbon-coloured to match the polished aluminium on the exterior and the touches of carmine red.

The focus inside the DS 5LS R is squarely on luxury, with exceptional materials. The cabin is fully lined with leather and alcantara, including on the dashboard and steering wheel. The DS identity is omnipresent, with a fresh, three-fabric take on the watchstrap upholstery combining aniline full-grain leather, DS-embossed leather and alcantara. The seats, dashboard, upper door panels and central armrest are finished with pearl top-stitching in carmine red using a technique that testifies to the expertise of DS, inspired by the finest in French luxury goods.

The idea of performance plays a central role in the DS 5LS R cabin, as seen in the chronometer on the central console and the steering wheel with its carmine red centre and "R" signature. And for an extra dose of athleticism, the interior includes real carbon touches, on the steering wheel, door panels and door handles, together with carmine red inserts in the air vents.