DMC has quickly become one of the most famous Lamborghini tuners on the market these days, their initial MV or Molto Veloce kit for the V12 flagship Aventador has been installed nearly 50 times already and the next evolution called Spezial Version ... or SV was a limited production version that would only be made 10 times ... and a Lamborghini Aventador owner just couldn't order this latter kit like that.

In fact DMC screens the customer before he (or she) is even able to obtain the Spezial Version kit ... first rule is the customer already has to have the Molto Veloce kit installed on his Lamborghini Aventador before he can apply to have the SV evolution mounted. DMC actually wants to avoid installing this impressive Spezial Version on two cars that are similar, or even in the same part of the world ... not a single one of the 10 DMC Aventador SV will look the same. One lucky customer that was able to obtain the highly limited DMC Spezial Version aerodynamic kit did surprise everybody ... the complete kit was installed on a bright orange metallic Lamborghini Aventador LP700-4 Roadster! 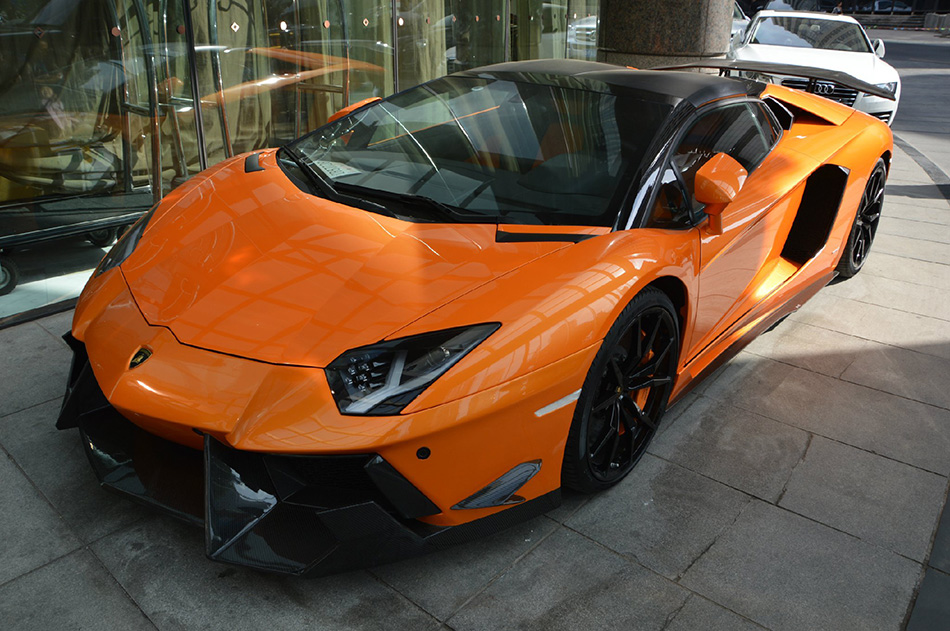 This one rules them all ... the first DMC Aventador Roadster SV in the world is now a reality, and it has been installed on a very nicely spec'd out Lamborghini. Finished in the rather expensive option of pearl metallic Arancio Argos over a two tone Bicolor Sportivo interior combining Nero Ade with Arancio Dryope the owner also opted for the beautiful Dione wheels in 20 and 21 inch to the front and rear respectively covering orange brake calipers ... to have an helping hand parking this stunning exotic the owner also had the front and rear parking sensors installed together with the rear view camera.

And just when the owner took delivery on one of the most desirable super cars in the world today ... the Bull was taken to the next level with a complete DMC Spezial Version aerodynamic package including the impressive carbon fiber front bumper with upright fins on either side ... it did get color coded with the rest of the car having only the lower section, air intakes and vertical fins clear coated over the original carbon fiber ... on the side of this new DMC SV bumper we also recognize the horizontal 'V' shaped canards.

The clear carbon fiber DMC side sills are mounted underneath the original Aventador units while a more dramatic operation was executed at the rear ... the entire rear section including lower diffuser, bumper and rear facia between the air vents up to the taillights has been removed together with the original, adjustable rear wing found on the Aventador ... in their place we now find clear carbon fiber parts from DMC including the stunning SV style rear wing ... riding high and proud on this Raging Bull.

Some might argue the only Aventador SV should be done by Lamborghini themselves ... but we really like this orange metallic Aventador Roadster Spezial Version by DMC ... personally would go for a Bianco Canopus one with the clear carbon fiber parts, but that's my personal taste ... and let's face it, even buying an Aventador is a personal choice, having it turned into a DMC Spezial Version is the ultimate 'fearless' option ... owning the first DMC Aventador Roadster SV must be the best feeling in the world.