The purpose-built, non-street legal and competition-ready SRT Viper GTS-R also was revealed as part of the Chrysler Group's announcement that a factory-backed SRT Viper Racing team will return to the American Le Mans Series (ALMS) in 2012.

"Racing has been a significant part of the illustrious history of Viper not only with wins on the track, but also in the continued development of the street cars - and our new 2013 SRT Viper models are proof of those lessons learned," said Ralph Gilles, President and CEO - Street and Racing Technology Brand and Motorsports, Chrysler Group LLC. "Now with our new team and the launch of the GTS-R, we're excited and proud to begin writing more chapters in the racing history of the Viper later this summer." 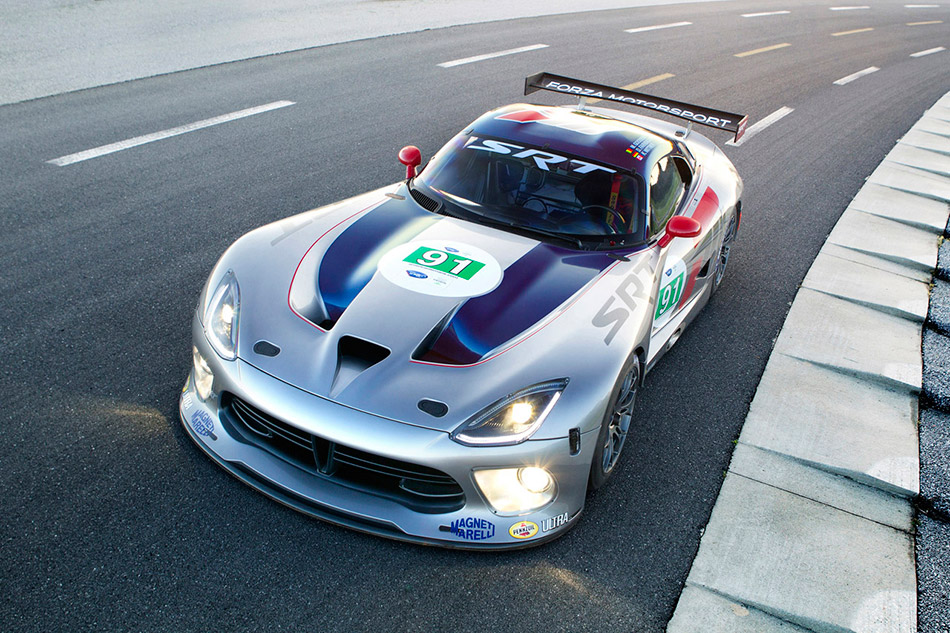 SRT Motorsports has partnered with Riley Technologies, based in Mooresville, N.C., on the design-and-build process of the new SRT Viper GTS-R.

Two identical SRT Viper GTS-Rs will compete in the production-based GT class in the series. Four drivers currently are signed to drive including Dominik Farnbacher, from Ansbach, Germany; Marc Goossens from Geel, Belgium; Ryan Hunter-Reay from Dallas and Kuno Wittmer from Montreal. Additional driver and team announcements will be forthcoming.

Both Viper GTS-Rs will race on the proven Michelin GT tires extending the successful technical partnership.

Scott Atherton, President and CEO of the American Le Mans Series, hails the SRT Viper's return to the Series as one of 2012's top announcements.

"I don't think it's possible to overstate the significance of the SRT Viper returning to the top level of professional sports car racing," Atherton said. "The Chrysler Group has a long, storied and very successful history of competing with the American Le Mans Series. The fact that they're coming back concurrently with the introduction of the new production car and doing it simultaneously, we would be hard-pressed to come up with a better-case scenario. What a great way for SRT Viper to come back to racing."

All ALMS teams compete in the prestigious MICHELIN GREEN X Challenge. Entering its fourth season, the program objectively ranks the competing cars in terms of their environmental footprint, their energy efficiency and speed on the racetrack. A separate, season-long award is given by the U.S. Department of Energy, the U.S. Environmental Protection Agency and SAE International, acknowledging the vehicle manufacturer and its technology contribution to improving efficiency and reducing environmental impacts of racing. The scoring system for the program was developed by series officials and the U.S. Department of Energy, and it is based on a combination of on-track performance and energy consumption. The LMP and GT teams that win MICHELIN GREEN X Challenge championship will earn an entry to the 2013 24 Hours of Le Mans.

"We often say it's clean, fast and efficient," Bob Larsen, president of Obotech and a contractor for the U.S. Department of Energy, said. "There's a lot of science that goes into the actual scoring, a very thorough and technically rigorous way to factor in the environmental footprint. We look at each car's average speed and the distance that they travel and we adjust their amount of fuel that they would have had to burn in order to go as fast and as far as the leader, and that gives us an equitable basis for comparing the performance of the vehicles."

The Viper has enjoyed a successful racing heritage that began in 1996 with the first Dodge Viper racing entry, the original GTS-R, which earned five international GT championships and the 1997-1999 FIA GT championships. It also posted an amazing overall win at the Rolex 24 Hours of Daytona in 2000 - the first for a production-based American car.

The Dodge Viper Competition Coupe, introduced in 2003, delivered the next chapter of that history with its coupe-shaped carbon/Kevlar body and a track-ready chassis, based on the Dodge Viper SRT10. The Viper Competition Coupe continued the on-track prowess by capturing the 2004 SCCA Speed World Challenge GT title, championships in Formula D Drifting series in 2004 and 2006 and the British GT Championship in 2007 and 2008.