The next chapter in the history of the ultimate street-legal, track-focused, hand-built American supercar begins with the return of the new 2016 Dodge Viper ACR.

Certified for public roads and engineered to wring every last hundredth of a second out of road course lap times, the 2016 Dodge Viper ACR combines the latest in aerodynamic, braking and tire technology – a recipe designed to carry on the ACR's lap-time busting reputation that has made it a legend on race tracks around the world.

"The Viper has always been more of a street-legal race car than a track-capable streetcar, and the new 2016 Dodge Viper ACR is the fastest street-legal Viper track car ever," said Tim Kuniskis, President and Chief Executive Officer – Dodge Brand and SRT Brand, FCA – North America. "Our goal is to arm our enthusiasts with the ultimate Viper track car to dominate road courses around the world." The SRT engineering team that developed the 2016 Dodge Viper ACR is well-stocked with members who race their own cars, as well as learning from the factory-based racing Viper GTS-R that competed in the American Le Mans Series and IMSA United SportsCar Championship from 2012-2014, capturing the GTLM class driver and team championships in 2014. For the new Viper ACR, the team focused its efforts on three areas: aerodynamics, chassis and tires to maximize grip, producing never-seen-before handling capabilities and unprecedented lap times.

The 2016 Dodge Viper ACR with the available Extreme Aero package produces the highest aerodynamic downforce of any production car. During on-track testing, development engineers have experienced nearly 1 ton of downforce at top speed of 177 mph.

The new Carbon Ceramic Matrix brakes have the largest brake pad area ever on Viper. The brakes work in conjunction with ABS and ESC specifically tuned for ACR to take into account the extra grip provided by the additional aero and specifically designed Kumho® tires. Detachable front brake ducts provide additional cooling to the brake calipers for optimum track performance.

The 2016 Dodge Viper ACR is fitted with Kumho® Ecsta V720 high-performance tires designed specifically for the car with unique tread pattern and compounds for front and rear. In testing, the new tires produce laps times that are 1.5 seconds faster than off-road only race tires.

Low-profile front tires measure 295/25/19 and are mounted on wider 11-inch wide wheels and when combined with the 355/30/19 rear tires provide the largest combined tire patch available on any production car. On the sidewall of the new tires is a unique raised ACR logo. 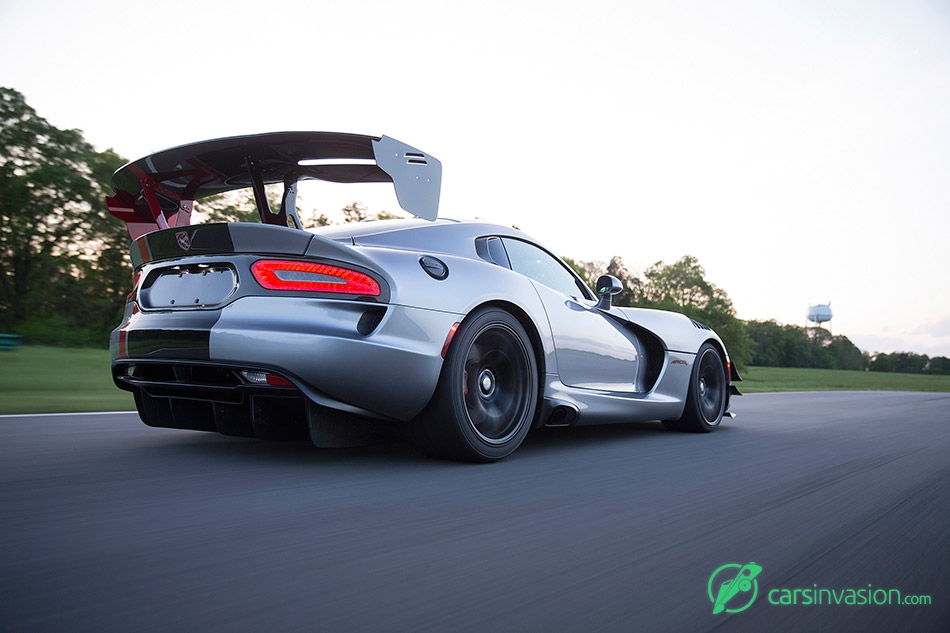 Front springs are rated at 600 lbs./in. and rear springs at 1,300 lbs./in., more than double the suspension stiffness of the Viper TA model. With unique race alignment and 1.4 degrees more negative camber than the entry SRT model, the 2016 Dodge Viper ACR is capable of sustaining more than 1.5 g on high-speed turns due to the combined chassis and aerodynamic improvements.

"This car is not a 1-3 lap track special. You can run the car at the track all day, and the performance doesn't fall off," added Kuniskis.

At the heart of the 2016 Viper ACR is the handcrafted, all-aluminum 8.4-liter V-10 overhead-valve engine, rated at 645 horsepower and 600 lb.-ft. of torque – the most torque of any naturally aspirated sports-car engine in the world. Unique exhaust tips have been added to the side-mounted exhaust pipes to provide reduced exhaust pressure. All Vipers are engineered to withstand severe track duty in ambient temperatures of 100 degrees Fahrenheit with a professional driver. Power reaches the pavement through the standard Tremec TR6060 six-speed manual transmission.

Applying Viper's exclusive ‘1 of 1' customization program to Viper ACR allows customers to have more than 25 million build combinations to create their one-of-a-kind Snake from the ground up. With 8,000 exterior color options, 24,000 custom stripe colors, 11 wheel options, 16 interior trims and seven aero packages, three brake packages and four suspension options there are more than 25 million ways for buyers to customize their one-of-a-kind Dodge Viper.

Hand-built in Detroit at the Conner Avenue Assembly Plant; the 2016 Dodge Viper ACR goes on sale in third quarter 2015.

The original Dodge Viper ACR was produced for the 1999 model year and was based off of the second generation coupe. This model had suspension and engine enhancements focused on maximizing performance in road racing and autocross environments. Horsepower was bumped from 450 to 460 hp via a unique air filter and smooth air intake hoses. Curb weight was reduced by more than 50 pounds by stripping the audio system and removing other non-essential items such as the fog lamps. The new stiffer, adjustable suspension removed another 14 pounds. This model also had an "ACR" badge and 20-spoke BBS wheels.

The second version of the Viper ACR was based off of the fourth generation coupe and was built during the 2008-2010 model years.

The 2008/2009 Viper ACR maintained the standard Viper's 600 hp and 560 lbs.-ft. of torque, while adding aerodynamic, brake and suspension upgrades to the already potent supercar. One development goal was 1,000 pounds of downforce at 150 mph with optimum aero balance – a target achieved through CFD and wind-tunnel testing. Unique coil-over shocks allowed height changes and were step adjustable for compression and rebound.

Spring and anti-roll-bar rates were increased and the ACR was fitted with forged aluminum wheels and track-ready race tires. The new wheels and tires combined with a new two-piece brake rotor system shaved approximately 40 pounds from a base Viper. An additional 40 pound savings (for a total of 80) was possible when ordering the Hard Core Package which removed the audio system, trunk carpet and sound insulation. The 2008 Viper ACR proved its ultimate performance formula by setting a new track record at the famous 12.9-mile Nürburgring Nordschleife circuit in Germany with an elapsed time of 7:22.1. 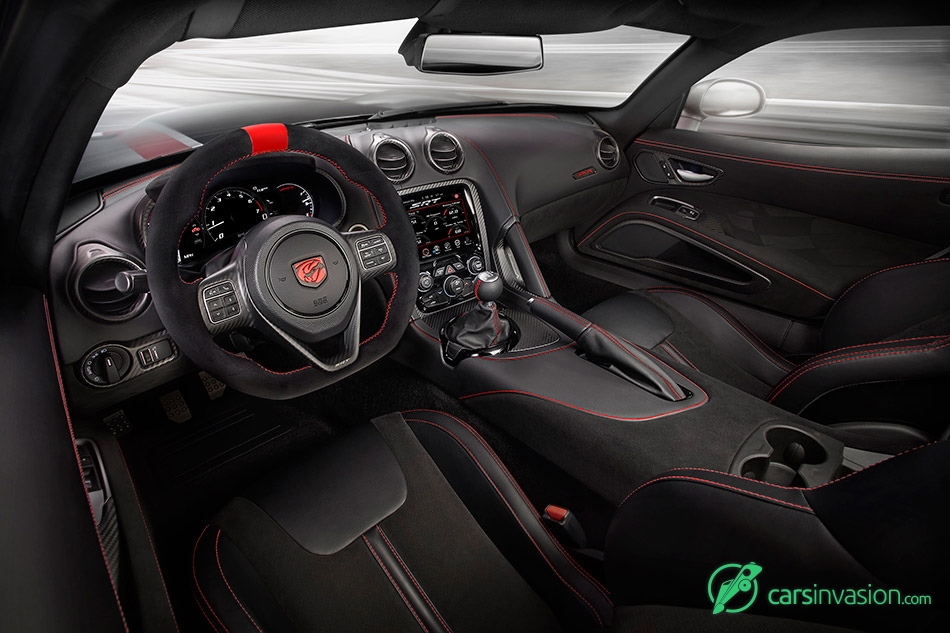 For the 2010 model year, the Viper ACR was upgraded further with a redesigned rear wing gurney and end plates to further optimize aerodynamics and improve rear yaw downforce. In addition, a shorter fifth gear ratio improved high-speed acceleration and produced higher straightaway speeds. This improvement was a direct result of SRT's experience at the Nürburgring Nordschleife where the team found that a revised gear ratio would have resulted in a higher speed capability and potentially a shorter elapsed time. In late September 2011, Dodge returned to the famed circuit and recaptured the production car lap record with a time of 7:12.13.

Combining the best performance attributes of the record-setting, street-legal Dodge Viper ACR and the safety equipment of championship-winning Viper Competition Coupe, Dodge produced the non-street legal racer that made its on-track debut in the summer of 2010 as part of Dodge Viper Cup spec racing series.

The 2010 Dodge Viper ACR-X was also powered by a 8.4-liter V10, equipped with factory-installed headers, forged pistons and a low-restriction exhaust system that produced 640 horsepower (40 more than production model).

The suspension also was tuned and upgraded specifically for on-track usage, while the weight was lightened by a full 160 pounds (versus the standard production Viper) to take on even the most challenging road course. Additional aerodynamic upgrades improved downforce, while enhancing stability and significantly improving grip in high-speed cornering.