The Ford R5's unique adaptive four wheel drive system was developed specifically for the show car. It powers all wheels on a full-time basis. An electronic management system distributes power to each of the four wheels as required. In normal conditions the power is split 60/40 between the rear and front wheels respectively.

The Ford R5 is based upon a Falcon ute platform, the cabin has been stretched rearward from the B-pillar with a shortened ute tub mounted behind the cabin. Entry to the cabin is via standard forward doors and unique rear opposed doors and is assisted by the deletion of the 'B-pillar'.

Finished in a new 'Uluru Sunset' paint scheme the R5 'morphs' from yellow to purple, depending upon the light. 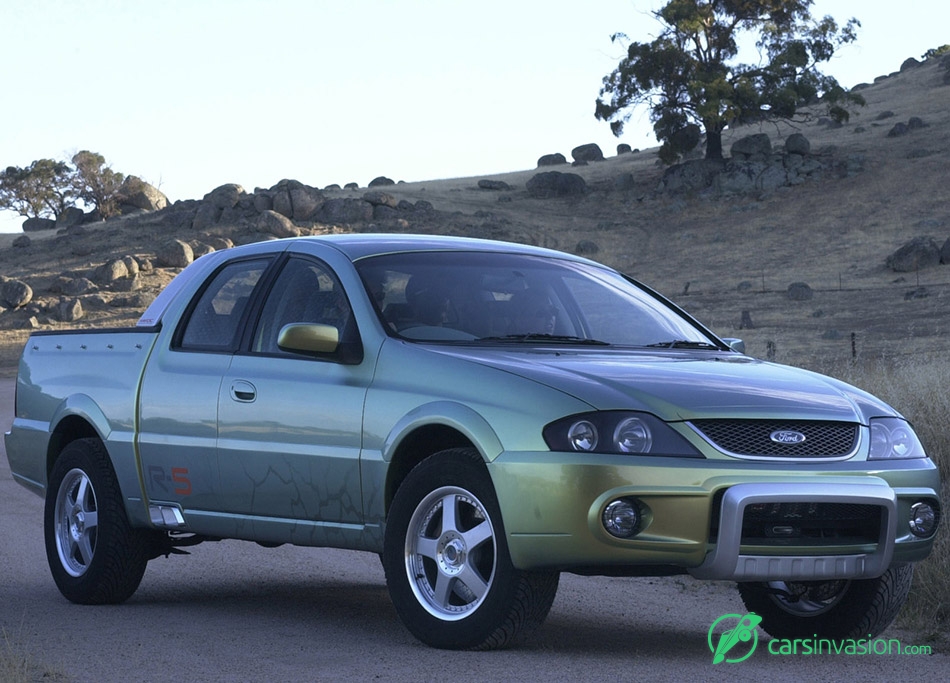 The Ford R5's athletic stance has been given a rugged edge with a substantial increase in ride height (70mm more than the 4x2 R5), high mount driving lights and a subtle nudge bar.

The deeply sculptured front bumper, wheel arch flares, integrated sideskirts and 17" wheels combine to provide a purposeful appearance. The R5 has around 150mm greater clearance than a conventional Falcon ute.

A 1-tonne electric winch has been cleverly concealed behind a mesh insert in the lower intake area of the front bumper a nudge bar is mounted around the winch.

Twin sideport exhaust outlets are located in front of the rear wheel arches on each side of the car.

An integrated sports bar is mounted on the tub behind the cabin with several Hella 'Comet FF100' high output lights mounted on top. A canopy, lockable tonneau cover or integrated bike racks could be added easily.

Attention to small items, such as the machined aluminium tie downs for the tonneau cover, has turned several functional items into design detail features.

Functional items to aid the active user have also been added. The unique rear bumper incorporates a 240v power socket and an outlet for the 50-litre on-board water storage tank.

The opposed doors of the Ford R5 open to reveal a futuristic combination of form and function. The five seats in the cabin are trimmed in Eucalypt suede with contrasting charcoal nylon mesh inserts.

The rear seat has a 60/40 split, with access through to the load area to create external load access for long items such as water skis or surfboards.

The R5 is powered by a 220kW 5.0 litre V8 mated to a 5-speed manual transmission. Large four-wheel discs with twin-pot calipers have also been fitted.