BA Falcon's high performance Barra 240T engine in the XR6 boasts a turbocharger and intercooler to boost power to a class-leading 240kW.

It will be available in both XR6 sedan and Ute models in manual and automatic transmission guises.

The aptly named Garrett GT40 turbo blows to 6psi, helping the 4.0-litre in-line six-cylinder engine to 450Nm of torque between 2000rpm and 4500rpm.

The Ford BA Falcon XR6 Turbo shares the enhanced rev limit of the standard I6 engine, now redlined at 6000rpm.

The turbocharged engine has a knock sensor can run on regular unleaded fuel. However, for optimum performance PULP is recommended. 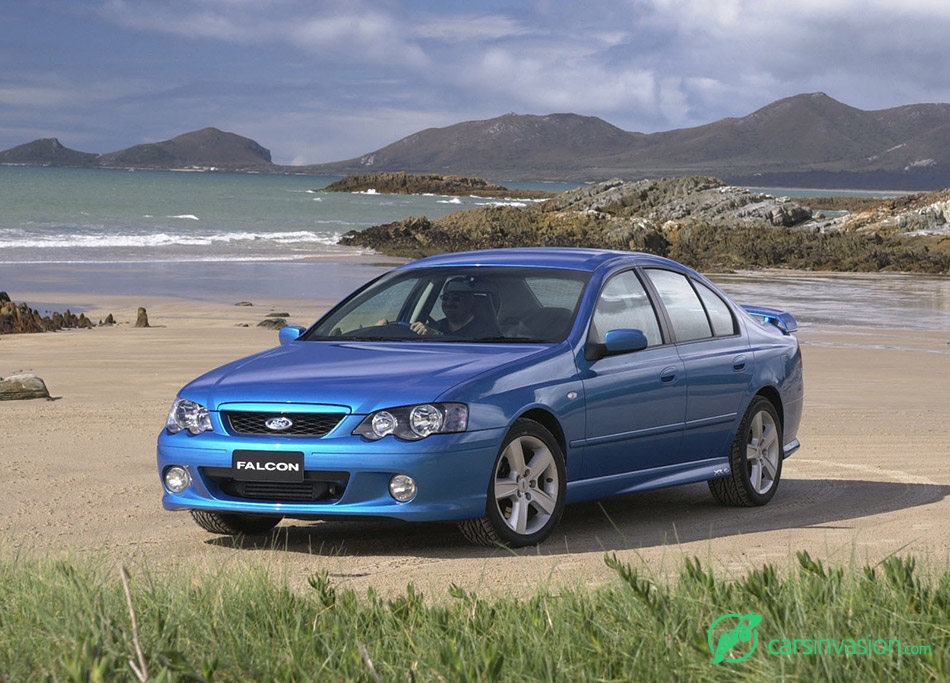 Full wastegate control is managed by the modified Powertrain Control Module and oil and water are used to cool the turbo during driving and also in shut-down.

The engine is calibrated for minimum lag, ensuring maximum enjoyment of the extra power and torque.

The base I6 engine is modified with the adoption of new pistons with a dished bowl and fully floating gudgeon pin. The top two piston rings are of a different design, in order to cope with the higher peak operating temperatures and the combustion pressure.

The compression ratio is 8.7:1, down from the 9.7:1 of the standard in-line six, and a heavier duty lubricating oil is used in the engine.

Retaining all the Barra I6 engine updates of the standard engine, the Turbocharged version has revised variable camshaft timing actuation to suit the turbo engine characteristics.

The cylinder head is modified to cope with the higher temperatures incorporating unique exhaust valves. It is topped by a red rocker cover complete with black insert bearing the legend ‘Turbo'.

Connecting rods and bearings and crankshaft are all carried over from the standard engine.

The fuel delivery system is up-rated to 4 bar, a 40 per cent increase on the standard fuel pressure. The Turbo has a larger capacity in-tank fuel pump.

The cooling system is up-rated to cope with the extra heat generated by the turbocharger and uses twin cooling fans.

The intercooler is mounted low in the front of the car, visible through the under bumper air intake slot.

Heat shields are used in several locations to protect components such as the steering column assembly and the under floor area above the three-inch diameter dump pipe and the catalysts.

The exhaust pipe splits into two tracts on leaving the catalyst before recombining at the rear muffler and exiting as a large oval tailpipe. The exhaust note has been specially tuned for the Turbo engine and matches the high-tech sound of the revised I6 engine.

Designing the turbocharger and intercooler to fit in the Barra engine bay required significant effort by the computer aided engineering team. Development of the turbo package was contracted to Ford Performance Vehicles.

The Turbo engine is mated to either a five-speed BTR T5 manual gearbox or the Sequential Sport Shift four-speed automatic, with modified adaptive shifting unique to XR models.

Manual models have a unique clutch, and traction control is standard on all Turbo sedan models.