In a throwback to the famed Shelby GT350H "Rent-A-Racer" program from the 1960s, Ford Motor Company, Shelby Automobiles and The Hertz Corporation are partnering to produce a special run of performance-modified Ford Mustang GTs – designated Shelby GT-H, for "Hertz" – that will be available for rent later this spring exclusively through Hertz. Approximately 500 units will be available through the Hertz Fun Collection at select airport locations Arizona, California, Colorado, Florida, Hawaii, Massachusetts, Nevada, Oregon and Washington.

Forty years ago, Carroll Shelby and The Hertz Corporation came up with an ingenious plan to help get a batch of high-performance, special-edition Shelby Mustangs into the hands of rental customers who also happened to be car enthusiasts. Ford supplied the new Mustangs with V-8 engines and mostly automatic transmissions, Shelby added extra performance and style, and Hertz gave the public access to the kind of unique driving experience that one would normally only find on a racetrack. Today, the story of the Shelby/Hertz "Rent-A-Racer" is legendary and surviving Shelby GT350H Mustangs are among the most sought-after collector cars in the world. 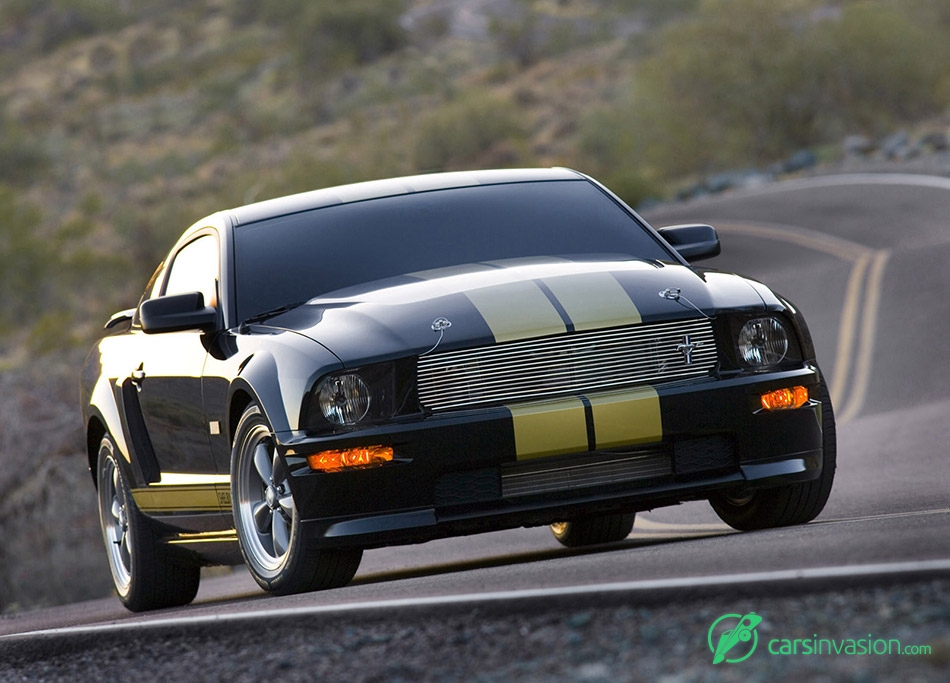 To connect the magical past of the original Shelby GT350H with the modern capabilities of the new Ford Mustang, Shelby, Ford and Hertz have again teamed up, and – together with the Ford Racing Performance Group – have given the 2006 Ford Shelby GT-H a very classic, muscular look as well as some true performance credentials.

"Like the original Hertz cars, the Ford Shelby GT-H will be fun to drive," said Carroll Shelby, CEO of Shelby Automobiles, Inc. "We started with a terrific Mustang and modified it with some Ford go-fast parts and gave it a distinct look for Shelby-style driving. Whoever gets the opportunity to rent one of these unique cars will get an experience of a lifetime."

With the addition of the Ford Shelby GT-H Mustang into the Fun Collection, Hertz now offers 36 models that can be specifically reserved, ranging from mid-size to luxury cars, convertibles to SUVs and is the only nationwide car rental company able to allow customers to reserve the specific make and model vehicles at the time of reservation. More than 8,000 Fun Collection vehicles are available at 18 major airport locations in the United States.

"With 2006 marking the 40th anniversary of the Shelby GT350H joining the Hertz fleet, we're thrilled to be bringing legendary Mustang driving excitement back to our rental customers," said Walt Seaman, staff vice president, Worldwide Fleet, Maintenance, and Car Sales Operations for The Hertz Corporation. "The Shelby GT-H is a fun, powerful Mustang to drive, and will be a special part of the Hertz Fun Collection. As all cars in the collection are reserved by exact make and model, customers can rest assured that when they reserve a Shelby GT-H Mustang to drive, they will receive the Shelby GT-H Mustang upon arrival."

Like its predecessor, the 2006 Ford Shelby GT-H will be instantly recognizable – thanks to several eye-catching styling enhancements that are so much a part of the Shelby Mustang heritage. First and foremost, each Shelby GT-H will wear Black exterior paint set off with Gold racing stripes, a hallmark of Hertz's vehicle history dating all the way back to the 1920s.

While it's true that the Shelby GT350H was eventually made available in other color combinations, the Black-and-Gold combo is often referred to as "Hertz colors" by most Mustang aficionados. Shelby's traditional "Le Mans" dual overbody racing stripes are combined with a set of rocker stripes that include special "Shelby GT-H" nomenclature. Each car will also wear a Hertz Edition emblem on the front fenders, and feature Hertz Shelby GT-H sill plates and a numbered dash badge with Carroll Shelby's signature inside the cockpit.

To give a hint of the Mustang GT 4.6-liter 3V V-8 engine's added capability, the Ford Shelby GT-H is fitted with a custom Shelby Performance hood with pins, and a brushed aluminum grille with running horse emblem. A unique front fascia with integrated lower grille, as well as a set of body side scoops – reminiscent of classic Shelby Mustangs is incorporated for a distinct look. To further catch the enthusiast's eye, the Mustang GT brakes are dressed up with painted calipers, which can be seen through the GT-H's 17-inch aluminum wheels wearing P235/55ZR17 performance rubber. 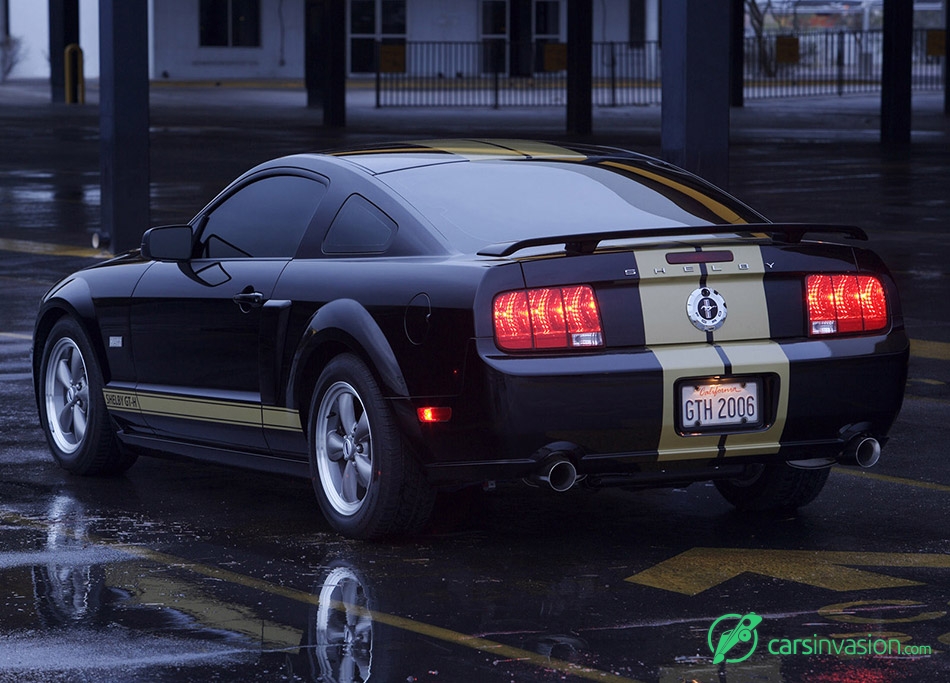 Ford Racing Performance Group is supplying its popular Power Pack (FR1) to add a genuine 25-horsepower Ford performance kick to the 300-horse Mustang GT 4.6L V-8/Five-speed automatic transmission powertrain and an increase of 10 lb.-ft. of torque. The package includes Ford Racing's 90mm Cold Air kit, the Muffler Kit, a new X-pipe similar to the one used on the new Ford Shelby GT500 Mustang, a performance calibration and a cat-back performance exhaust for that throaty sound that will make this car unmistakably a Shelby Mustang GT-H.

"Any Mustang that traces its roots to a Shelby GT350H has to boast increased performance and handling over its factory stock configuration," said Cisco Codina, group vice president, Ford North America Marketing, Sales and Service. "Ford Racing's involvement with niche performance Mustang builds like this Hertz project is a natural for us as well as for Hertz and Shelby."

To put that extra horsepower to the ground, the Ford Shelby GT-H also comes with the Ford Racing Handling Pack (FR3) installed, including special-tuned dampers inspired from the FR500C, lowering springs, sway bars and a strut tower brace – plus a Ford Racing 3.55:1 ratio rear axle assembly for extra off-the-line acceleration.

Ford Racing will be working hand-in-hand with engineers and technicians at Shelby Automobile's assembly facility in Las Vegas during the build-out of the GT-H for delivery to Hertz. With total production expected to number only around 500 units exclusively destined for Hertz rental fleets across the country, this special-edition Ford Shelby GT-H is sure to give Hertz customers a truly exclusive driving experience like only Shelby and the Ford Mustang can deliver.

"This GT-H project has been terrific," said Amy Boylan, president, Shelby Automobiles Inc. "My team here at Shelby Automobiles is very excited with what we have put together with Ford, and Hertz – a pony that not only has a special look, but can really run, too. Those who get to rent a GT-H in the coming months will have the opportunity to enjoy a car that looks, accelerates, handles and sounds the way a high-performance Shelby-ized Ford Mustang should. It will prove lots of fun for Hertz customers looking for some real driving excitement."