Two wheels more than normal, plus power in abundance as is the norm for BRABUS: in the BRABUS B63S - 700 6x6 a particularly exclusive power off-roader based on the new Mercedes G 63 AMG 6x6 celebrates its world premiere at the 2013 IAA in Frankfurt/Main. BRABUS lends the most exclusive G-Class of all times even more punch: powered by a 5.5-liter V8 Biturbo with BRABUS B63S - 700 engine tuning producing 515 kW / 700 hp (690 bhp), the six-wheel drive powerhouse weighing in at around four tons sprints from rest to 100 km/h (62 mph) in just 7.4 seconds.

The top speed is limited electronically to 160 km/h (100 mph) due to the 37-inch off-road tires. As a contrast to the striking black, chrome and carbon-fiber BRABUS exterior, the BRABUS interior designers picked a fiery red Mastik leather/Alcantara interior.

The Mercedes G 63 AMG 6x6 built in small-series production comes normally with a 5.5-liter eight-cylinder four-valve Biturbo engine producing 400 kW / 544 hp (536 bhp). BRABUS can draw upon the world's most extensive engine tuning program for Mercedes-Benz automobiles in the case of this special model as well. 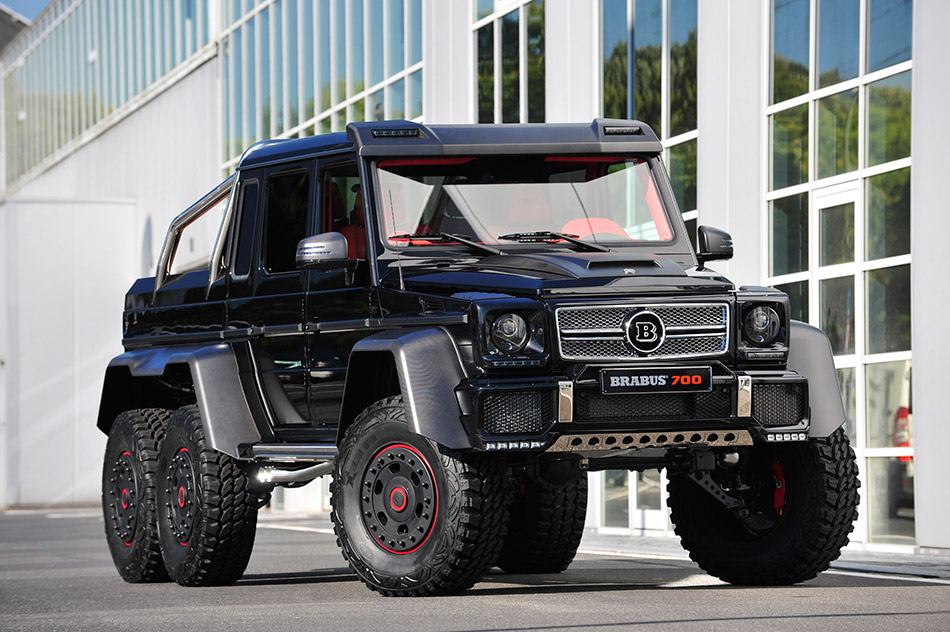 The BRABUS B63S - 700 performance kit, which is also available for all other current Mercedes-Benz 63 AMG SUVs, unleashes the inherent power slumbering in the turbocharged V8 engine. To realize the enormous power increase by 115 kW / 156 hp (154 bhp) the peripherals of the V8 are modified extensively.

The production turbochargers are replaced by two special BRABUS turbochargers with larger compressor unit, which produce a higher boost pressure. BRABUS Gold Heat Reflection sheathing for the intake and charge-air pipes further lower the charge-air temperature. This measure contributes equally to the power yield and to the flawless durability, which also manifests itself in the BRABUS Tuning Warranty of three years, up to 100,000 kilometers/62,000 miles (see BRABUS Warranty Terms and Conditions, updated July 2013) that is unparalleled in the industry.

In addition, special high-performance metal catalysts with 75-mm (2.9 in.) downpipes are installed to lower the back pressure. The stainless-steel sport exhaust system with controlled butterfly valve was custom-developed for the G 63 6x6 AMG and offers both optimized power yield and active control of the exhaust note. Drivers can select at the push of a button between the subtle "Coming Home" mode and a markedly potent exhaust note in the "Sport" position. The BRABUS exhaust system also puts its visual stamp on both sides of the vehicles with two striking dual sidepipes.

With these major modifications the B63S - 700 engine, which is also available for the G 63 AMG 4x4 model, produces 515 kW / 700 hp (690 bhp) at a low 5,300 rpm. The BRABUS engine also delivers a much heftier torque: between 2,000 rpm and 4,500 rpm the engine sends a massive 960 Nm (708 lb-ft) of torque instead of the standard 760 Nm (561 lb-ft) to the AMG SPEEDSHIFT PLUS 7G-TRONIC automatic transmission. This is complemented by special BRABUS aluminum shift paddles that facilitate manual gearshifts from the multifunction steering wheel of the G-Class. The high-tech lubricants for the entire powertrain are supplied by technology partner MOTUL.

Thus equipped the six-wheeled heavyweight turns in an acceleration performance that can measure up to full-blooded sports cars. 7.4 seconds for 0 - 100 km/h (62 mph) are absolute tops for a vehicle weighing in at just less than four tons. The heavy-duty off-road tires the 6x6 is equipped with necessitate limiting the top speed to 160 km/h (100 mph).

BRABUS also gives the 6x6 a strategic visual upgrade. The imposing nature of the front is further strengthened by purposeful modifications. The BRABUS front spoiler edges attach to the production fascia and are combined with an additional molding below the special radiator grille with integrated BRABUS logo. The BRABUS carbon-fiber hood scoop adds another striking highlight. The mirror-polished BRABUS underride guard provides an interesting contrast to the all-black paintwork. 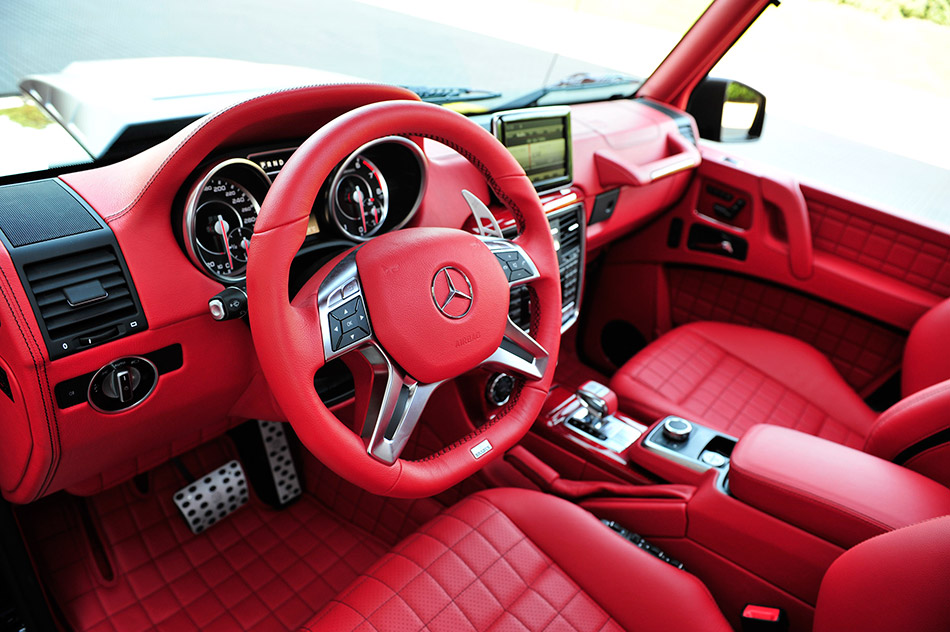 The innovative BRABUS lighting concept sets further visual signals. It includes dark-tinted LED lights integrated into the front spoiler edges. Even more dominant are the black BRABUS xenon headlights and daytime running lights with integrated turn-signal function for all current models of the venerable off-roader. The now obsolete production turn signals on top of the fenders are replaced with clear-coated matt carbon-fiber covers. In conjunction with the matt carbon-fiber structure on the hood and the carbon-fiber shells for the exterior mirrors they round out the belligerent 6x6 look to full effect.

Another focus of the BRABUS refinement for the mightiest G model ever is in the cockpit. The company upholstery shop meticulously crafted an exclusive BRABUS fine leather ambiance from a combination of fiery red and black leather and Alcantara.

The great love of detail and the quality of the upholsterers' craftsmanship is evident in the pinpoint precision of the topstitching of the leather floor and the headliner. The passengers are welcomed by stainless-steel scuff plates with backlit BRABUS logo. The BRABUS interior designers add some pronounced accents with aluminum components such as pedals and door-lock pins.