The 2011 Ford Explorer has been redesigned from bottom to top, inside and out, to reflect a contemporary vision of what customers today want in a modern SUV.

"Ford has changed everything about the all-new Explorer, yet it's still instantly and instinctively recognizable as a Ford Explorer," said Moray Callum, executive director of North America Design. "We believe that's because it's a contemporary interpretation of the same capabilities Ford Explorer has always stood for, without compromise."

The Ford Explorer design team was challenged with reinterpreting the segment-defining icon as a modern, contemporary SUV for the 21st century.

Ford Explorer's design is connected to Ford brand DNA through wheel flares inspired by the Mustang and a body-side undercut that follows current Taurus design protocol, Betancourt explained. "Up front, Ford Explorer has a new interpretation of the Ford signature three-bar grille. Below the bumper, the Ford DNA trapezoidal lower grille provides visual continuity across Ford vehicles on the showroom floor." 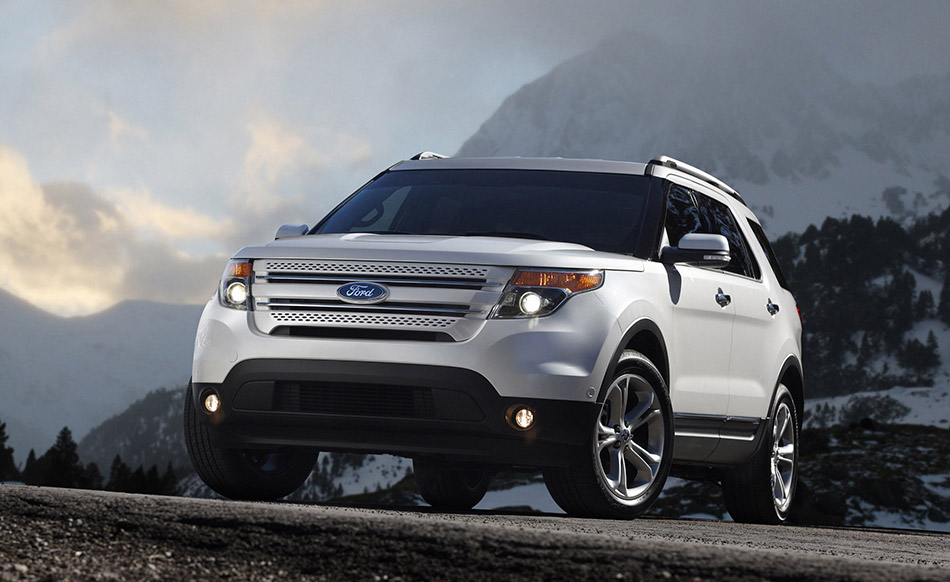 From the rear, LED stop lamps glow from the jewel-like taillamp cluster. The Explorer name projects from the rear liftgate appliqué.

Inside Ford Explorer: Soft touches and upscale seating for seven

The feeling of the interior is one of an upscale, premium vehicle, from the choice of materials to the high levels of fit-and-finish.

"Make it look expensive: That was my goal for the new Explorer interior," said Mike Arbaugh, interior studio manager. "This is a vehicle that challenges higher-end SUVs like BMW X5 and Audi Q7, so the interior design, craftsmanship and fit-and-finish should play in that league."

The new Ford Explorer interior package is a best-of-both-worlds approach, combining premium European design cues - imparting a sense of driving dynamics - with a sophisticated and uniquely American familiarity. The graceful, seamless flow from instrument panel into the doors and the forward-leaning center stack reflect the sporty, European theme while the command seating position bestows the sense of security so important to SUV buyers.

The Ford Explorer interior package also reflects the latest iteration of Ford DNA storage thoughtfully arranged throughout the cabin, including clever spaces for everything active families like to take along.

"As a designer and an audiophile, I'm really excited about the metal speaker grilles in the door panels," said Arbaugh. "They impart SUV ruggedness, they look technical and expensive, and they offer superior sound transparency."

"The modern design, soft-touch surfaces and chrome accents harmonize to give the new Explorer an upscale aura we think customers will really appreciate in a three-row, fully capable SUV," said Arbaugh. "The media hub and MyFord Touch™ driver connect technology not only reflects SUV buyer lifestyles, it enhances them."

The new Ford Explorer elevates the importance of SUV fit-and-finish, not just for North American customers but on a global stage. Ford Explorer is the most exported North American nameplate in the Ford brand portfolio. To that end, the 2011 Explorer was designed and developed to exceed not only North American standards, but global standards for the execution of interior surfaces and the absence of protruding edges.

Meeting these global standards called for tighter surface margin gaps and tolerances, equal to or better than Audi. While this presented some challenges for the interior design team, it also served to underpin the advance in Ford Explorer interior craftsmanship and quality.

A global internal Ford craftsmanship and quality process was instituted with Ford Explorer development, providing metrics and benchmarks to include better quality materials, with enhanced focus on how well interior and exterior parts come together.

As part of Ford's global product development system, Ford Explorer was subject to extreme testing while still in the virtual computer-aided design phase. Issues identified and addressed in the virtual realm help deliver a higher quality vehicle when prototype build begins. Then these running prototypes are tested and validated to ensure that the attributes targeted at the outset are delivered for customers.

The Ford Explorer vehicle engineering team took prototypes over Colorado's 13,114-foot Imogene Pass, buried them in deep sand in the California desert, carved through snow in Minnesota and Northern Michigan, traversed a slippery red clay mud bog in Alabama, and logged countless development and validation miles at both Arizona and Michigan proving grounds.

The goal: Deliver a durable, high-quality, fully capable and fuel-efficient SUV for today's customers in more than 90 countries around the world.

The 2011 Ford Explorer was designed and developed to deliver best-in-class levels of NVH control and to rival premium SUVs in quietness. Customer research told the Ford Explorer development team that the interior of an SUV should be serene and soothing.

Ford Explorer's quiet ride began in the design phase. A unibody configuration with fewer parts means reduced opportunity for squeaks and rattles. The front bolster housing the radiator is one single component, whereas a key competitor requires 11 separate pieces to perform the identical function. In addition, Ford Explorer features a hydroformed front structure to add strength, save weight and reduce NVH.

Ford Explorer development employed NoiseVision technology and statistical modeling to optimize NVH balance. NoiseVision consists of a sphere with hundreds of tiny cameras and microphones that allow engineers to pinpoint individual sounds at various frequency bands. This enables isolation and correction of potential noises early in the process.

Statistical modeling was employed to tune Ford Explorer sounds. Customers prefer some engine noise - upon acceleration, for example. This analytical measure helps engineers to balance eradication of unwanted sounds, yet accommodate for sounds that appeal to drivers.

The Ford Explorer 3.5-liter V6 is offered as standard equipment across base, XLT and Limited models. Delivering an anticipated improvement in fuel economy of more than 20 percent versus the previous Explorer model, this smooth and powerful V6 enables intelligent four-wheel drive (4WD) with terrain management. The improvement in efficiency helps Ford Explorer to surpass fuel economy figures for the 2010 Honda Pilot and other vehicles in the segment.

Using Ti-VCT for optimized fuel economy and reduced part-throttle emissions, this engine delivers an estimated 290 horsepower and 255 lb.-ft. of torque.

Noise, vibration and harshness (NVH) characteristics are controlled and reduced through a tuned composite upper and lower manifold, the silent-chain cam drive and an acoustic engine cover.

The Ford Explorer 3.5-liter V6 delivers best-in-class fuel economy yet offers power to tow up to 5,000 pounds when properly equipped.

For SUV drivers seeking maximum fuel efficiency, Ford introduces the all-new Ford Explorer with an available EcoBoost2.0-liter I-4. Combining direct injection of gasoline and turbocharging, this advanced engine delivers performance comparable to normally aspirated competitive V6 engines. Developing up to 237 horsepower at 5,500 rpm, this I-4 delivers 250 lb.-ft. of torque.

Estimated fuel economy improves by more than 30 percent, putting the fuel efficiency of the Ford Explorer in line with sedans such as the 2010 Toyota Camry V6.

Like other Ford EcoBoost engines, peak torque is generated at a low 1,700 rpm across a broad band to 4,000 rpm. This torque plateau makes for flexible, efficient power delivery across a wide range of engine and vehicle speeds, while helping save fuel by making power at lower rpm levels. Ti-VCT, four valves per cylinder and DAMB valve lifters increase mechanical efficiency through improved engine breathing across the broad power and torque bands.

A relatively high compression ratio is enabled by the use of direct gasoline injection, operating at fuel pressures from 2,200 to 2,800 psi. The unique turbocharger is optimally matched to the EcoBoost I-4 engine and SUV vehicle performance behavior. Precise fuel pressure control allows the Ford Explorer I-4 to deliver boosted power at low rpm, without annoying turbo lag.

The EcoBoost I-4 uses 5W30-GF4 oil to reduce friction and reduce cost of ownership through 10,000-mile oil change intervals.

Targeted durability is 10 years, or 150,000 miles. Durability actions include enhanced oil filtration and cleanliness, the addition of an aluminum oil cooler with improved heat dissipation and cast inter-bore cooling inside the aluminum engine block. This engine represents the initial U.S.-market application of the brick-style charge-air cooler, delivering increased thermal efficiency.

The new 2.0-liter EcoBoost engine is being introduced globally by Ford Motor Company, with applications in various products in Europe, Asia and Australia, in addition to the new Explorer.

EcoBoost technology will serve as a key element in Ford's global sustainability efforts, powering up to 1.3 million vehicles on an annual basis by 2013.

The unique six-speed transmission paired with each Ford Explorer offers performance and economy advantages with the flexibility of optimum gearing for every situation. Lower gears provide the benefit of improved acceleration from a full stop, while higher gears help increase fuel economy by allowing the engine to operate at lower speeds when cruising.

Ford Explorer powertrains have been developed to provide SUV drivers with the power and capability they expect and deserve, coupled with the fuel economy they really want.

The all-new Ford Ford Explorer will offer SUV customers a broad range of trim levels and customer convenience and connectivity technologies that will raise the eyebrows among even luxury SUV owners.

"Today's SUV customers really aren't interested in compromising," said Amy Marentic, group marketing manager. "They want luxury, convenience and technology with their all-road capability. Until now, they had to choose a luxury SUV to get the features they want - a feature level that this all-new, industry-leading Ford Explorer now exceeds."

Blind spot monitoring, which looks out for the driver when backing from a parking spot with limited visibility, adaptive cruise control that safely monitors vehicles ahead, and active park assist that aids in finding and executing a parallel parking maneuver all represent technologies a buyer might expect to find when shopping premium SUVs. The all-new Ford Explorer offers these and more. 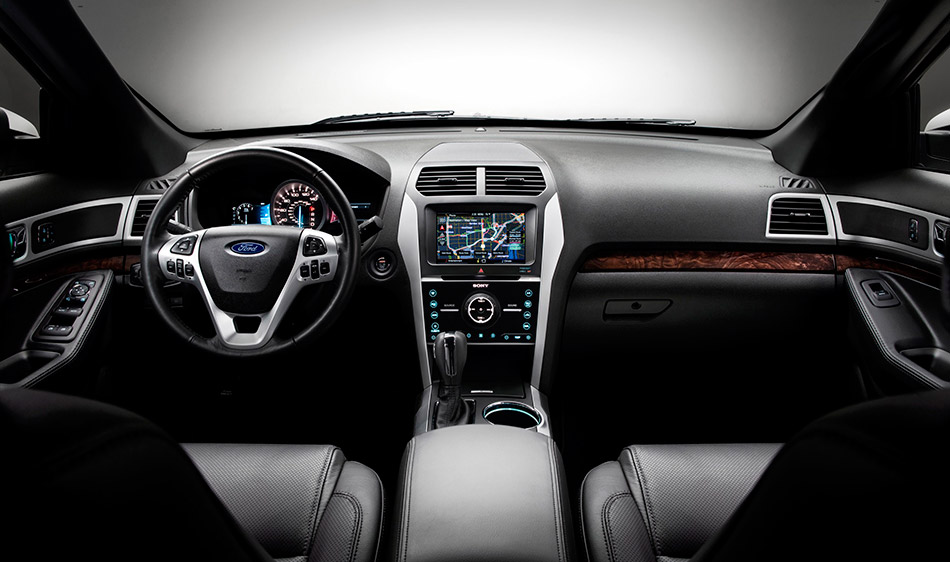 Base is the new well-equipped

The base Ford Explorer delivers a strong package of customer convenience and technology features, with the following items as standard equipment:

The base Ford Explorer features cloth seats with first-row adjustable buckets, a 60/40 split fold-flat bench seat in the second row, and a 50/50 third-row split folding bench.

SUV buyers seeking luxury with their capability will be impressed with the generous levels of convenience and connectivity technologies offered in the all-new Ford Explorer Limited. From remote start through a 10-way leather-trimmed driver's seat to adjustable pedals with memory settings, Limited takes Ford Explorer luxury to a higher level.

Ford Explorer Limited includes all of the feature content offered in the XLT, plus:

The all-new Ford Explorer Limited can be further enhanced with a pair of series-specific option packages that add even more luxury, convenience and safety:

"All these features help the all-new Ford Explorer challenge the notion of what SUVs can offer customers," Marentic said. "This level of luxury, capability, convenience and connectivity, combined with jaw-dropping fuel efficiency, is the kind of leadership today's SUV customers need and appreciate, coming from a nameplate they know and trust - Ford Explorer."