"The new 2011 Ford F-150 Harley-Davidson perfectly blends the flexibility and capability of F-Series trucks with the free spirit of Harley-Davidson® motorcycles," said Eric Kuehn, chief engineer. "Both companies have a passion for the road, which shines through in our specialized truck."

The successful collaboration between these two icons of the open road has produced nine F-150 models, as well as six Super Duty F-250 and F-350 models, and in 2009, the first Harley-Davidson F-450 edition truck. The exterior of the 2011 Ford F-150 Harley-Davidson™ offers a bold front fascia and six-bar-shaped billet-style satin chrome grille and boasts "Harley-Davidson" satin chrome badging. The truck also has a lowered appearance because of a standard, fully integrated deployable running board.

New graphics on the hood and body side of the truck are executed in an engine-turned finish and feature dimensional satin chrome "Harley-Davidson" lettering. The graphics are reminiscent of the "speed scallops" used on hot rods. 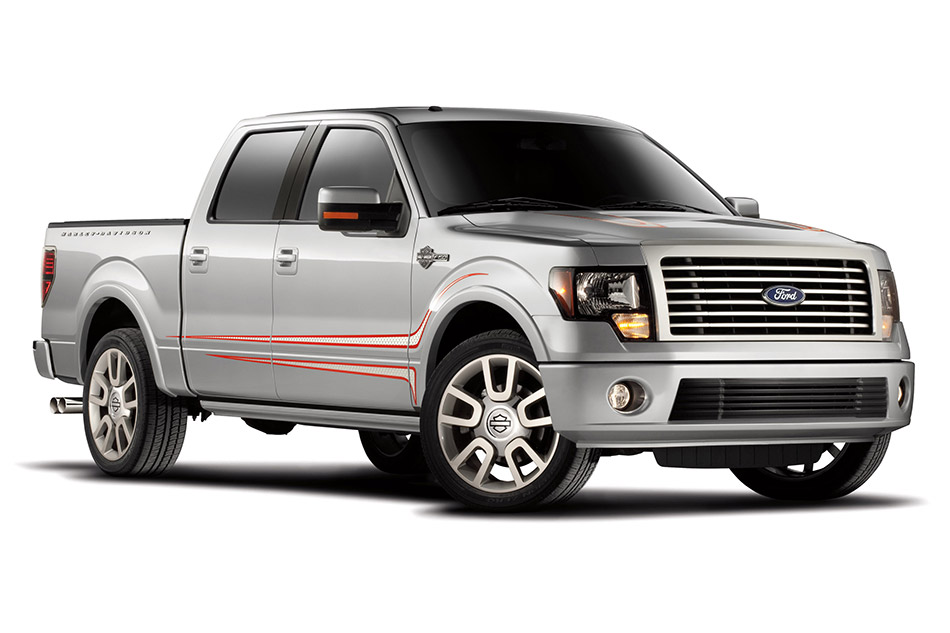 "This engine has tons of torque and already has been proven in the field with both the F-150 SVT Raptor and Super Duty," said Mike Harrison, V8 engine program manager. "The exhaust for the Ford Harley-Davidson edition has been specially tuned to feature a throaty V8 rumble customers will love."

Benefits of the new 6.2-liter V8 gasoline engine include:

Taking convenience to the next level

This screen offers menu options, giving the customer important information related to fuel economy and towing performance. The menu is navigated through a five-way button on the steering wheel and is positioned between the tachometer and speedometer.

For the customer who wants more control of transmission gear selection, SelectShift Automatic™ transmission functionality is available. A toggle switch located on the console shift lever engages the mode, where the transmission doesn't second-guess the driver, giving him or her total control over gear selection and performance feel.

Other standard features on the 2011 Ford F-150 Harley-Davidson™ include:

The 2011 Ford F-150 Harley-Davidson interior is customized to appeal to the truck buyer who appreciates the attention to detail for which both Ford and Harley-Davidson are renowned.

Examples are the seats and console lid, which feature handmade cloisonné badges that are produced by the same company that makes badges for Harley-Davidson® motorcycles; the console has a limited-edition serialization plate, which is numbered individually.

"We take creation of the Ford Harley-Davidson trucks very seriously, but it's also something we have a lot of fun with along the way," said Design Manager Brad Richards. "We hope that comes through in each of the finished trucks.

"We ensure Ford Harley-Davidson trucks exude the same bold personality as the legendary motorcycles," Richards added. "We take two brands that are undeniably unique and forge a product that embodies the best qualities of both."