The dynamic new Ford Tourneo Custom Concept will make its global debut at the 2012 Geneva Motor Show, bringing a new level of energy and style to the European personal use vehicle segment.

Previewing the introduction of a completely new range of people movers, with commercial vehicles to follow, the Ford Tourneo Custom Concept showcases a dramatic new look that will appeal to customers seeking style, functionality and space.

"One look at the Tourneo Custom Concept is enough to tell you that it will inject an exciting new spirit into the personal use segment," said Stephen Odell, chairman and CEO, Ford of Europe. "Our forthcoming new range gives us the opportunity to appeal to new customers with a fresh new direction, and we have seized that opportunity with both hands.

"We are excited to present this significant new concept in Geneva. The Tourneo Custom's car-like qualities will be appreciated by a broad range of business and leisure customers, and this is a fitting venue to present the vehicle for the first time."

The Ford Tourneo Custom Concept will preview of a host of exciting new features, which give the vehicle strong car-like appeal. 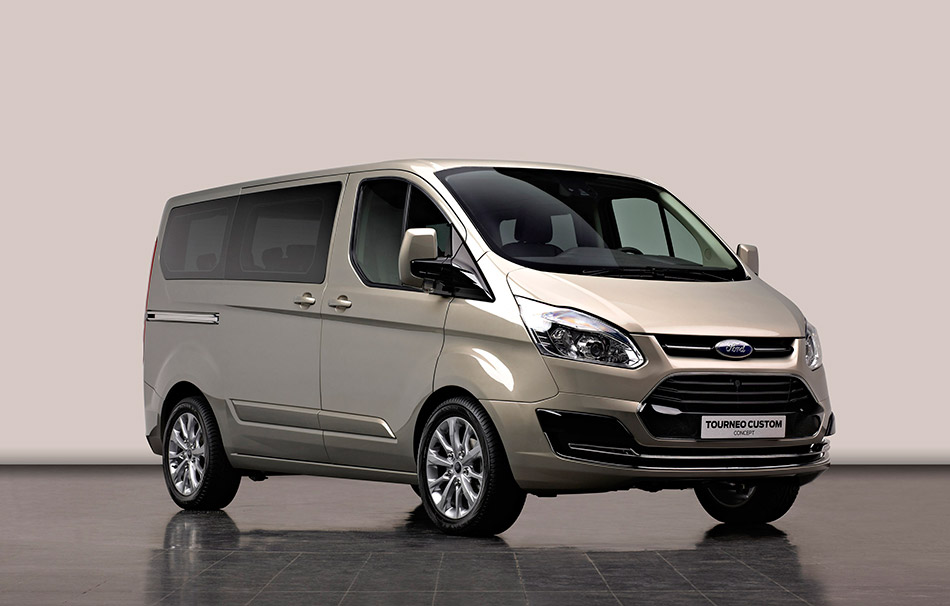 These include an all-new interior design with driver-focused cockpit, and a luxurious, fully trimmed cabin which has the ambience and high-quality materials of a modern multi-seat saloon car.

The Tourneo Custom Concept communicates very clearly a dramatic new design direction for Ford's commercial vehicle range, which will be introduced later in 2012.

With its advanced, streamlined appearance, the concept vehicle embodies the same dynamic character as Ford's Kinetic Design passenger cars - generating the strong sense of movement, even when the vehicle is standing still.

"We set out to create a design with clean, futuristic lines and with a real sense of occasion," explained Paul Campbell, chief designer, Ford of Europe.

"With its sportier stance, bold rising shoulder line and flush glazing, the Tourneo Custom Concept brings something fresh and exciting to this class of people mover.

"By applying the latest Kinetic Design principles, the design has a completely new style and drama," he added.

Signature Kinetic Design features helps give the Tourneo Custom Concept its unique character, including the bold trapezoidal grille, strong and muscular shoulder line, prominent wheel lips and window lines with the distinctive kick at the rear.

The concept is further enhanced by a number of stylish details from the chrome grille surround and striking LED lighting on the front-end, to the dynamic looks of the 18-inch alloy wheels.

Bringing a whole new level of car-like style and sophistication to the personal use segment, the Ford Tourneo Custom Concept features an all-new interior design.

"We wanted to give the driver, and the rear seat passengers, an interior which has the same standards of design and quality they would experience in a modern multi-seat saloon car, but with ample space for people and luggage" explained Campbell.

"From its modern, driver-focused cockpit, to the luxurious rear cabin finished in leather, the Tourneo Custom Concept shows that interiors in this class can be both functional and attractive."

The stylish, sculpted instrument panel is orientated around the driver, and features technologies which are closely-related to those in Ford's car range. Like the exterior, the interior follows the same Kinetic Design approach as the latest passenger cars, such as in the taut wing-like section of the upper instrument panel.

Occupants in the rear are surrounded by space and luxury, with a fully-trimmed cabin which incorporates bold Kinetic Design detailing on the side panels which are linked to the graphical themes from the front.

The rear seats themselves are a completely new design, which can be easily folded into multiple configurations, or removed completely. This enables the interior to be easily tailored to suit business or leisure pursuits.

In the concept vehicle, the luxurious and spacious feel of the interior is further enhanced by an exclusive two-tone colour scheme, featuring hand-stitched leather seats with attractive cloth inserts.

The Tourneo Custom Concept highlights that customers in the personal use market can expect the same high levels of technology which are enjoyed by Ford car drivers.

Among the smart, innovative features included on the concept are:

To ensure that this enhanced specification is complemented by outstanding performance and fuel economy, the concept is powered by a further improved 155 PS version of Ford's 2.2-litre Duratorq TDCi diesel engine family.

The Tourneo Custom Concept is based on a new Ford global platform which has been engineered to deliver car-like dynamics, including agile, responsive handling, enhanced ride comfort and reduced noise-levels.

"Customers in the personal use market are demanding much higher levels of technology, performance and handling," said Barry Gale, chief engineer, Ford of Europe. "This concept shows that we are taking those demands very seriously, and that customers can expect a rewarding and car-like driving experience."

The debut of the Ford Tourneo Custom Concept has added significance in heralding the arrival of a completely new generation of Ford commercial vehicles. The full range of models will be revealed during 2012.

Kicking off this major series of introductions, the Tourneo Custom Concept itself highlights a new family of Ford people movers and one-tonne vans which will be launched in Europe and other global markets, but will not be sold in North America.

"The imminent arrival of an all-new people mover and van is an exciting moment for us," said Gale. "The new model gives us plenty to talk about, and we look forward to sharing more details very soon."

This new range will be powered by enhanced versions of the new 2.2-litre Duratorq TDCi diesel engine, which was initially introduced in 2011; with Auto-Stop-Start technology fitted as standard, Ford is targeting best-in-class fuel economy.

Three power ratings will be available: 100 PS, 125 PS and 155 PS. All versions are paired with a six-speed manual transmission and feature front-wheel drive.

The model range will include a wide choice of body styles and two wheelbases (SWB and LWB) allowing for extra luggage or goods capability where required.

Ford will be presenting larger and higher payload Transits later in 2012. These models will be sold globally, including North America, and will also feature rear-wheel-drive.

"2012 is a tremendously significant year for Ford as we begin the roll-out of a completely new range of commercial vehicles," said Odell. "Our market-leading commercials have established a tremendous reputation for value and durability, and our new range is destined to raise this to a new level."