The Mercedes-Benz C-Class is a great favourite with the public. Since its official market launch on 31st March, 2007, over 400,000 buyers have opted for a saloon or an estate from this model series. As a result of this, the C-Class has maintained its position as world-wide market leader in its segment. The new C 250 CDI BlueEFFICIENCY Prime Edition adds a further highlight to this successful model series which has already received numerous distinctions. With the new diesel engine, which celebrates its world premiere in this model, Mercedes-Benz shows that frugal consumption and high output – and with them both environmentally-friendly driving and driving pleasure – can be mutually compatible.

A displacement of 2143 cc, 150 kW / 204 hp, and 500 Nm of torque – these are the key figures of the completely newly-designed four-cylinder engine, figures that place it in the top position among the diesel engines of its class. The new Mercedes-Benz C 250 CDIBlueEFFICIENCY Prime Edition can accelerate from a standstill to 100 km/h in just 7.0 seconds, and from 60 to 120 km/h in 9.2 seconds (5th gear), on the way to its top speed of 250 km/h. Notwithstanding these exceptional performance figures, this premiere model only consumes an average of 5.2 litres of fuel per 100 km (NEDC), with CO2 emissions of 138 g/km - values achieved by no other comparable motor car. 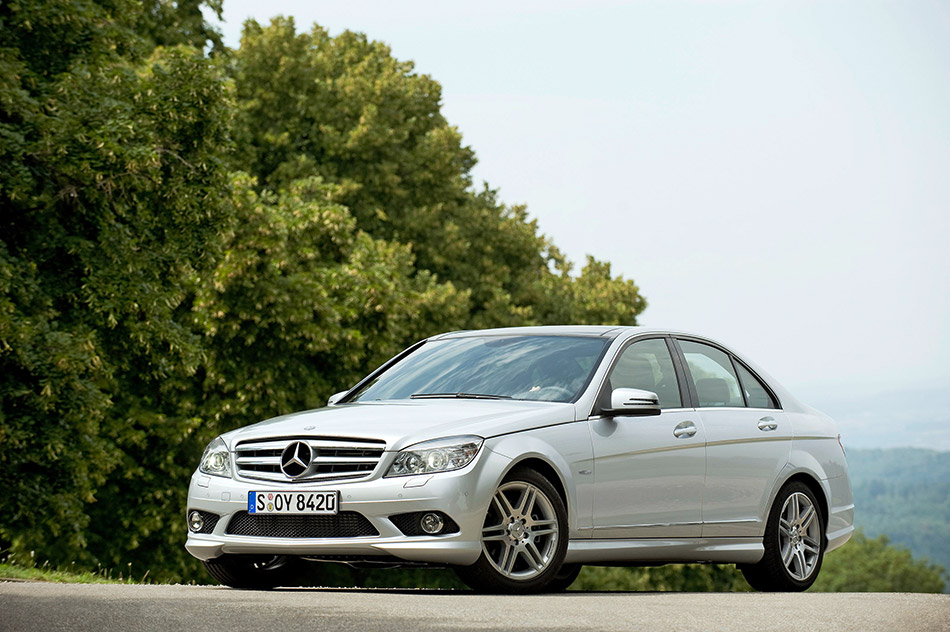 Furthermore, the engine also impresses with its eager responsiveness and smoothness of operation. The new powerplant offers significantly improved torque build-up from low engine speeds, compared to its predecessor model. The benefit of this is that in everyday driving situations it enables low-consumption driving at low engine speeds. In addition, the new engine will assume market leadership in terms of untreated exhaust emissions. Already today, it complies with the future EU5 emissions standards and, beyond that, has the potential to comply with the EU6 and BIN5 standards as well.

The basis of the new C 250 CDIBlueEFFICIENCY Prime Edition is the C-Class saloon of the AVANTGARDE equipment line, in which the sporting genes of the Mercedes-Benz brand come particularly to the fore, most noticeably in the radiator grille with its distinctive louvres and the large, centrally positioned Mercedes star. Among car connoisseurs this design element has been seen, for a long time, as a typical badge of the sportier Mercedes models. Now, in the AVANTGARDE models of the C-Class for the first time the star graces a saloon, as an unmistakable expression of the vehicle's inherent strengths: agility, power and performance, without at the same time neglecting other time-tested C-Class attributes such as safety and long-distance comfort. Aluminium interior trim (optional: bird's-eye maple) and other stylish details accentuate the sporty, effortlessly superior appearance of this model.

The cockpit is designed along sporty lines with clearly laid-out dial instruments, such as may be found in roadsters or coupés. Silver-coloured bezels, black dial faces, white markings and white needles perfectly combine form with function - in short: a high-class appeal and easy legibility.
Equally clearly laid out and well-arranged are the optional two-tone dashboard and centre console. The colour display is integrated into the upper centre of the dashboard. This is perfectly positioned within the driver's line of vision, but can also be covered or folded away as required, without switching off the radio, navigation system or other units linked to the display. If the pivoting cover of the display aperture is closed, the infotainment units continue to operate.

Clarity and comfort thanks to an innovative control system

The display in the centre of the dashboard is part of the new control and display concept which the new C-Class has adopted from the luxury-class Mercedes models. A major advantage is rapid access to frequently used functions, which means that the driver does not need to relearn, but is able to maintain familiar habits and feels at home immediately. All the control and display elements necessary and important during a journey are located in ergonomically appropriate positions in immediate proximity to the driver.

Similarly, the multifunction steering wheel, fitted as standard, together with the instrument cluster, combine to form an essential element for providing quick access to the wide variety of information and functions which are available to the driver.

The extensive standard equipment of the C 250 BlueEFFICIENCY Prime Edition includes the Audio 20 infotainment system. This features, among other things, a keypad to enter telephone numbers and radio frequencies, as well as a Bluetooth interface that connects the mobile phone wirelessly with the hands-free feature. Other options include the Audio 50 APS arrow-based navigation system, as well as the high-end COMAND APS infotainment system with LINGUATRONIC voice control, hard disc, map navigation and music server. Floormats with the lettering "Prime Edition" draw attention to the special status of the new model. Aluminium trim (optional: bird's-eye maple) and other stylish details accentuate the sporty, effortlessly superior appearance of this model.

The extensive standard equipment of the C-Class is supplemented in the C 250 CDI BlueEFFICIENCY Prime Edition with the following equipment highlights:

The C 250 CDI BlueEFFICIENCY Prime Edition is equipped with 16-inch light-alloy wheels and 205/55 R16 tyres as standard – in addition to this, 16-inch light-alloy wheels in sporty 7-spoke design (likewise 205/55 R16 tyres) and 17-inch light-alloy wheels in 5-twin-spoke design with wide-base tyres (225/45 R17 at front, 205/40 R17 at rear) are available as no-cost options.
The C 250 CDI BlueEFFICIENCY Prime Edition model can be delivered in obsidian black, palladium silver or iridium silver. It is also optionally available in the special paint finish diamond white metallic. The sporty appearance can be emphasised even more forcefully with the optional AMG sports package, which includes distinctively-styled front and rear aprons as well as side skirts.

In the Mercedes-Benz C 250 CDI BlueEFFICIENCY Prime Edition the new diesel engine is combined with a sporty six-speed manual transmission with overdrive. This, too, contributes to the great efficiency of the model. Furthermore, Mercedes-Benz engineers have drawn up an additional package of measures in order to achieve the most exceptional consumption figures. The package includes among other things:

Experience from Mercedes-Benz eco-training shows that the driver, too, can save fuel by adopting an energy-conscious style of driving – and also do that without compromising driving pleasure. In the C 250 CDI BlueEFFICIENCY Prime Edition a newly-developed gearshift display on the dashboard assists the driver by informing him of the best moment to shift gear in order to save fuel. In addition to this gearshift recommendation, the instrument cluster shows the precise current fuel consumption.

Also included as standard equipment is the ADAPTIVE BRAKE, which is based on the technology of the S-Class. It provides additional support functions for even more safety and comfort. Examples include Start-Off Assist for uphill gradients, priming the braking system in critical situations and light contact to dry the brake discs in wet conditions.

An intelligently constructed vehicle body, up to 70 percent of which consists of high-tensile and ultra-high-tensile grades of steel, forms the basis for the protection of the occupants of the C-Class. Its front-end structure provides four independently acting impact levels, which enable forces to be distributed over a wide area while bypassing the passenger compartment.

The safety technology in the interior has been complemented with the very latest protection systems. Seven airbags are included as standard equipment: two adaptive airbags for the driver and front passenger, a kneebag for the driver, two sidebags in the front seat backrests and two large windowbags which extend from the A to the C-pillar during a side impact. The driver, front passenger and the passengers on the outer rear seats also benefit from belt tensioners and belt force limiters as standard. The standard head restraints operate on the NECK PRO principle: during a rear-end collision the padded surfaces are pushed forward within milliseconds to support the heads of the driver and front passenger at an early stage. This significantly reduces the risk of a whiplash injury.

The flashing brake lights developed by Mercedes-Benz are a major contribution to helping to reduce rear-end collisions. If the driver needs to brake hard at speeds in excess of 50 km/h, the brake lights flash rapidly to warn drivers following behind.

The PRE-SAFE® preventive occupant protection system is linked to active safety systems such as ESP® and Brake Assist, and is able to recognise critical driving manoeuvres at a very early stage. If the vehicle is in danger of crashing as a result of heavy under or oversteering, or if the driver needs to brake very heavily in a dangerous situation, PRE-SAFE® activates certain systems as a precaution to prepare the vehicle and its occupants for an impending accident. Accordingly the passive safety phase does not begin when the impact has already occurred, but even before an impending collision.