The five-seat C-MAX and seven-seat Grand C-MAX will also offer superior comfort and refinement when they go on sale across Europe in early 2015. The models will introduce advanced technology including Ford's SYNC 2 voice-activated connectivity system.

"The new Ford C-MAX family also delivers levels of refinement often found in larger, more upmarket vehicles – including the segment-first Hands-Free Tailgate that only requires a gentle kicking motion to gain access to the boot space."

Ford first introduced the C-MAX in 2003 and since then has sold more than 1.2 million in Europe. Now in its third generation, C-MAX has accounted for more than 12 per cent of all MAVs sold in Europe so far this year. 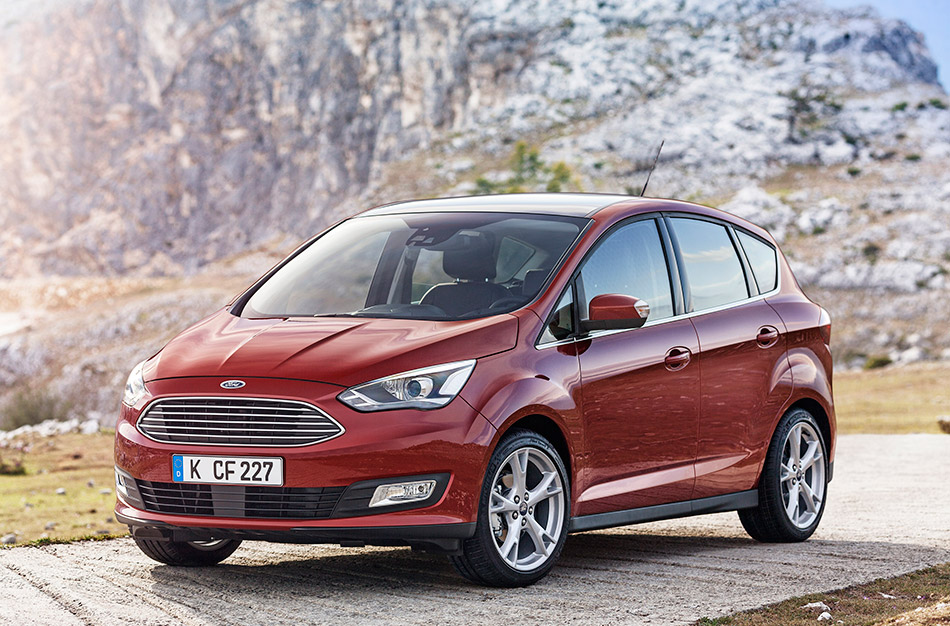 The Ford C-MAX family has been restyled to reflect the One Ford global design language and is available in new exterior colours Red Rush and a stylish brown-grey shade called Caribou. The dynamic styling delivers a stronger, sleeker front end, featuring Ford's distinctive inverted trapezoidal grille. The washer jets have been hidden underneath the windscreen to complement the cleaner look of the restyled bonnet.

The new Ford C-MAX and Grand C-MAX interiors follow the customer-led design refinements that have already been executed on new Focus. The more intuitive layout has fewer controls and switches, while the new black satin trim and chrome detailing contributes to a cleaner, modern look. Functions are simpler to use, such as the air-conditioning controls that now feature buttons that are easier to recognise and distinguish from each other.

A redesigned centre storage console offers increased space and features a sliding, integrated armrest. The new adjustable console accommodates a variety of bottles and cups with the capacity to hold a one-litre water bottle and a 0.4-litre cup simultaneously, while the swing bin glovebox makes items stored inside easier to access. A deeper upper storage area significantly improves the capacity on top of the dashboard for family belongings, and features a new USB connection point for integrating and charging mobile devices.

In addition, C-MAX and Grand C-MAX will be offered with higher quality trims across the entire range, a heated steering wheel, door-sill scuff plates and load-net fitting points behind both the first and second row seats.

Noise, vibration and harshness have been improved through the use of thicker side glass and more absorbent seals around the tailgate and rear view mirror. The engine bay heat shield has been filled with acoustic damping material to reduce powertrain noise, and diesel cars are equipped with extra acoustic seals to further reduce noise intrusion.

Continuing under the bonnet, a retuned dual mass flywheel helps to reduce shaking forces when the engine is under load, while new engine mounts offer improved refinement during Auto‑Start-Stop operation. On the outside, stiffer, noise- and vibration-optimised alloy wheels have been designed to reduce resonant vibrations.

"We are committed to delivering clean, and intuitive interiors across the entire Ford line-up and C-MAX is the latest vehicle to benefit from our comprehensive restyling programme," said Joel Piaskowski, director, Design, Ford of Europe. "The new C-MAX has received its most significant remodelling to date and is now more comfortable, more practical, and delivers the best driving experience in its segment."

The new Ford C-MAX family is equipped with advanced Ford technologies that help drivers avoid or mitigate incidents – from scrapes and bumps while parking to more serious, higher speed collisions.

Ford's Active Park Assist system locates suitably-sized parking spaces and, at the push of a button, steers the vehicle in to the space while the driver controls the accelerator and brake. C‑MAX and Grand C-MAX add Perpendicular Parking capability with the addition of two new ultrasonic sensors at the rear of the car. The system helps drivers reverse into spaces side-by-side with other cars.

The extra sensors also enable two additional technologies that help drivers as they manoeuvre out of parking spaces:

Ford has also improved its Active City Stop collision avoidance system, which uses sensors at the front of the vehicle to look for stationary objects in the road ahead and pre-charges the brakes if the vehicle is approaching an object too quickly. If the driver still does not respond the system reduces engine torque and automatically applies the brakes to reduce the impact of collisions. New C-MAX offers the latest system that now operates at speeds of up 31mph, up from 19mph.

In the case of moving objects Active Braking works in a similar way to Active City Stop but with a vehicle speed range of between 5mph and 112mph. It supports drivers at higher speeds, for example on the motorway, by issuing warnings and applying braking as required.

Also new to C-MAX, Ford's Adaptive Cruise Control technology enables drivers to maintain a set distance from the vehicle ahead, even when that vehicle is travelling more slowly than the cruise speed. For occasions when Adaptive Cruise Control is not active, Distance Indication enables drivers to set a preferred distance they would like to maintain with the vehicle ahead. Should the driver get any closer, the system issues a three-stage dashboard display warning – from grey to yellow to red.

SYNC 2 enables drivers to issue simpler "one-shot" navigation destinations, and to ask the system to "play" a desired artist. Simply pushing the voice control button and saying "I'm hungry" will provide a list of local restaurants, which you can then get directions to via the navigation system.

"We have developed SYNC 2 so it is simple and intuitive for drivers to use, and it seamlessly

switches between touch screen and voice commands," said Christof Kellerwessel, chief engineer, Electronic and Electrical Systems Engineering, Ford of Europe. "Drivers will be able to control more in-car systems than ever before, while keeping their eyes on the road and their hands on the wheel."

The new Ford C-MAX will also be offered with a premium sound system that incorporates 10 Sony speakers, including a subwoofer (bass speaker) to deliver a more rounded and deeper sound.

The new C-MAX and Grand C-MAX offer significantly improved CO2 figures and for the first time feature as standard Ford's Auto-Start-Stop technology on EcoBoost petrol and 2.0-litre TDCi diesel engines. The most improved model is expected to offer a 20 per cent reduction in CO2 emissions.

During the first seven months of 2014, more than a quarter of C-MAX models sold in Europe were equipped with the 1.0-litre EcoBoost engine, which in 2014 was named International Engine of the Year for an unprecedented third consecutive year.

The new Ford C-MAX family is offered with LED Daytime Running Lights, Bi-Xenon HID headlamps and Ford's Adaptive Front Lighting System that adjusts the headlight beam angle to one of seven settings depending on traffic and road conditions. For example; when cornering at lower speeds, the system will project a beam towards the side of the road to make cyclists and pedestrians more visible. The system also will support drivers cornering at higher speeds by directing light further into the bend.

The new C-MAX and Grand C-MAX will for the first time offer Ford's MyKey technology, which enables owners to programme a key – usually for younger drivers – that restricts the top speed, reduces the maximum volume of the audio system, and can disable the audio system altogether if driver and passengers are not using safety belts. The system can also prevent the driver from deactivating safety technologies such as Traction Control.

"C-MAX and Grand C-MAX deliver a more relaxing experience with chassis and interior enhancements and, with sophisticated driver assistance technologies," Baumbick said. "The ability to see more clearly in challenging conditions, to detect potential accidents and to keep less experienced drivers safe provide additional assurance and reduce stress for drivers whether at the wheel or not."