The new Ford Mustang fastback and convertible models will go on sale across Europe in 2015 for the first time after 50 years of production, and promise world-class levels of performance and refinement while embracing the Mustang's half-century of heritage and status as a global icon.

"The Mustang's reputation for performance and its iconic status as a symbol of freedom and optimism precedes it even in those parts of the world where the car has never been sold," said Stephen Odell, Ford executive vice president, Europe, Middle East and Africa. "The new Mustang is modern, technologically advanced and forward-looking, without forgetting the heritage that has inspired Ford customers for generations."

More than nine million Mustangs have been sold since it was first launched in 1964. The world's most-liked vehicle on Facebook, Mustang has made thousands of appearances in film, television, music and video games.

The new Mustang has been developed with world-class performance, driving dynamics and usability in mind – and includes a significant amount of advanced driver convenience and driver aid technologies. 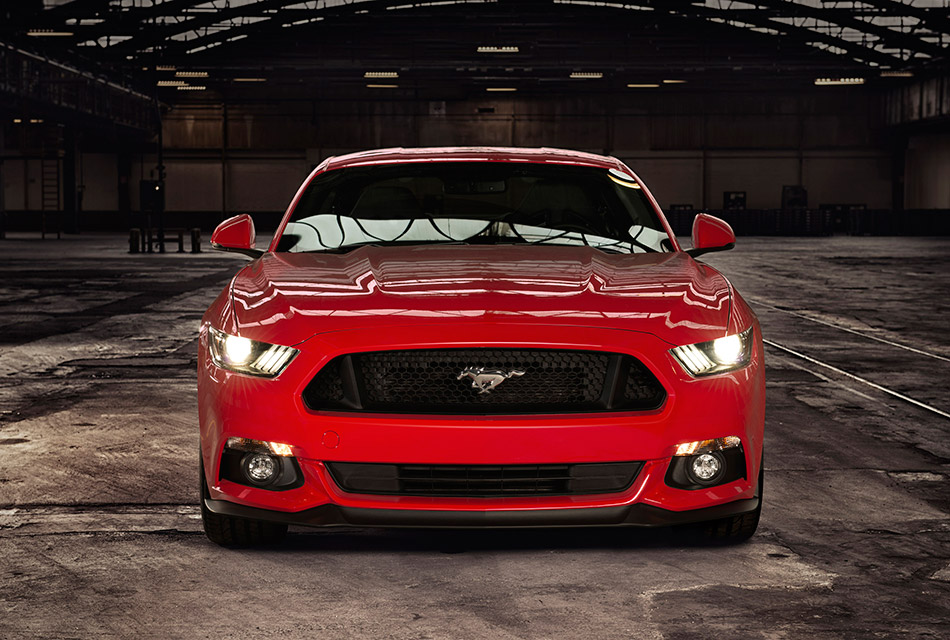 "The new Mustang is one of the most hotly anticipated cars ever, we are very excited to now give drivers in Europe the opportunity to experience the real thing," said Roelant de Waard, vice president, Marketing, Sales & Service, Ford of Europe.

The clean-sheet design of both Ford Mustang fastback and convertible evokes the essential character of the vehicle, retaining key design elements of the classic Mustangs recognisable to car fans across Europe, including the long sculpted hood and short rear deck, with a contemporary execution.

"You only get one chance to make a first impression and when you see this car, you immediately see a Mustang strong and true," said Moray Callum, Ford executive director, design, The Americas.

Ford Mustang convertible drivers will appreciate the standard multilayer insulated cloth top that gives the car an upscale appearance and a quiet cabin. The top has a sleek profile when folded for open-air motoring.

Large, clear instrumentation puts vehicle information right in front of the driver in the roomy cabin with an aviation-inspired cockpit, while ergonomic and tactile switches and knobs provide control. The vehicle's width and new rear suspension contribute to improved shoulder and hip room for passengers and a usefully shaped bootspace that can accommodate two golf bags.

The way Ford Mustang looks, drives and sounds is key to the visceral experience. The Ford Mustang offers outstanding power options and a sophisticated new chassis designed to meet the driving dynamics expectations of European drivers.

"This EcoBoost engine delivers where a Mustang driver expects it to with a broad, flat torque curve that pours out when you stand on it for easy passing or hustling down a twisty road," said Dave Pericak, Mustang chief engineer.

A Mustang for the true driving enthusiast

At the rear is an all-new integral-link independent rear suspension. The geometry, springs, dampers and bushings all have been specifically modified and tuned for this high-performance application, and are well-suited to European roads and high speed driving culture. New aluminium rear knuckles help reduce unsprung mass for improved ride and handling.

The new Mustang features a significant number of innovative technologies providing drivers with enhanced information, control, and connectivity when they want it.

On a twisty back road or a weekend track day, the driver can tap the toggle switches on the console to quickly adjust steering effort, engine response, and transmission and electronic stability control settings using the available Selectable Drive Modes to create the perfect Mustang at any time.

SYNC 2's navigation system also offers a split-screen display with detailed intersections, spoken street names, 3D highway junction and landmark views, and the Michelin travel guide. SYNC 2 enables drivers to issue simpler "one-shot" navigation destinations, and to ask the system to "play" a desired artist. Simply pushing the voice control button and saying "I'm hungry" will bring up a list of local restaurants, which you can then get directions to.

"From day one, we knew if we were going to build a new Mustang, we had to do it right," Pericak said. "We built a new Mustang from the ground up that is fast, great-looking, refined and efficient, without losing any of the raw appeal that people around the world have associated with Mustang for decades."