After getting the BMW E46 scene ecstatic with the 550 PS strong G-POWER M3 with integrated 5.0l M5 V10 engine, by the way the only one on the market, G-POWER launches another product for serious performance upgrade for the BMW M3 E46, that will fascinate the M- enthusiasts. Being the leading manufacturer of after market supercharger systems for BMW automobiles it is no surprise that G-POWER naturally relies on forced induction for its new product based on the premium superchargers from ASA.

And the result is awesome! Despite the fact that G-POWER did not go for the expensive compression reducing forged pistons and even the exhaust system stays untouched, reliable 450 hp and 460 Nm of torque could be realized for the BMW M3 E46. 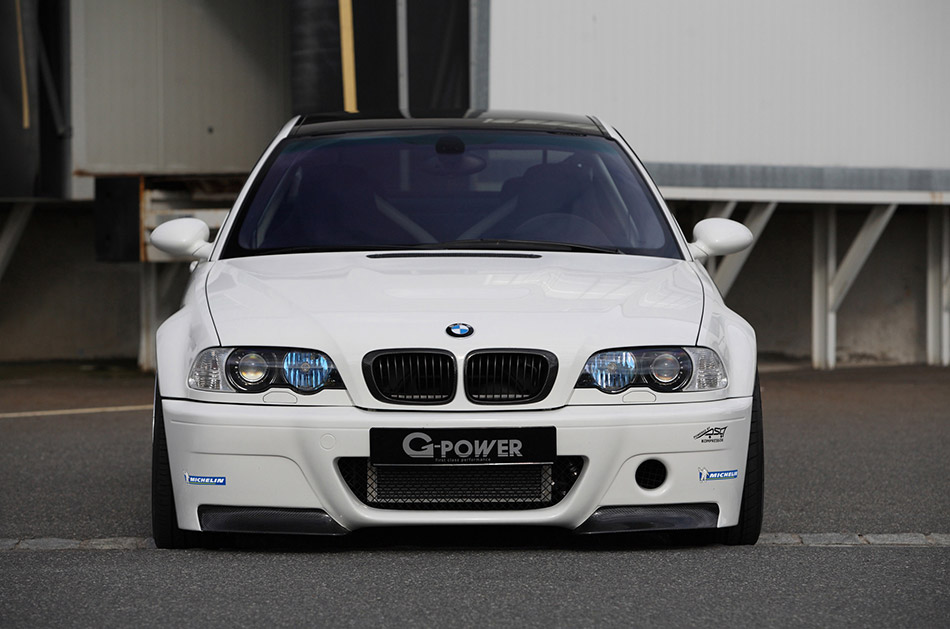 The secret behind this power explosion under the bonnet of the G-POWER M3 E46 is the large ASA T1-518 centrifugal supercharger. By the way, the ASA superchargers are being used in the ALPINA models B5S, B6S and B7 as well, just like the ALPINA B6 GT3 race car, in witch the chargers could state there impressive quality and reliability during several 24th hour race in the "Green Hell" of the Nürburgring! The exclusive use of components meeting OEM standards is one of the basic elements of the G-POWER philosophy and one of the secrets for the extraordinary quality, reliability and performance of the G-POWER products.

Of course a 107 hp additional power leave its marks at the performance figures. The figure from stand still to 200 km/h improves from standard 18,1 seconds to impressive 14,7 seconds. Not bad for a car that has been introduced almost 10 years ago and now is even quicker than the current 420 hp strong BMW M3 V8 with its 15,8 seconds.

Accompanying measures in regards of wheels, suspension, brakes and exhaust system complete the G-POWER program for the BMW M3 E46.

Together with the 20 inch G-POWER "SILVERSTONE DIAMOND" alloy wheels set and the MICHELIN Pilot Sport tyres a top speed of more than 300 km/h is achievable. The G-POWER SILVERSTONE alloy wheels have been exclusively designed for the current BMW models. Due to the successful combination of double spokes and the "concave design" typical of G-POWER they separate the BMW M3 E46 form the rest of the mass production. The G-POWER "diamond cut" provides for the fascinating dynamic appearance of the G-POWER SILVESTONE rim, in contrast to the silver-graphite coated rim body and the bolt applications of stainless steel. An additional feature of the G-POWER SILVERSTONE rim is its weight-optimised design that allows a low rim weight with the same stability, compared to other standard wheels. A perceptibly improved impression of convenience and a considerably increased agility accompany the minimisation of the unsprung mass: advantages of the G-POWER SILVERSTONE rim, which you can factually experience especially in combination with the low-profile tyres from MICHELIN in the dimension 245/30 ZR 20 and 285/25 ZR 20. Further improvement of the road handling is realized through the continuously height-adjustable G-POWER coil-over suspension RS with nine selectable settings each for bound and rebound.

Of course the negative acceleration is in the focus of G-POWER, as well. Even without output increase, the standard braking system may lose brake force when pushed to the limit, accompanied by a moving braking point, the so called fading effect. The perfect cure against the fading effect is a G-POWER Braking System. With its up to six brake pistons and up to 370 mm brake disc diameter for the front axle and 342 mm for the rear axle, the G-POWER Braking System enables a substantially higher brake force than the standard braking system. At the same time, the heat generated due to the braking process can be dissipated more effectively. The G-POWER brake package is completed by brake pads with a larger pad area, higher friction rate as well as metal-coated brake lines. With this set-up, the G-POWER Braking System always provides maximum brake force and the braking point remains precise in any case.