The high-speed test track in Nardo in southern Italy is the ultimate challenge for all vehicle manufacturers. High temperatures and the fastest automobile race track in the world that knows only one load condition: full throttle. The 12.3 km-long route is basically a circle with a diameter of 4 km and an elevated roadway that is reminiscent of a steep curve.  In practice, this results in an infinite straight line for miles of continuous full load driving, an operating condition that puts utmost load on the engine. Add uncomfortably high ambient temperatures and it simply doesn't get any more challenging.

Already for the 4th time G-POWER is meeting the challenge of Nardo and in the meantime has established its very own philosophy. While all other teams send there, for this event especially prepared, cars on a trailer to test track, it has become a G-POWER tradition to drive the participating car the complete one-way distance of 1.500 km to Nardo on its own wheels in a "stock" G-POWER M3 that basically all customers can order in this configuration. 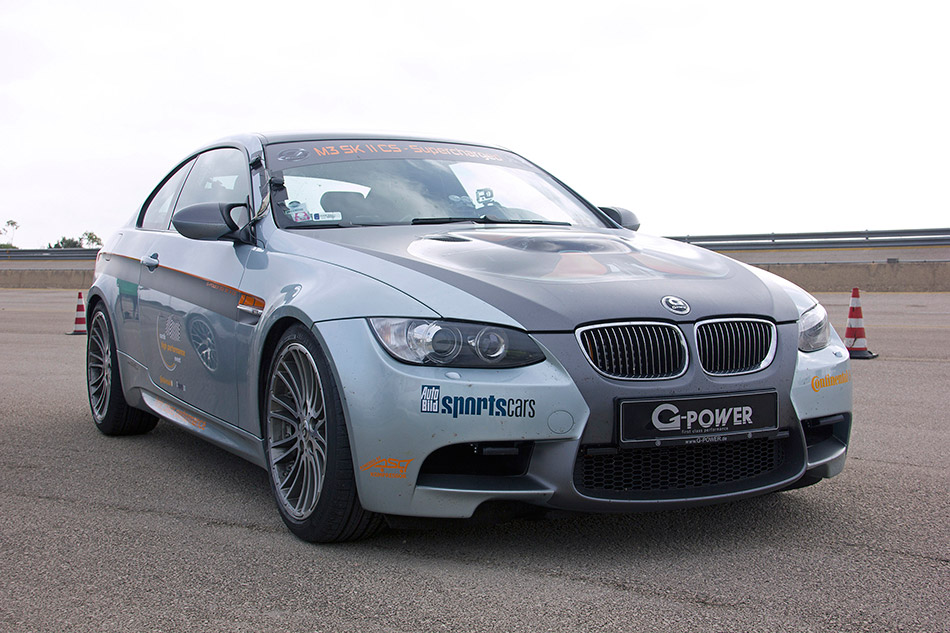 But G-POWER's intention is not just collecting world records per se, but to demonstrate the impressive, real-world performance of the G-POWER supercharger systems and showcase the unrestricted reliability of the engines supercharged by G-POWER. Since Nardo's abusive environment naturally separates automotive wheat from the chaff, only those tuners who have carefully shepherded their design from development to production will survive the extreme loads in the "AUTO BILD SPORTSCARS" High-Performance-Event with no major engine damage. In addition, pushing the system to the top-speed limits in the real-world provides merciless feedback on the achieved performance improvements.  Many tuners instead post performance numbers based solely on short-term dynomometer testing which are subject to many variables, and thus opens the door to abuse.  It is certainly difficult to determine whether performance gains will hold up in the real world if such tests are the only ones performed.

Unfortunately it has not (yet) been possible to already improve G-POWER's record for the fastest BMW M3 at the High-Performance-Event from AUTO BILD SPORTSCARS. A broken part worth a few cents has prevented a better result than the measured 326,2 km/h, still within the limit of the old record.

But for everybody how knows the G-POWER team and their eagerness to succeed, it goes without saying that they wouldn't leave this business unfinished. So it is no big surprise that only two days later G-POWER M3 V8 SK II CS showed its true potential in the course of a follow-up test drive to the Nardo event. In the end the display of the GPS gauge showed an impressive 337,6 km/h – thus G-POWER has improved its own record out of 2011 from 333,1 km/h to 337,6 km/h.

In order to honor this world record for the fastest BMW M3 V8, G-POWER has now introduced a special edition of the M3 V8 SK I, SK II and SK II CS supercharger systems called "HURRICANE 337 Edition". Carbon add-ons and a unique "HURRICANE 337 Edition" graphic design for the air box underline the exclusive character of this, in compliance to the 30 years anniversary of "first class performance", limited special edition of 30 systems.

Core of the M3 V8 supercharger systems is the powerful ASA T1-523 radial supercharger. A High-Flow air intake incl. large racing air filter, a large volumetric intercooler system made from cast aluminium and a cast aluminium air box, set the necessary background to enable the max. boost of 0,5 bar relative, of its strongest version the SK II CS, to produce an power output of 615 hp and 595 Nm of torque. In order to keep the output enchantment weight neutral, G-POWER uses a full titanium exhaust system including a set of racing catalytic converters, which saves 26 kg compared to the factory exhaust system.

The silver BMW M3 Coupé displayed in the press pictures is the first car equipped with a G-POWER M3 V8 SK II CS "HURRICANE 337 Edition" supercharger system that has been delivered to a customer. In addition to the power output enhancement the customer has added to his order the G-POWER G3M CLUBSPOT coilover suspension, the G-POWER breaking system featuring huge 396 mm respectively 380 mm break discs for front and rear axle, and last but not least the 20 inch SILVERSTONE DIAMOND wheel set wrapped with Michelin Pilot Sport tires.