The development of the F 300 Life Jet was initiated by a specific question: how can one combine the feel and cornering dynamics of a motorcycle with the safety and comfort of a car?

Motorcyclists enjoy the freedoms of their vehicles: they lean into bends, sense the power of the engine and the agility, feel at one with the elements and enjoy pure motoring pleasure – all features which the F 300 Life Jet also affords. Over and above this, it offers the advantages of a car: with three wheels, stability is better than on two. The top can be closed, and seat belts are incorporated. The motoring experience can be shared with a second person inside the vehicle, unimpeded by protective clothing, helmet and wind noise. Air conditioning makes for pleasant temperatures.

Until the development of Active Tilt Control (ATC), nobody had successfully designed a three-wheeler vehicle that featured cornering tilt technology. ATC comprises a complex electronic system that calculates the tilt angle in relation to the vehicle‘s speed, acceleration, steering angle and yaw behaviour, so that at all times the body angle corresponds with the actual driving situation. 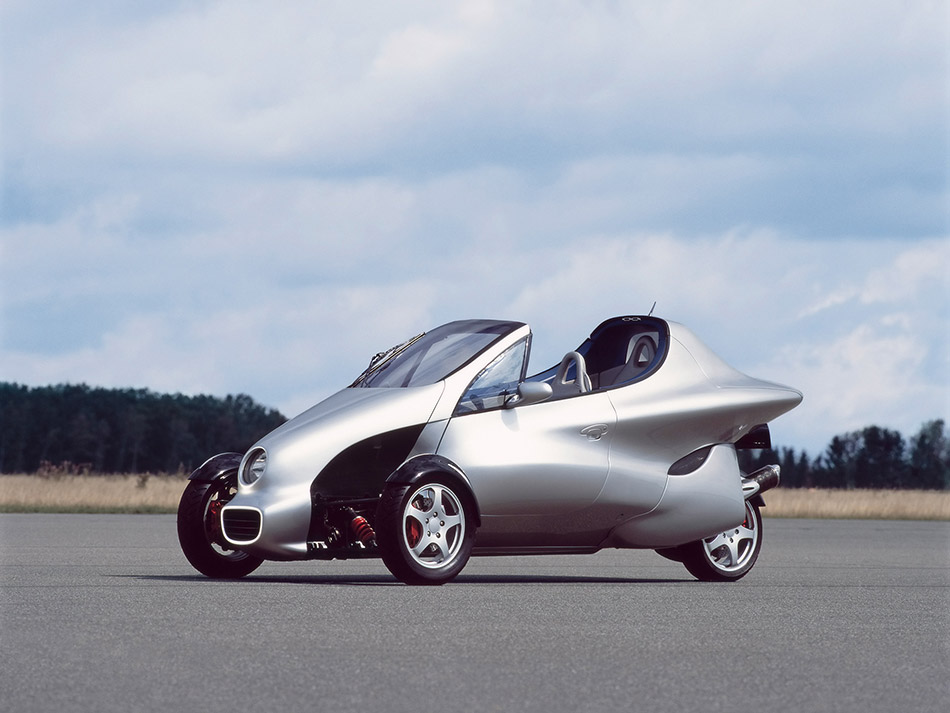 The commands of the electronics are transmitted to a hydraulic cylinder on the front axle. Depending on steering angle, it presses one of the two spring struts outwards so that wheel and body go into the tilt angle figured out by the computer. The maximum angle of inclination is 30 degrees. Special tyres which permit large camber and slip angles were specially developed in cooperation with a tyre manufacturer. The rims of the F 300 Life Jet are made of magnesium and tip the scales at only about 75 per cent of what a conventional aluminium motorcycle rim would weigh.

Lightweight chassis made of aluminium

The chassis of the two-seater is an aluminium construction weighing just 89 kilograms. The bodywork styling is oriented to jet design. It is as long as your standard car, but not as wide – a prerequisite for leaning into bends. The F 300 Life Jet has room for two persons seated one behind the other. The special features of the body include an upward-opening space-saving hinged door for the driver, a hinged door which swings to the rear for the passenger, and a fixed two-part roof made of aluminium and transparent plastic. In good weather the two halves of the roof can be removed in a jiffy and deposited in a stowage compartment aft of the rear wheel, converting the F 300 Life Jet into an open roadster.

The illumination engineering is in keeping with the unusual vehicle concept. The headlight has three reflector sections and two bulbs. The electronics of the headlight ensure the best possible roadway illumination also in bends: they are linked to the computer of the Active Tilt Control and turn the headlight to conform to the body tilt; when required they also cut in a special cornering light. This increases the range of the low-beam headlight by more than 80 per cent. A light sensor controls the beam: the light comes on automatically at dusk or when the vehicle enters a tunnel. Neon lamps are used for the turn signals, stoplights and marker lights. The slender tubes are accommodated in the fenders.

The engine – a 1.6 litre unit from the Mercedes-Benz A-Class – and the electro-hydraulically shifted transmission (shift-by-wire) are installed in a space-saving position between the interior and the rear wheel. Power is transmitted via toothed belt to the rear wheel. 75 kW (102 hp) are good for accelerating from standstill to 100 km/h (62 mph) in 7.7 seconds and attaining a top speed of 211 km/h (131 mph). Consumption is around 5.3 litres of fuel per 100 kilometres (44.3 mpg). The gears are changed by a light forward and backward motion of the shift lever on the right side of the cockpit after stepping on the clutch pedal. This technique is known as "sequential gearshift". It enables particularly rapid shifting and underscores the dynamic character of the F 300 Life Jet.

The cockpit of the F 300 Life Jet is reminiscent of that of an aeroplane. Steering wheel, gauges, shift lever and seats have jet plane character and give the driver the impression that he or she has just taken a seat in the cockpit of an airplane. The segmented steering wheel is also an active element of the "control centre". Buttons for operating the car radio and phone are integrated in the side sections of its impact surface so that drivers do not have to take their hands off the steering wheel.

From the computer into the world of research

The F 300 Life Jet is the first research vehicle to have been designed completely on the computer and then brought to life. It thus served not only to test new vehicle equipment but also a design tool called CASCaDE (Computer-Aided Simulation of Car, Driver and Environment), developed by Daimler-Benz. Very early on, the computer was able to supply information on the drivability of the F 300 Life Jet by means of simulation.
The company opts for out-of-the-ordinary approaches where these serve to advance the automobile and mobility – as demonstrated by the F 300 Life Jet. It may possibly establish a new type of vehicle combining everything that modern people want for perfect enjoyment on wheels: the fresh-air feeling of a convertible, the individuality of a roadster, the performance of a sports car, the comfort of a compact car, and the safety of a Mercedes-Benz.