Does the car of the future still have a steering wheel and foot-operated controls? The Mercedes-Benz F 200 Imagination, presented at the 1996 Paris Motor Show, served to systematically test a new ergonomics concept and was the product of the joint efforts of engineers and designers. Sidesticks – little joysticks in the doors and the center console for steering and braking – replace the steering wheel. The signals are exclusively transmitted electronically to the relevant components (drive-by-wire). Where mechanical elements previously existed, which were directly activated by pulses of force emanating from the driver, these are now linked with electric and hydraulic actuators whose desired actions are determined by electronic pulses.

Sidestick instead of steering wheel

When the driver pushes the sidestick forward, the F 200 Imagination accelerates. If he or she moves the lever to the right or left, the vehicle steers to the right or left. If he or she pulls the lever back, the vehicle brakes and, if desired, reverses after having come to a standstill. To get a little relief the driver can switch the system to the front seat passenger and the latter's sidestick. 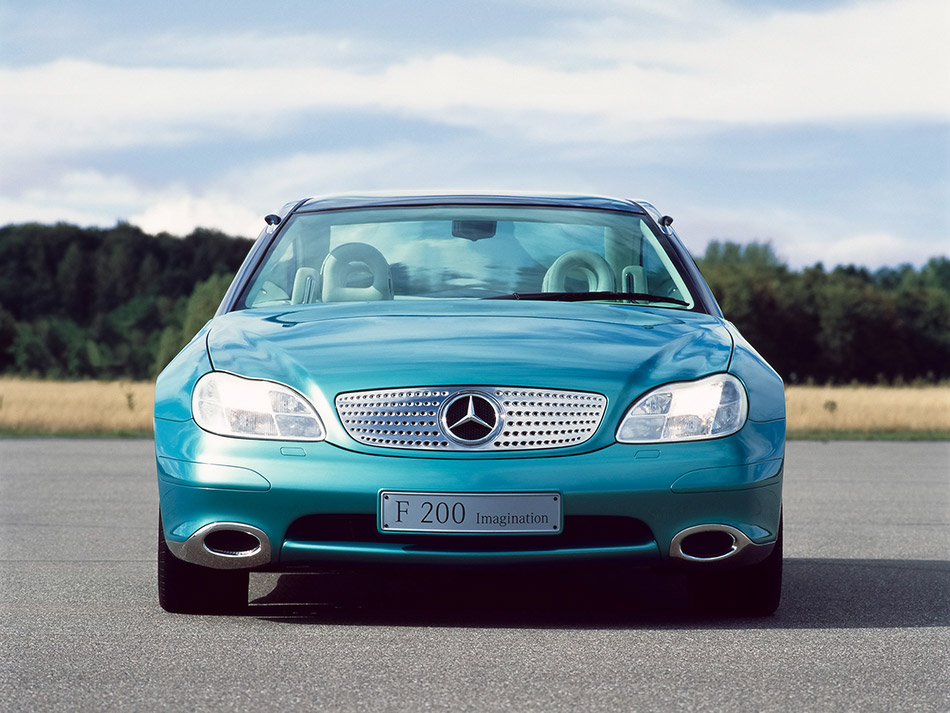 Drive-by-wire is a technical solution entailing consequences, for example, for the interior. If there are no steering wheel and pedals any more, the passengers have more space and thus more comfort. It also enhances safety in that the cockpit and the footwell can be designed completely differently, for instance.

The F 200 Imagination embodies the systematic networking of electronic systems. One result is advanced dynamic handling control. The electronics recognise the driver's commands as requests for a certain driving state – accelerate, brake, steer, reverse – and decide in a flash how to comply with the commands in the best and safest manner. This is situational in nature because the computer utilises the information of various sensors which tell it the road speed, wheel revolutions, engine revolutions, road condition and body motions.

Based on this data, the computer decides, for example, how sharply the wheels should be turned during cornering or what engine speed is appropriate for driving on a wet road. The system is interlinked with the active suspension (Active Body Control, ABC). Even in critical traffic situations, the electronics keep the car safely on course through lightning-fast intervention in steering, braking, engine or transmission management and chassis control.

The driver can fully utilise the technical capabilities of the car without transgressing the physical limits – a genuine advantage for safety. The electronically controlled rear spoiler system of the F 200 Imagination also enhances safety, setting itself upright in a flash and acting as a drag for better deceleration when an emergency braking situation is detected.

The F 200 Imagination research car presents further innovative technology. For example, the headlights feature variable light distribution. Six individual reflectors in each module, each with a separate bulb, are switched on and off depending on situation and speed. This ensures optimum light without dazzling oncoming traffic. In curves, the light follows the wheel angle set by the driver, enhancing safety in night-time driving. At high speeds on motorways, an additional spot reflector is switched on to better illuminate the roadway far ahead. At the rear end there is a very compact taillight unit incorporating nine separate functions: turn signal, taillight, rear fog lamp, brake like, reversing light, rear reflector, side reflector, side-marker light and ambient light. The inconspicuous turn signal is a slender, arched neon tube distinguished by high luminous power and long life.

Debut of the window airbag

Safety has always been written large by Mercedes-Benz, as demonstrated in the F 200 Imagination by the first-ever window airbag which is inflated across the side walls and considerably reduces the risk of head injuries in side crashes and rollovers. Since the coupé study does not have a steering wheel, the front airbags are incorporated in a kneepad underneath the dashboard.

Instead of the conventional rear-view mirrors the experts employ a video system with five permanently installed mini-cameras. Four of them are discreetly concealed in the roof frame struts on each side of the car and, out on the road, constantly have an eye on the areas next to and behind the vehicle. The fifth camera is in the rear bumper and automatically switches on when the vehicle backs up. The images appear on various monitors in the vehicle interior where normally the mirrors would be located.

A large, advanced coupé, the F 200 Imagination anticipated the major design features of the Mercedes-Benz CL (C 215 series) which made its debut in 1999. The F 200 Imagination has a transparent roof to flood the interior with light. Its special feature: the electro-transparent glass can be darkened at the push of a button to avoid excessive heating of the interior due to strong solar radiation. The glass has an intermediate layer, a liquid crystal film made of electrically conductive plastic. Electric current causes its crystals to array themselves so that the glass is transparent. This roof is a standard feature of the Maybach 62.

Especially in the sum-total of its characteristics, the F 200 Imagination is a pioneering research vehicle. Its electronics prepare the ground for new concepts and will play an even greater role in future cars. Thus, the F 200 Imagination was the forerunner of a special Mercedes-Benz SL from the R 129 series, which was equipped with electronic steering and sidesticks for test purposes in 1998 and was used for intensive trial driving.

Steering, braking and accelerating using sidesticks do require one to learn to think differently, but open up new dimensions in respect of driving dynamics, ride comfort and handling safety. The steering ratio and steering forces can be made variable and adapted to the particular situation – differently for parking than for negotiating a fast curve. To brake, the foot no longer has to be moved from the gas pedal to the brake pedal, so that the driver can respond more quickly.