The basis for the electronic output increase is the fact that G-POWER, in contrast to the manufacturer, does not use standard software full of compromises but an individual solution for the engine. Among others, the parameters for the amount of fuel and the ignition timing are modified depending on the increased boost level. In case of the G-POWER Bi-Tronik 5, these modifications are made by a micro-processor that is patched in before the standard BMW ECU. Of course all standard protection and diagnostic functions of the original BMW ECU stay untouched. During the engineering process of the latest generation of the successful Bi-TRONIK the G-POWER R&D department has transferred its experience from the area of supercharging to the turbocharged BMW engines. After all, the ASA supercharger used for the G-POWER supercharger systems is closely related to the turbochargers featured by BMW, since both units us a centrifugal compressor to build up boost. 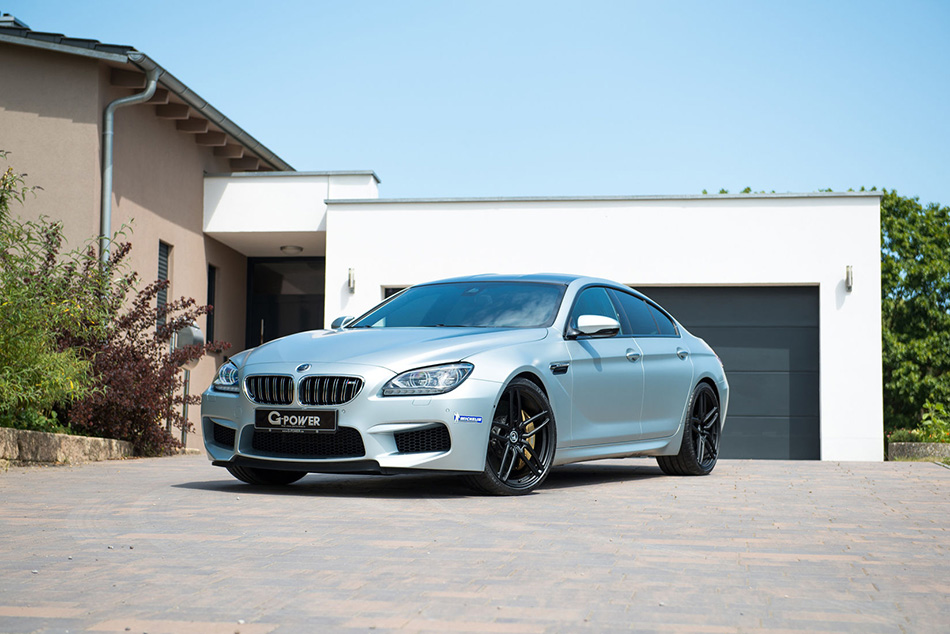 Concerning the suspension at first one will notice the 21 inch G-POWER HURRICANE RR forged wheels, wrapped with tyres from the G-POWER's technology partner MICHELIN in the dimensions 255/30 ZR 21 and 295/25 ZR 21. The double spokes, typical for the G-POWER design, highlight the elegant design of the BMW M6 Gran Coupé. Further improvement of the road handling is realized through the continuously height-adjustable G-POWER coil-over suspension GM6-RS with nine selectable settings each for bound and rebound.

Of course the negative acceleration is in the focus of G-POWER, as well. Even without output increase, the standard braking system may lose brake force when pushed to the limit, accompanied by a moving braking point, the so called fading effect. The perfect cure against the fading effect is a G-POWER Braking System. With its six brake pistons and 420 mm brake disc diameter for the front axle the G-POWER Braking System enables a substantially higher brake force than the standard braking system. In addition the G-POWER ceramic braking system reduces the unsprung mass by 50% percent, compared to a system with steel brake discs. Accordingly the cornering and road handling is improved significantly.

Next to the modifications that increase the power output and performance, G-POWER has reworked the interior of the BMW M6 Gran Coupé completely. Exclusive accessories such as the ergonomically formed sports steering wheel or instruments in G-Power design endow the interior with sophistication much like the noble carbon-leather fitments which can easily compete with the interior of the luxury limousines or Bentley or Rolls Royce in terms of material and production quality. Wherever possible, the plastic surfaces of the standard production M6 cockpit were covered with futuristic high-tech compound materials or soft leather/Alcantara. Visual highlights – in the truest sense of the word – are the illuminated G-POWER logos spread throughout the interior.

The modification of the M6 Gran Coupé's interior by G-POWER is completed by an exclusive multimedia entertainment system that leaves nothing to be desired. Next to a powerful audio system, electric powered iPads in the rear of the front seats, a lowerable main monitor from the headlining and an Apple iMac incl. Apple TV enable leisure time or productive work according to the desires of the car's owner.