With the introduction of the 1999 Odyssey, Honda built a world-class, stylish, performance-oriented minivan capable of uncompromising utility with class leading performance inside and out. The Odyssey became, and continues to be, the minivan standard.

Due to go on sale in late August 2001, the new 2002 Odyssey moves the standard even higher with more class-leading levels of performance, safety and luxury while maintaining the value that Honda customers expect.

For 2002, the Odyssey comes equipped with a class-busting standard 240 horsepower engine (an increase of 30 horsepower), a standard 5-speed automatic transmission (upgraded from a 4-speed), and new standard dual-stage driver's and front passenger's front airbags and standard side airbags . In addition, the new Odyssey sports a retuned and improved suspension and numerous enhancements to the interior including improved seating areas with available leather seats, an available entertainment system with the first factory-installed DVD player in a minivan, plus a host of new convenience features. 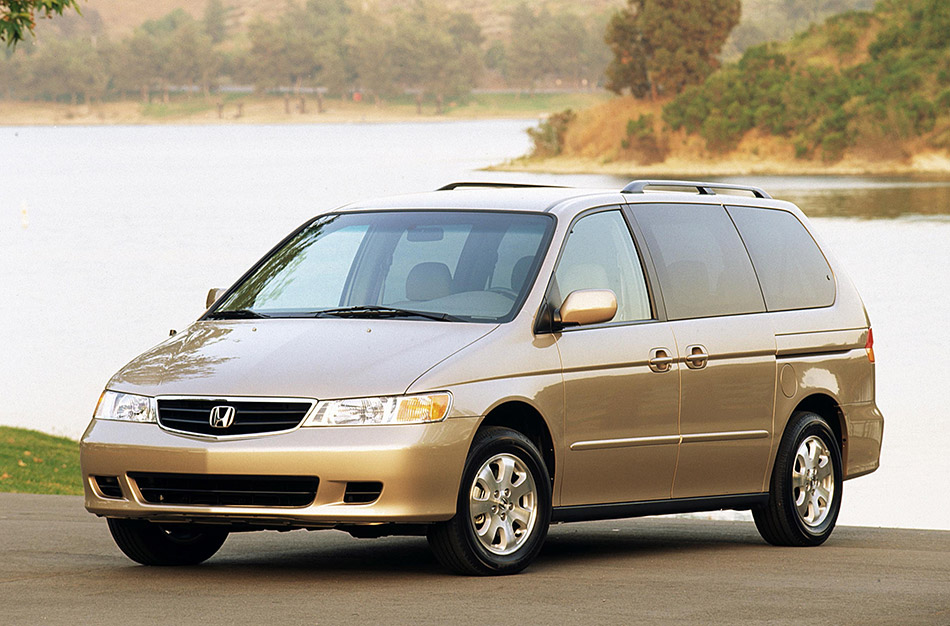 The popularity of the Odyssey has led to the need for increased production capacity. A new manufacturing facility capable of eventually producing 120,000 units per year will open in Lincoln, Alabama, in November. Overall, a large portion of the Odyssey's appeal comes from it being the best value in the minivan segment. With the enhanced levels of refinement and safety in the new 2002 Odyssey, another leap forward has been made to the acknowledged minivan benchmark.

The 3-rocker VTEC system expands horsepower and torque capability by adding increased throttle response at low engine speeds and top-end power at higher engine speeds. Horsepower peaks at 5,500 RPM and torque peaks at 4,500 RPM. Even with the power increases, the 2002 Odyssey is projected to maintain its best-in-class overall fuel economy as well as its 50-state LEV emissions rating. Regular unleaded fuel meets the octane requirements for the engine's increased horsepower and compression ratio (10.0:1) thanks to a highly sensitive engine knock sensor that prevents pre-detonation in the cylinder chambers.

In another first for a minivan, the Odyssey's new 5-speed automatic transmission (upgraded from a 4-speed) combines smooth and quick gear changes with wider ratios for an excellent combination of sportiness and fuel economy. Aided by a sophisticated 16-bit, 20 Mhz transaxle CPU, an active lock-up torque converter, a low friction lubrication system, an efficient one-way clutch and Honda's Grade Logic Control system, the new transmission delivers the highest possible levels of performance, fuel economy and shift quality in an automatic transmission. Additionally, the creative use of the transmission's third gear also acts as the idle gear to provide five forward speeds at about the same weight and size as a typical four speed.

Honda engineers set three primary goals when developing the original Odyssey chassis: First they wanted it to perform like a car with superior ride, handling, maneuverability and braking. Second, to achieve car-like comfort, the design had to have low levels of NVH (noise vibration harshness). Finally, Honda engineers wanted to design and package the Odyssey's chassis components to take up a minimum of space and allow for the maximum amount of room for passengers and cargo.

In keeping with the goal of providing car-like comfort, the engineers revisited the suspension tuning to provide enhanced performance and comfort. The 2002 Odyssey's suspension tuning allows for an improved, more accommodating ride on choppy surfaces without sacrificing any of the Odyssey's high levels of handling performance on smooth and twisty surfaces. To summarize the changes:

The net effect of these three changes results in reduced harshness over bumps with the same responsive sedan-like handling.

Having already earned top safety ratings with its quadruple five-star front- and side-impact crash test ratings, the 2002 Odyssey now offers the latest generation of airbag systems from Honda. Driver's and front passenger's dual stage airbags (SRS) along with driver's and front passenger's side airbags are now standard equipment on all models - yet another minivan first.

Both front airbags have a dual-stage inflator that can deploy the airbag at one of two rates depending on the severity of the crash.

Headlining the long list of improvements for the Odyssey's interior is the availability of leather seating and an all-new Honda DVD entertainment system. Luxurious leather seating and interior trim is available on all EX models and provides an upscale feel and appearance. In addition, leather front seats are electronically heated for maximum comfort.

The Honda DVD entertainment system, the first factory-installed integrated DVD system for a minivan, features an all-new crystal clear 7-inch widescreen LCD display (for optimum visibility) that flips down from the ceiling at the push of a button for rear seat passengers. The extended capabilities of the DVD player allow for either DVD, CD, radio, cassette tapes and auxiliary inputs (such as video games, VCRs or cameras) to be played in the rear seating areas while the front passengers can listen to a different audio source.

The DVD player can be conveniently controlled from three locations - the front audio system controls, the rear seat controls near the LCD screen, or a wireless remote control. Additional audio and video input jacks allow for a wide variety of additional equipment - ranging from camcorders to VCRs to game consoles - to be attached to the system. The system comes complete with two infrared (IR) wireless headphones as standard equipment.

The integration of DVD, radio, CD, cassette and auxiliary controls are designed for ease-of-use and functionality. Audio sound quality has been improved on all models and radio configurations with larger 16cm rear speakers that create more bass and better overall sound quality.

Numerous interior enhancements make the 2002 Odyssey even more functional, comfortable and enjoyable. The column gear shifter has been revised for greater ease of use and the new steering wheel offers increased comfort with a slightly thicker design. The revised horn controls can be used while keeping both hands on the perimeter of the steering wheel thanks to extended horn sensor pad positioning.

Large cup holders now flank the sides of the second row seats (which can still be slid together bench-style. Cargo space behind the third row seats has been enhanced with the creative use of eight bag hooks behind the seat cushion and a hammock-style cargo net. As you can see, Honda has created the ultimate family room on wheels.

While a majority of the enhancements to the all-new 2002 Odyssey focus on performance, safety equipment and interior functionality, the exterior received a few subtle modifications as well. The front-end now features a more aggressive new grille with two horizontal slats and a more prominent H-mark.