Ford F-Series Super Duty customers demand a truck with toughness and capability, yet they still appreciate the amenities that make their driving experience more enjoyable. The 2013 F-Series Super Duty offers both, with a first-ever Platinum series model and the addition of SYNC® with MyFord Touch®.

"The F-Series Super Duty Platinum is the latest expression of Built Ford Tough truck luxury," said Brian Rathsburg, F-Series Super Duty Marketing manager. "It has a distinct appearance and a long list of features to deliver a superior experience. Along with that, it has all of the capability F-Series trucks are famous for."

Building on the success of the F-150 Platinum light-duty series that debuted in 2009, the F-Series Super Duty Platinum offers customers the ultimate in truck luxury. 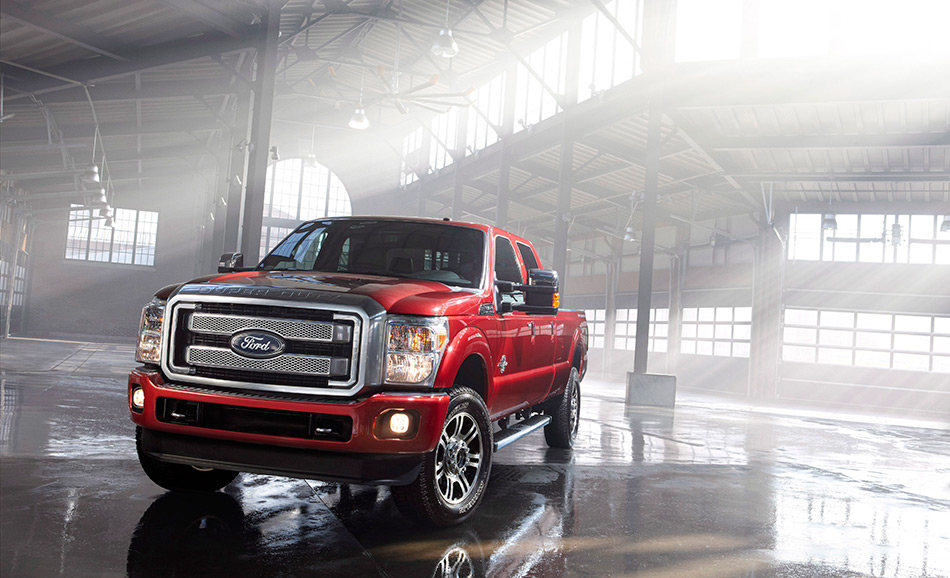 Available only in the Super Duty crew cab, it can be ordered as an F-250, F-350 or F-450 pickup and with the Ford-designed and Ford-built 6.7-liter Power Stroke® diesel engine or the 6.2-liter V8 gas engine.

The Platinum series makes a bold statement with a grille that features a satin chrome surround highlighted by perforated mesh inside. The updated grille is enhanced by a monochromatic bumper and chrome tow hooks.

The exterior of the Super Duty Platinum is lavished in chrome, including the door handles, mirror caps, running boards and exhaust tip. The boxside on both sides of the truck sports the "Platinum" name in chrome letters and the tailgate is trimmed with a satin chrome appliqué, similar to the one used on the F-150 Platinum. Twenty-inch polished-aluminum wheels with painted black inserts round out the stunning exterior design of the Super Duty Platinum.

The interior showcases luxury in the form of unique wood grain appliqués. The steering wheel is heated and leather-wrapped, with genuine wood accents. The instrument panel, center stack and door trims are wrapped in premium wood grain. A new storage area on top of the dash includes two USB ports, audio-video connections, SD card slot and a 12-volt charging port for cell phones and other digital devices.

The driver's seat has 10-way power-adjustable seating and both captain's chairs are upholstered with softer, premium leather, which is also used on the armrests and console. Other evidence of fine craftsmanship includes the seats and floor mats, which feature the embroidered "Platinum" logo.

Other standard features include: 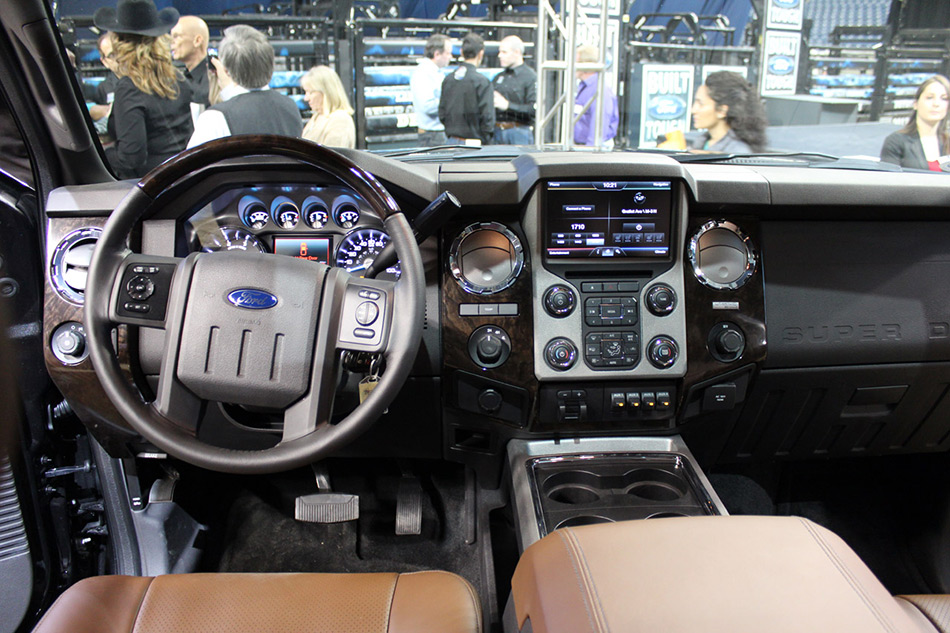 Working harder and smarter
Unlike the past when a truck was often little more than a spartan work vehicle, today's truck customers won't compromise, and they expect capability, efficiency and refinement. The 2013 F-Series Super Duty eliminates any thought of compromise.

Standard Ford SYNCbrings award-winning voice-controlled connectivity into the cab of the most capable heavy-duty trucks available. With SYNC, Super Duty drivers can connect compatible mobile phones and media players via Bluetooth® or USB to make calls and play back music using voice control. In addition, drivers will get access to Vehicle Health Report and 911 Assist®, both no-charge lifetime features, and SYNC Services including traffic alerts, business search and more – all while keeping their hands on the wheel and eyes on the road.

The 2013 F-Series Super Duty builds on the foundation of SYNC with MyFord Touch, which is available for the first time. A new 8-inch, high-resolution touch screen display gives drivers easy access to phone, climate control, entertainment and navigation features along with a dramatically expanded voice control vocabulary.

The 8-inch display screen also provides a large, clear view behind the truck when in reverse to help drivers maneuver in tight spaces or line up conventional trailers with the truck's hitch.

Unique to Ford F-Series, designers have optimized the physical interface for MyFord Touch to accommodate truck users who may be wearing work gloves by providing easy access to climate controls and audio presets on the center stack. For video of MyFord Touch in Super Duty, click here.

The latest example of F-Series leadership in truck design, innovation and technology can be found in the 2013 Super Duty Platinum, available later this year.