Individuality and practical use plus driving pleasure in pure culture. Its bold design, a thus far unequalled interior style in combination with the classic Honda virtues such as guaranteed driving pleasure together with brilliantly low fuel consumption - these are the factors that have made the hatch-back of the eighth Civic generation into the compact class success model.

"It is now time, " explained Yasuhisa Maekawa, Honda R & D Europe Chairman, and Vice-Chairman of Honda Motor Europe, "to expand the family again with the sporting Type S and Type R variants." And he promised: "Their names are in the program: S for Sport and R for Racing." Both the new 3-doors differ from the 5-door by their own design, special driving settings, and in the case of the Type R a brilliant sporty engine - and guarantees an intoxicating blend of exhilarating driving pleasure accompanied by exemplary everyday usability.

"The expansion of the product range," continued Maekawa, "is aimed at fulfilling the expectations of the younger and the young-at-heart customers, for whom an emphasized sporting vehicle character is of the greatest importance." Since the "old" Civic Type R has achieved a huge circle of enthusiasts during the past years, with sales figures surpassing all forecasts, "And it would be foolish," said Maekawa, "not to comply with the wishes of these faithful customers." And on top of everything, this is sufficient reason for Honda to send the most extreme model of the Civic to the start line in three different versions for the first time. 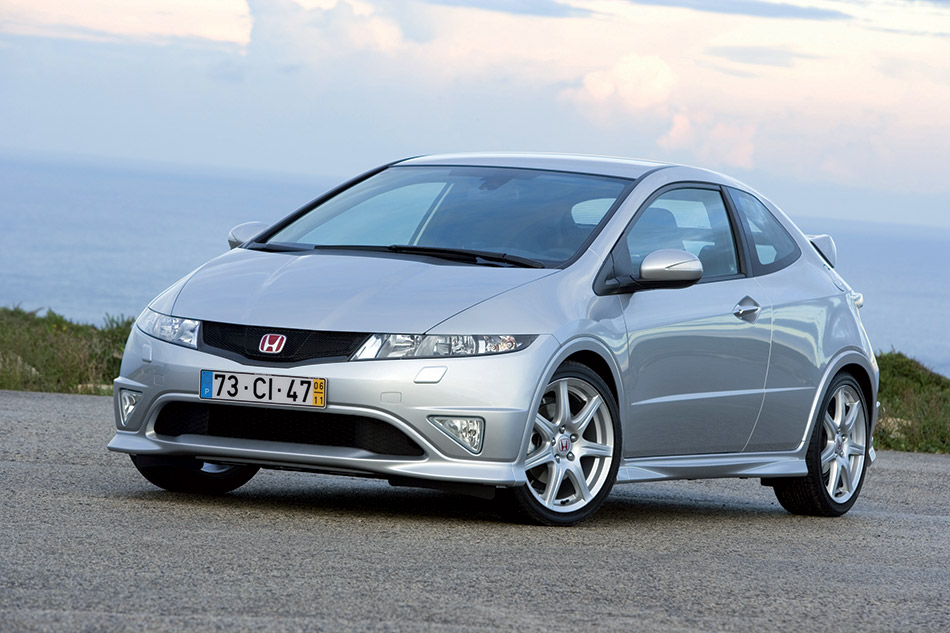 The Type S is powered by either a 1.8-litre petrol or a 2.2-litre diesel engine. Both engines are rated at 140 HP. The suspension is stiffer than the 5-door and has a rear track which is 20 mm wider for higher stability. The Civic Type S becomes available in January.

The power source of the new Type R is the newest development stage of the 2.0L DOHC i-VTEC engine. The extensively improved engine, with an output of 201 HP, is nearly as powerful as in the preceding model, but is even more responsive. The substantially stiffer body - even in comparison with the 5-door model - and the suspension settings with the emphasis on sporting adjustment will only help to guarantee that the hottest Civic ever is a driving experience of a very special kind. This top sports model is in the dealers from March 2007.

The silhouette of the new model is similar to the current Civic 5-door. The individual personality has been realised not by a radical change of line, but rather is characterised by a series of unique details. A more sharply tapering rear side window emphasizes the coupé rear end. The tapering shape of the rear side windows also provides a sleek profile. Bold side skirts, the noticeably widened track and the large-dimensioned wheels (17-inch on the Type S and 18-inch on the Type R) considerably heighten the dynamic look of the two sports cars. In addition, the doors, the rear side panels and the front and rear bumpers have been remodelled.

The special character of the Civic Type R is highlighted by well drawn-down body-coloured front and rear skirts, a rear spoiler plus a radiator grille with enlarged air intake. Type R logos on the front brake callipers enhance the overall sporting picture.

In the Type R and the Type S, the interior layout is based on the same approach as in the Civic 5-door. In all Civic eighth-generation models individual design also provides a generous amount of space for the passengers. The unique concept with the fuel tank located centrally under the front seat gives a low, flat rear floor in the back. With the rear seats folded down, the luggage compartment offers so much space that three mountain bikes (with their front wheels removed) can be accommodated. The stowage capacity behind the front seats amounts to 1,352 litres.

The rear seats feature special kinematics by which the back-rests can be lowered easily and with lightning speed. If the back-rest catch is released and the back-rest part moved forward, it is lowered so that a dead flat loading bay results. If required, even the luggage space can be partly enlarged. For this purpose, the rear seat bench is split asymmetrically (60/40). Thanks to an effective mechanism with easy-running joints, returning it to its original position takes no effort. Beneath the level boot floor is a secondary 70 litre storage area - a suitable place for items that should always be carried but are seldom needed.

The Type S and the Type R have a fascia that is just as modern and functionally laid out as that of the 5-door. The most essential information is placed at the very top of the display and relatively far forward, which distracts the driver less from the actual traffic situation and requires the eyes to adapt less. Secondary information is spaced around this central focus. It is also always in the field of vision but without distracting the driver though excessive dominance.

Compared with the previous generation Civic, the steering wheel is set at a more upright and ergonomically advantageous angle. Both driver and front-seat passenger profit from extra legroom and greater freedom of movement in general on the front seats. The steering wheel is adjustable for height and reach.

The front seats of the Type S have different foam thicknesses at various parts of the seat ensuring enhanced side grip with good seating comfort at the same time. The upholstery is covered with black Alcantara and decorated with silver-coloured stitching.

The interior of the Civic Type R combines elements from motor racing and from high-quality sports cars, thus providing a decent amount of comfort. Large black Alcantara bolsters with red stitching provide the driver and front seat passenger with both good side grip and an ergonomically perfect sitting position. With their red fabric, the seat cushions, backs and rear seats offer a visual contrast. The dials in the fascia are also red illuminated and set off by brushed metal switch panels. The steering wheel is covered in perforated leather with red stitching. The gear-shift knob, machined from aluminium, projects stylishly from a black leather boot - also with red stitching. An added touch of exclusivity is provided by the plaque engraved with the unique serial number of the Civic Type R.

Numerous storage areas and compartments enable you to accommodate driving accessories of various sizes. The glovebox itself has a capacity of 14 litres and contains a separate map pocket inside the damped lid. If required, the glove box can be provided with cold air from the air-conditioning unit, to keep snacks and drinks cool underway. The front door pockets are equipped to hold 500 ml bottles and maps.

The centre pocket is intended for smaller items such as a mobile phone, while there's a double cup holder stored behind the cigarette lighter and ashtray. The centre console box is able to accommodate all sorts of small items, or a music library of up to 22 CDs.

The buyer of the new Type S can choose between two 140 HP (103 kW) engines. The petrol engine is a 1.8-litre SOHC i-VTEC one, which has already made its debut in the Civic 5-door. The diesel unit is a modern 2.2-litre i-CTDi engine. Both are combined with 6-speed manual gearboxes whose careful spread of ratios exploits their potential to the full. Optionally available on the 1.8 Type S is Honda's 6-speed automated manual transmission, i-SHIFT which offers the choice of automated changes or manual changes also via steering wheel mounted paddles.

Among the rev-happy 1.8-litre engine's technical highlights are comprehensive friction-reduction measures and an innovative intake valve timing arrangement. During cruising and low load conditions, closure of the intake valves is retarded and the throttle valve is opened wide to minimise pumping losses. This allows the power-reducing throttle loss to be reduced. Since an open throttle valve would normally cause fierce acceleration, a technical trick is used. Delayed intake valve closure allows some of the air/fuel mixture to be momentarily expelled back out of the combustion chamber, preventing the speed from increasing. In comparison with conventional engineering, the use of this device produces considerable fuel economy.

In other aspects the i-VTEC system operates as it has in the past and switches the valve timing during acceleration to achieve powerful, torquey performance. A drive-by-wire system provides precise control of the throttle while the valve timing is switched over, ensuring the changes are imperceptible to the driver.

These technical enhancements combine to achieve class leading performance that's on a par with a 2.0-litre engine. Acceleration from 0 to 100 km/h of 8.9 seconds (i-SHIFT 10.9 seconds) and fuel consumption of 6.6 l/100 km (i-SHIFT 6.8) Combined, mean it establishes new standards for this size of engine.

The Type R's 2.0 litre DOHC i-VTEC naturally-aspirated engine featuring VTC variable inlet camshaft technology has undergone extensive reworking. It is now more responsive and, thanks to the new electronic throttle valve and the addition of a balancer shaft, is more smooth-running.

The engine continues to offer the same high torque and exciting driving experience as before, but the high rpm VTEC range is now broader and more accessible. The switch to long duration valve timing in the reworked engine covers the range from 5,400 to 8,000 rpm up to the peak power output of 201 HP. With previous engines, this output was available up to a speed of 7,900 rpm. The driver is informed of the cam change via an i-VTEC indicator just to the right of the digital speedometer.

The 100 km/h sprint comes up in 6.6 seconds and top speed is 235 km/h, performance figures that are identical to the Civic Type R in its previous incarnation, yet the engine's delivery is now more harmonic.

Improved aerodynamics in comparison with its predecessor, combined with a gear ratio that makes better usage of the high-revving engine, ensure that the somewhat greater kerb weight is completely compensated for.

The surefooted handling of the Civic 5-door's MacPherson strut/torsion beam chassis provided the ideal basis for the more sporty requirements of the latest Civic derivatives.

The Type R's overtly sporting character is reflected in an even more highly-tuned set up, with unique spring, damper and bush characteristics as well as a 15 mm reduced ride height. In addition, it takes the already stiff Civic body structure and introduces extra strengthening in the forward floor area, around the upper suspension mountings, and across the front of the engine bay to provide a rock-solid platform for even more responsive handling.

Civic Type S and Type R are equipped with ABS, Electronic Brake force Distribution (EBD) and Vehicle Stability Assist (VSA), designed to assist the driver in maintaining control during cornering, acceleration and sudden manoeuvres by applying braking to the right or left hand wheels as necessary and managing the throttle and brake systems.

Passive safety has always been paramount at Honda and as well as front, side and curtain SRS airbags and double pre-tensioners on the front seatbelts, Civic models have an innovative seat belt reminder system for rear passengers displayed on the instrument panel. The SRS unit determines the status of each seatbelt buckle and sends the information to the display.

Active front seat headrests on Type S play a key role in protecting against the unpleasant consequences of a rear-end collision. They are shot forward by the movement of the body and protectively hold the rear of the occupant's head.

The Type R features large supportive headrests that are integral with the backs of the bucket seats.