The 2006 H1 Alpha, featuring GM's Duramax 6600 diesel engine, takes HUMMER performance to its ultimate extension and represents the single greatest advance in the 14-year history of the original HUMMER.

H1 Alpha is the first in HUMMER's new performance series. "Alpha represents HUMMER performance taken to its ultimate extension," said Susan Docherty, HUMMER general manager. "That means improving HUMMER's already-unmatched off-road capability, along with enhancements to fuel efficiency and driving comfort on the road. As the original HUMMER, the H1 is the perfect vehicle to mark the start of the Alpha series."

As was the case for previous H1s, the 2006 H1 Alpha will be offered in both Open Top and Wagon models. The Duramax 6600 replaces the previous 6.5-liter Optimizer Turbo-Diesel, which will continue on as the power plant for the military HUMVEE, the vehicle on which the H1 is based. All commercial H1s produced for the 2006 model year will be H1 Alpha models. H1s used for fleet sales will use the Optimizer engine. 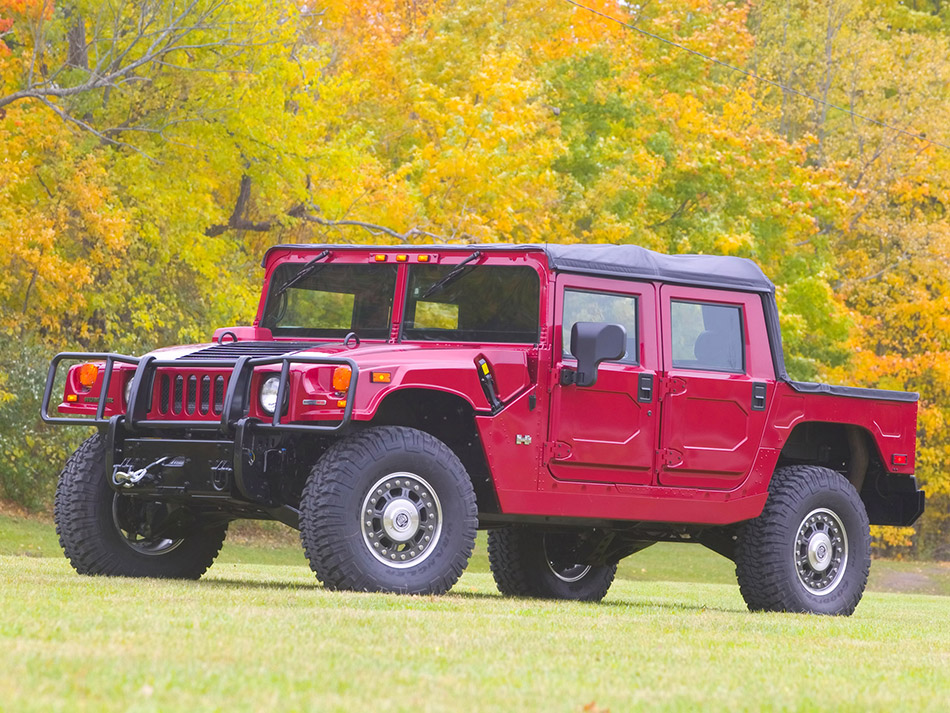 H1 Alpha marks another important aspect of HUMMER's ongoing growth, as the brand introduces new models and makes significant improvements to existing models. The H2 SUT, a new version of the H2 featuring a pickup-style cargo bed, began sales in the summer of 2004. The all-new H3, packing authentic HUMMER design and capability into a smaller and more fuel-efficient vehicle, arrives at dealerships in the spring of 2005.

H1 Alpha is the highest performing H1 ever, with more horsepower, more torque and better fuel economy. The Duramax 6600 delivers 300 horsepower at 3000 rpm, a 46 percent increase over previous H1s equipped with the 6.5-liter Optimizer Turbo-Diesel. Peak torque is a massive 520 lb.-ft. at 1500 rpm, an increase of 18 percent.

The H1 Alpha's increased power makes its already-extreme off-road crawling and climbing ability more potent. On the road, the new powertrain provides smoother, quieter and more comfortable operation, with better acceleration. Zero-to-60 acceleration improves by a full three seconds to 13.5 seconds, respectable for a truck that is an off-road performer without peer.

At the same time, fuel economy of the H1 also improves. Preliminary testing indicates significantly improved fuel economy. A revised fuel system also increases capacity of the H1's two on-board tanks to 51.5 gallons, 9.5 gallons more than previous H1s. The increased tank capacity combines with the efficiency of the Duramax to raise cruising range from 400 miles to an estimated 570 miles between fill-ups.

The Allison 1000 transmission is an important aspect of the H1 Alpha's comprehensive performance improvements. This five-speed automatic from Allison Transmission is extremely stout and durable as it is utilized in medium- and heavy-duty commercial trucks. The Allison 1000 features a Tow/Haul mode that adjusts shift patterns for optimal performance when the vehicle is towing or carrying heavy loads. The Allison unit aids the H1 in severe maneuvers with features such as improved drivetrain braking and a crawl ratio of 45:1, an increase of 22 percent.

With the improved power and efficiency of the H1 Alpha comes an increase in towing capacity. Gross Combined Weight Rating (the sum of vehicle, maximum cargo and towing capacities) increases 2,000 pounds, to 17,300 pounds.

Several other areas of the H1 Alpha also have been enhanced, in addition to the drivetrain. Brake rotors are larger, going from 10.7 inches to 12 inches in diameter. The half-shafts on each axle and the steering gear have all been bolstered to better manage the Alpha's increased capabilities. One of the H1's unique suspension features from its outset are the geared hubs at each wheel that contribute to the truck's incredible crawling and climbing ability. These have been redesigned for the H1 Alpha and feature a helical-cut gear set. This new design improves gear engagement, which reduces both the noise and rocking motion during deceleration and stopping maneuvers.

To accommodate the new dimensions of the Duramax 6600 and Allison 1000, the body of the H1 Alpha is positioned 2 inches higher than the previous H1. This provides slightly more clearance for the body panels from the wheels and from potential obstacles on trails.

Alpha is about performance, more than style. However, there are a few visual enhancements to the H1 Alpha. The new Alpha shield logo appears on a badge just above the rear bumper. A Duramax badge adorns the front driver's side corner of the body, surrounded by a redesigned brush guard. The wheels have also been freshened, featuring a new, brighter finish.