Hyundai's flagship sedan offers a combination of style, comfort and proper road manners. The XG350 for 2005 offers customers a wealth of standard features with two new additions this year to that already long standard equipment list.

An eight-disc CD changer is now standard on the XG350L model and carpeted floor mats are standard on both models. The XG350 is available in two trim levels – XG350 and XG350L.

The XG350L includes all the standard features of the XG350 and adds 12-spoke alloy wheels, Premium Infinity speakers and 210-watt external amplifier, trunk-mounted 8-disc CD changer, power tilt/sliding sunroof, leather-wrapped steering wheel with woodgrain inserts and memory driver's seat. In addition, both front seats are heated. The exterior mirrors have a memory function and an automatic tilt-down feature when the gear selector is put into reverse. 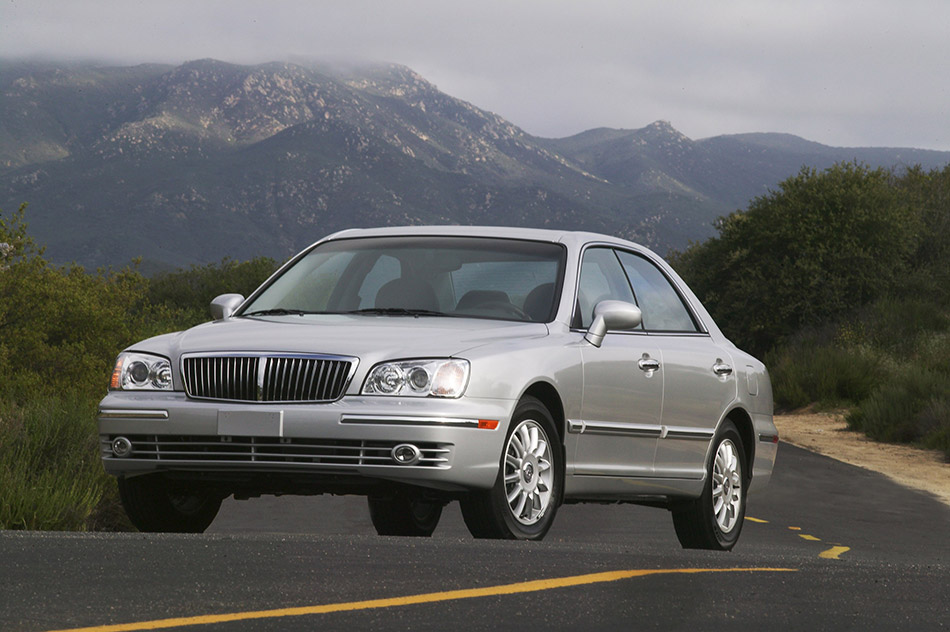 "The XG350 continues to be a great value," said Robert Cosmai, president and CEO of Hyundai Motor America. "It offers the roominess and luxury of cars costing much more and delivers on Hyundai's promise of superior value. The XG350 is an extremely well-equipped vehicle that provides everything a driver would want at a price that represents an outstanding value," he added.

The XG350 is powered by a sophisticated, high-torque 3.5-liter V6 engine. It is a double overhead cam design and develops 194 horsepower at 5,500 RPM and 216 foot-pounds of torque at 3,500 RPM. The engine is mounted transversely and has a variable intake system and anti-vibration balance shaft.

Four-wheel disc brakes are standard on every XG350 model as is the four-wheel, four-sensor, four-channel anti-lock braking system (ABS). Every 2005 model XG350 is equipped with Electronic Brake Force Distribution (EBD) that is designed to enhance braking control. The EBD is a sub-system of the standard ABS system that eliminates the standard front/rear proportioning valve and uses instead precision sensors and electronics already installed as part of the ABS system. The EBD is designed to increase the performance of the rear brakes by delivering ideal brake force distribution to the rear wheels as well as adjust brake proportioning based on vehicle load or weight. The EBD is controlled by the ABS Control Module which calculates the slip ratio of each wheel at all times and maximizes brake pressure to the rear wheels, but never lets it exceed the pressure to the front wheels.

The XG was first introduced for the 2001 model year as the XG300. With each new model year the XG has been refined and enhanced.

For the 2002 model year, the engine displacement was increased from 3.0-liters up to 3.5-liters, and as a result the XG300 became the XG350. Some of the enhancements are easy to see; last year the XG350 was tastefully restyled with a new grille, new headlight design, a new front bumper and a new front air dam with projection fog lamps. The revised front end with its horizontal design airdam gave the XG a wider, more stable look and the projection fog lights gave the front end a more sophisticated look.

Last year there was a new decklid, a new rear bumper, a new taillight design and even the CHMSL (Center High Mount Stop Lamp) was new, using a bright LED light in place of the previous bulb-type light. The license plate location was moved from the rear bumper up to an inset in the decklid, giving the XG a taller, more stately look.

Interior trim refinements included lighter color woodgrain trim with a new pattern. Refinements for the interior included a revised hood release lever, a redesigned tilt steering lever and the child seat tether anchors in the parcel shelf that are covered when not in use. Gas-operated lifters added to the rear decklid make it easier to open. These little changes and refinements added up to delight XG350 buyers.

Other refinements included a redesigned cruise control pod with ribs between the button to improve the "feel" of the switch and a new trunk pull-down handle. Even the small trim details were upgraded. For example, the lower tray of the front center armrest, which was originally uncovered plastic was upgraded and leather-wrapped last year. Upgrades like these show true attention-to-detail.

Many of the refinements and upgrades added to the XG350 last year are not so readily apparent. For one, the size of the front brakes was increased. The diameter of the front brake rotors was increased from 10.9-inches up to 12.1 inches. In addition, the spare tire was upgraded to a full-size Michelin tire mounted on a matching alloy wheel.

When the luxurious Hyundai XG sedan was introduced four years ago, Hyundai asked U.S. car buyers a question. Would they spend nearly $25,000 for a Hyundai vehicle? It turns out the answer is a resounding yes. Sales of the XG, Hyundai's flagship sedan in the U.S. is the largest and most luxurious Hyundai ever sold in the U.S., have exceeded company plans and expectations.